Executives at Bank of America and Citigroup think the opinion you have on their branches may in fact be incorrect.

The hastening change
Many have suggested bank branches and the way individuals interact with their banks are ripe for major change. After all, Pew Research found last year 61% of individuals who use the Internet regularly use it for banking purposes. This is a staggering shift from the 18% seen in 2000.

Countless people have noted the ballooning number of online and mobile banking users at the biggest banks -- consider Bank of America's mobile users climbed nearly 60% over the last two years -- is further evidence of the shifting dynamics between banks and their customers as a result of technological change. 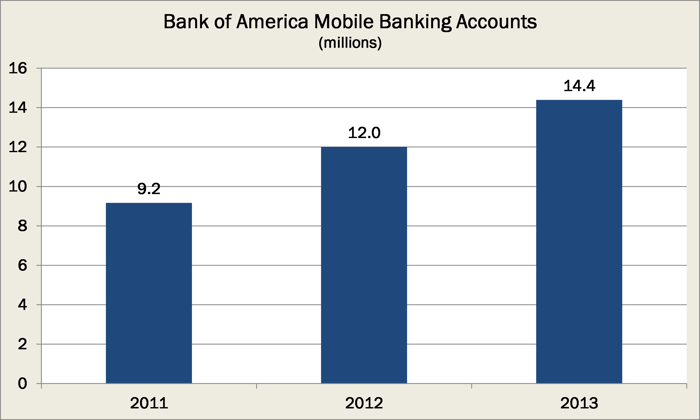 Yet surprisingly, in two separate interviews, the managers of the retail and branch arms of two of the largest banks have suggested notion of bank branches become extinct is actually false.

Simply put, mobile apps and the ATM are rapidly becoming alternative touch points for many customers. But does that mean that bank branches are dinosaurs? The answer is definitely "no."

The same guidance was true from the chief operating officer of the U.S. consumer and commercial businesses at Citigroup. In a separate interview at American Banker's Retail Banking 2014 conference, William Howle didn't outline exact changes Citi would undertake, but when asked about the bank's branches he said, "the number will not change drastically; the composition will change."

The banks are becoming more open to changing the way they interact with their customers. Banks are seeking to shift the way banks are crafted, whether it involves reducing the size, or increasing the different capabilities, in an effort to meet the distinct needs of each and every customer.

Helpful changes
Howle at Citigroup noted part of the shifts in the composition would likely involve three differently sized branches, ranging from "mini" branches between 50 and 500 square feet to its "full-service," branches which were at least 2,500 square feet. The same dynamics were true of Aulebach at Bank of America, who noted the bank has launched its "express banking center," which offers traditional services, but also includes its "ATMs with Teller Assist" that allows individuals to access a teller through an ATM when no in-person help is available.

Importantly each executive noted their banks were not approaching the changes with a cookie-cutter or one-size-fits-all approach. Instead, they will make the decisions on what to do with the branches based on the broader dynamics of the surrounding areas of the branches. It would make sense a customer in Midtown Manhattan would have different desires for the services, hours, and capabilities provided by their bank than a customer elsewhere in the United States.

Why it matters to investors
Americans are becoming more comfortable with using technology to do banking activities, but Aulebach highlighted more than 85% of the purchases of financial products at Bank of America are done in a branch.

This is one of the reasons Aulebach said "we are adapting our banking center network to meet the changing habits and needs of our customers," by doing things like equipping employees with tablets at more than 1,200 of its 5,151 banking centers.

It has long been recognized across industries that those firms who do the best job of recognizing the changing needs and desires of their customers will ultimately be the ones met with success in their business and bottom line. If banks are in turn able to meet customers in ways that lead to higher sales at lower costs -- after all, smaller branches are assuredly less expensive to operate -- it will mean big things to both them, and their investors.