At one time, Abercrombie & Fitch (NYSE:ANF) was on trend. If you wore the brand, it meant that you had money and style.

CEO Mike Jeffries arrived in 1992 and led the brand toward high-end and exclusivity. However, after his 2006 comments about the brand targeting "the cool kids" went viral in 2013, the company suffered a PR nightmare.

Over the past three years, the stock has depreciated 25.17%. Remember, this is during a time that the broader market has reached new highs. Comparatively, Urban Outfitters (NASDAQ:URBN) has seen stock appreciation of 11.36% over the same time frame. However, the two companies' strategies for these brands going forward might not be so different.

Fast fashion
In the past, a retailer would offer a particular style for a season, perhaps much longer. Today, retailers are attempting to keep up with up-to-the-minute trends. This is what today's young consumer demands. Therefore, retailers like Abercrombie & Fitch must figure out solutions.

Free People, a subsidiary of Urban Outfitters, is using the fast-fashion model, and it has so far led to success. Comps at Free People skyrocketed 20% for the fourth quarter year over year. It will also have a plus-size line debuting at New York Fashion Week. This gives Free People, and hence Urban Outfitters, an opportunity to establish itself in a market that Abercrombie & Fitch had alienated for so long.

In a way, Free People is attempting to be the anti-Abercrombie & Fitch/Hollister. With this move, Free People is exhibiting diversity, in contrast to A&F's high-end exclusivity. 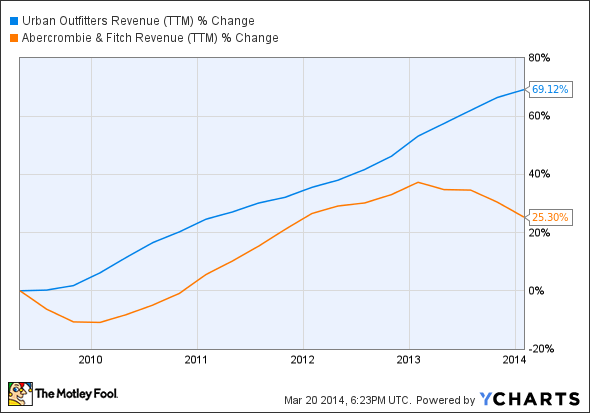 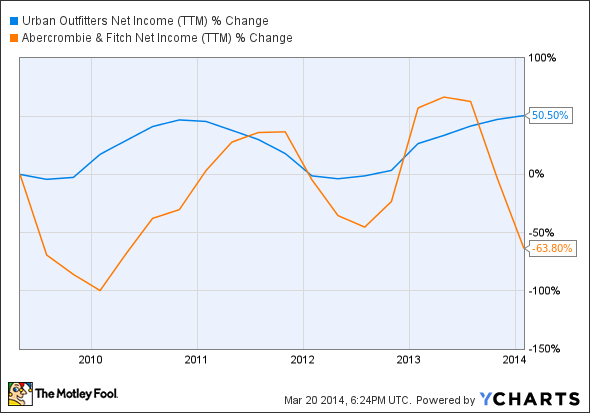 Abercrombie & Fitch will be going after what's hot now, which will require domestic local sourcing. This might increase costs, but that shouldn't be much of an issue since the company is fiscally sound, sporting a debt-to-equity ratio of just 0.11.