Warren Buffett likes to remind investors that throughout the two-and-a-half centuries of its existence, the United States has always rewarded optimists and crushed pessimists. There are many reasons for investors to be pessimistic about the future: High unemployment still stifles economic growth, conflicts and heated rhetoric are boiling up around the globe, and the five-year bull market has to come to an end sometime.

Nobody knows what tomorrow holds, but the future usually rewards the optimists. In that case, investors would do well to take a closer look at Coca-Cola (NYSE:KO). The company will survive as long as the earth continues to spin and will thrive if the global economy returns to its former strength.

A bleak outlook
Coca-Cola had a rough year. After getting off to a strong start to the decade, the company's global volume grew just 2% in 2013. Moreover, the stock significantly underperformed the S&P 500 index even after including Coca-Cola's above-average dividend. 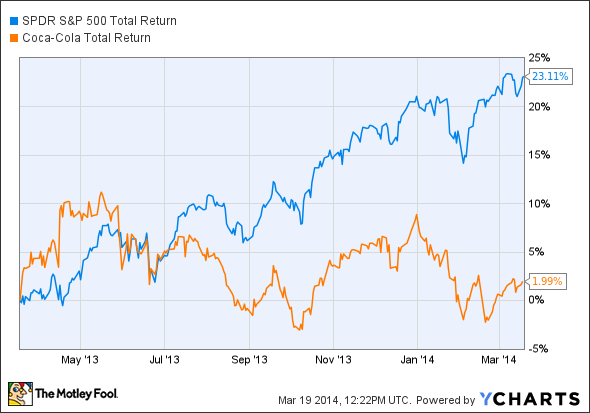 The entire soft-drink industry is struggling, and investor sentiment could not be worse. The conventional wisdom is that soft drinks face an uphill battle in the U.S. and that global volume growth will be challenging given the turmoil in emerging markets. Against this backdrop of pessimism, optimists may find opportunity.

However, Coca-Cola can probably do better than 2.8% volume growth. There are two key ways in which the company can grow volume. The first is by increasing its emerging markets exposure.More people drinking more Coke
Per capita consumption growth is the key to Coca-Cola's prosperity. From 1992 to 2002, worldwide per capita consumption of Coca-Cola's beverages grew at a 4.6% annual rate. From 2002 to 2012, it grew at just 2.7% per annum. If the growth rate declines by 40% again in the next decade, worldwide per capita      consumption will grow at just 1.6% per year. After adding in 1.2% annual population growth, Coca-Cola is looking at about 2.8% annual volume growth over the next decade. That's a little below the 3% to 4% annual volume growth the company needs to achieve its 2020 Vision.

Coca-Cola's hand is weaker in developed nations, especially in the U.S., but it has better options than most give it credit for. PepsiCo's Good-For-You and Better-For-You products give it a head start in the race to bring alternative beverages to market, but Coca-Cola is right on its tail.

Reason to be optimisticBottled water is a bright spot for Coca-Cola. Led by Smartwater and Vitaminwater, bottled-water volume grew 5% in 2013 -- far outpacing soft-drink growth. Despite trailing PepsiCo in other non-soft-drink categories, Coca-Cola leads with a 13% share of the bottled-water market compared to its rival's 10% share. Ready-to-drink tea and juice drinks provide further growth beyond soft drinks. Coca-Cola's tea volume grew an amazing 11% in 2013, while its juice volume grew a respectable 5%.

About 75% of Coca-Cola's volume is derived from soft drinks; that number will shrink in the coming years as alternative beverages like bottled water, tea, and juice drinks offset the decline in soft-drink sales. At a forward price-to-earnings ratio of 16.5, Coca-Cola trades below its historical price-to-earnings ratio, which is often in the high-teens or low-20s.

Moreover, the company generates free cash flow equal to about 5% of its market capitalization. As per capita consumption increases, free cash flow will increase as well. If the company grows volume at 3% per year, Coca-Cola's pricing power will enable it to grow free cash flow at an even higher rate. No matter how you spin it, investors who buy Coca-Cola today are set to reap high single-digit annual returns in a poor outcome and double-digit annual returns with a better outcome. Even for pessimists, that kind of scenario should be attractive.