Already five years into the latest bull run, investors can be forgiven for having a tough time finding great companies whose stocks are reasonably priced. But one of the biggest international technology companies out there, Baidu Inc. (NASDAQ:BIDU), is ripe for the picking.

Shares of Baidu, China's largest Internet search engine, already account for roughly 12% of all of my stock holdings, but that's not going to stop me from buying more for my Roth IRA. Every month for the past three years, I've been telling fellow Fools what stock I'm purchasing for my Roth and why.

Over that time frame, this portfolio has returned 33%, which is outpacing the broader market by about 10 percentage points.

Read on to see why I think Baidu is such a good buy today.

China is still just beginning to come online
There are two megatrends that lead me to believe that the days of rapid revenue growth for Baidu are just getting started. First, China is home to the largest population of humans in the world. It just so happens that the behaviors of those humans are changing, and they're changing in a way that benefits Baidu.

The easiest way to see this is by simply looking at the rapid growth of the Chinese economy. While some may say that the days of a booming Chinese economy are coming to a close, its worth pointing out that even if China's GDP growth is cut in half, it's still far greater than most of the world's "mature" economies. 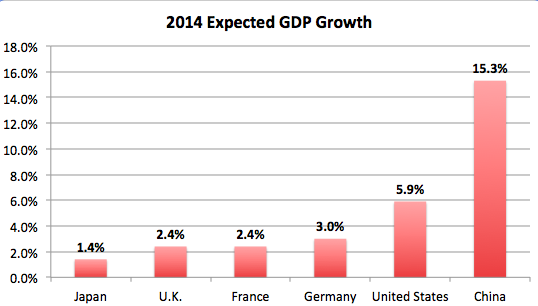 Furthermore, Internet penetration in China is still relatively low. And given the country's sky-high population, there are literally hundreds of millions of Internet users still about to come online in China over the coming decade.

Again, next to mature economies, there's simply no comparison. In fact, simply telling you what the penetration rates are isn't enough. You have to see the following graphic to get an idea for what I'm talking about. 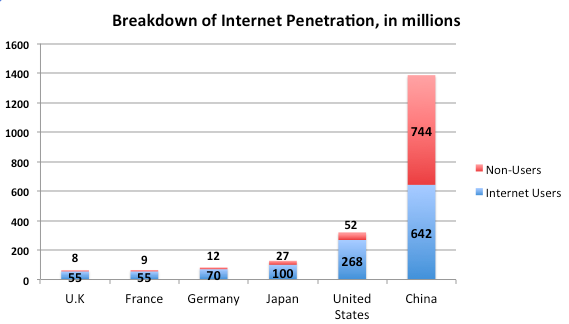 As far as Baidu is concerned, the more the economy grows, the more companies will be spending on Internet advertising -- which is where Baidu gets the bulk of its revenue. And as more and more Internet users come online, there's even more incentive for businesses to use Baidu to advertise.

A safe moat
Of course, when a market has this type of opportunity, there's bound to be some competition. In some respects, Baidu dodged a bullet when Google (NASDAQ:GOOGL) decided to effectively leave the country because of its prohibitive stance on individual freedoms, privacy, and liberty.

Globally, Google has about an 80% share of the search market. But within China, Baidu is easily the top dog. 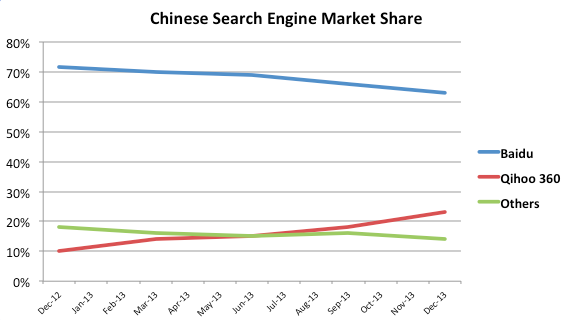 Qihoo 360 (NYSE:QIHU.DL) has been a pesky thorn in Baidu's side, and if the trends from 2013 continue, it'll be worth re-evaluating just how much of a moat Baidu really has.

Baidu already started flexing those muscles last year, when it announced the acquisition of leading mobile apps company 91 Wireless. But it hasn't stopped there. In fact, even though revenues are expected to grow by 47% in 2014, earnings are only expected to pop 9%.

Usually, that's bad news, but not here. Baidu is spending money to reinvest in its business and build an even wider moat around its search engine -- especially in the mobile realm. Over time, I believe that will help keep Qihoo at bay.

A compelling price
So what would you pay for a company that is: headquartered in the world's largest country which growing its economy at a very brisk clip; with hundreds of millions of Internet users about to come on-line; and revenue growing at almost 50%?

I would think anything below a P/E or P/FCF of 40 would be a pretty solid bet (I don't mind paying up for quality companies with great opportunities). But one look at today's price, and you see that Baidu is very reasonably priced, especially when compared with its much larger peer, Google.

For all of these reasons, I'll be adding even more shares of Baidu to my family's holdings. Though all investors have their own unique considerations, I think it's worth figuring out whether Baidu belongs in your portfolio as well.