Learn how Alibaba became the largest e-commerce company in China.

Alibaba Group, the largest e-commerce player in China, could become the biggest-ever initial public offering in the tech space. The company's listing on either the New York Stock Exchange or the Nasdaq could come as soon as the end of July, according to Reuters.

With more employees than Yahoo! and Facebook combined, Alibaba's sites are said to account for nearly 60% of the packages delivered in China. The company is by far the king of e-commerce in the second largest economy, as two of its websites handled over $170 billion in sales in 2012, way above the combined sales volume of competitors eBay ( EBAY -4.38% ) and Amazon.com ( AMZN -1.53% ). Alibaba's dominance is admirable, especially if we consider that China's online retail industry is full of competitors, from online discount retailer Vipshop Holdings to sites focused on business-to-consumer such as E-Commerce China Dangdang. How did Alibaba conquer China's retail industry?

A long journey
Alibaba Group began operating in 1999, with the web site Alibaba.com, which was conceived as a business-to-business portal that would connect local manufacturers with overseas buyers. The website was the second serious attempt of Jack Ma, the founder of Alibaba, to conquer China's e-commerce space. Previously, he had launched Chinapages.com in 1995, a directory of companies.

Although Alibaba.com was quite succesful, the company barely survived the dotcom bubble crush in 2000. The real uprising of Alibaba Group came with the release of Taobao in 2003, currently the largest online shopping marketplace for consumers in China.

Swift guanxi
Only two years after its release, Taobao overtook rival eBay, which was the previous leader in the consumer-to-consumer segment in China.

To capture market share from eBay, Taobao equipped its marketplace with tools that would allow a strong relationship between customers and suppliers. This strategy was consistent with China's focus on "swift guanxi," a concept that involves building high-quality social interactions before doing business.

Unlike eBay and other rivals, Taobao offered users several tools to carry out social interaction from a very early stage. For example, Taobao developed the Wangwang chat program, which allows users to ask any questions to the seller. Of course, bargaining is also possible.

Not surprisingly, Taobao customers spend on average 45 minutes using instant messaging and chat rooms to ask sellers questions about themselves and their products before doing a purchase. By helping buyers and sellers to build close personal relationships, Taobao quickly became popular.

Thanks to the massive success of Taobao, in the fourth quarter of 2012, the gross merchandise of Alibaba surpassed the combined volume of Amazon.com and eBay. Moreover, although other competitors have started to focus on "swift guanxi" as well, Taobao now enjoys enormous enormous scale advantages and network effects, as it has become a gigantic bazaar with roughly 760 million products. 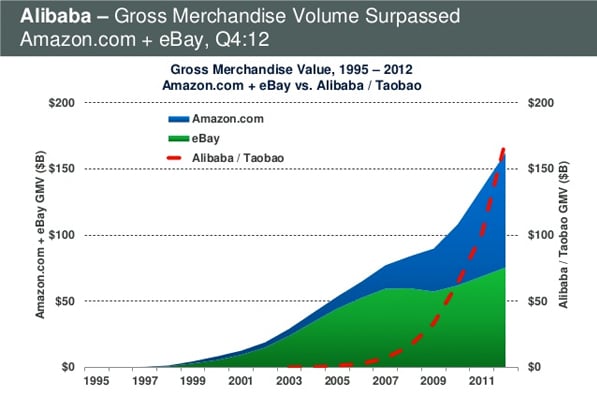 Diversification
To remain competitive, Alibaba is constantly adding new features to its services. For example, to solve the problem of buyers trusting unknown merchants, the company created Alipay, an online payment escrow service that currently accounts for roughly half of all online transactions within China. The company's also going beyond the traditional scope of e-commerce, as it launched a money market fund that allowed its sellers to reinvest the gains obtained from Taobao. In only eight months, the fund became one of the world's largest.

Final Foolish takeaway
In the past ten years, Alibaba has built a massive online empire in China. Like Amazon.com, the company operates in the business-to-consumer segment via Tmall.com. However, the real star product is Alibaba's marketplace Taobao, which has more than 760 million products listed. Furthermore, like eBay's PayPal, Alibaba is well aware of the importance of having its own online payments platform. As the owner of one of most well-diversified, successful portfolios of Internet assets, Alibaba is likely to become one of the largest initial public offerings in the tech space, raising about $15 billion.