Imagine an electric vehicle like the Tesla Model S with a range greater than 1,000 miles. Sounds crazy, right? It may not be as far off as you think. Hydrogen fuel cells in place of tradtional batteries could actually make this possible, and fuel cell system companies like Plug Power (NASDAQ:PLUG) and Ballard Power Systems (NASDAQ:BLDP) are starting to test the waters with this very idea. For it to be possible, though, there is one great challenge that fuel cells will need to overcome: infrastructure. Let's take a look at why fuel cells could make batteries obsolete and why it will be so difficult to implement.

There are several potential benefits to this type of technology. Not only does it make the time to recharge a fuel cell similar to the time to refill a gas tank, the energy density of hydrogen fuel cells -- the total amount of energy that can be stored in a certain weight of that material -- has been shown to be six to eight times greater than the most advanced lithium ion battery on the market today.

The golden fleece
So far, fuel cells have proven to be effective options in some rather niche markets. Plug Power has developed a fuel cell system for material handling equipment such as warehouses, and it is starting to see some commercial success. It recently announced that it had secured an order for more than 1,700 of its fuel cell systems -- a device that can replace lead-acid batteries in existing equipment -- from Wal-Mart. However, the markets that have shown to be receptive to fuel cells so far have been very limited ones. The entire North American market for material handling equipment is only $800 million, and it's hard to imagine Plug Power capturing 100% of that market.

The true prize that fuel cells would like to capture is to replace batteries in electric and hybrid vehicles. According to a recent outlook report from Royal Dutch Shell, electric, hybrid, and hydrogen powered vehicles will represent more than 40% of all vehicles on the road by 2050, and these technologies along with natural gas engines will completely replace liquid hydrocarbon fueled vehicles (gasoline and diesel) by 2070.

In no way are either Ballard or Plug Power ready for a market of that size, but they are starting to test the waters. Plug Power also recently signed on to do a test project with FedEx to use Plug's fuel cell system in electric hybrid package delivery trucks.

What's holding back fuel cells?
As promising as fuel cells may seem, you would be surprised to know how difficult it is to secure hydrogen. Even though hydrogen is one of the 10 most abundant elements on this planet, the only way that we have found to successfully produce hydrogen gas is through a process that transforms methane to hydrogen, and the infrastructure for hydrogen is weaker than any other alternative fuel out there.

Just take a look at these three images, all are from the Department of Energy's Alternative Fuels Data center.

These are all of the publicly accessible charging stations for electric vehicles: 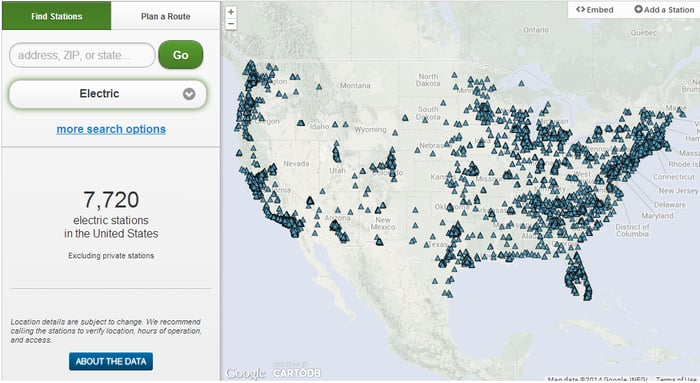 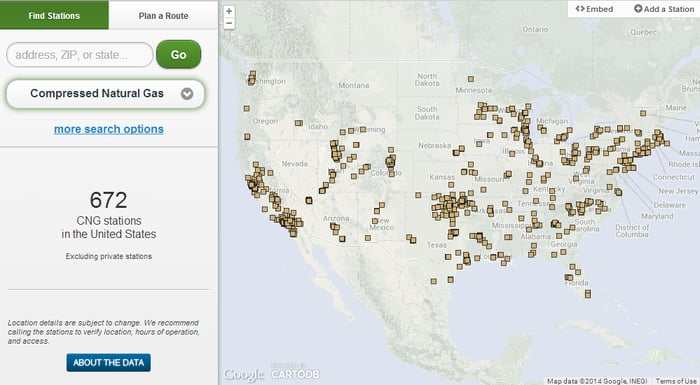 Both electric and electric vehicles have struggled mightily to break through as a fueling option for the everyday consumer, and so companies in this space have turned to alternatives. Tesla Motors has been both building its own fueling infrastructure as well as selling at-home charging stations. Natural gas engine supplier Westport Innovations, on the other hand, has focused its efforts on fleet vehicles and long-haul trucking because it will be easier to build out infrastructure for these groups of the transportation market than for the everyday consumer.

Just to get a sense of how far these fuels have to go, a study by Morgan Stanley estimates that it will require 53,000 fueling stations nationwide before we start to see universal adoption of either of these fuels as viable alternatives to gasoline for vehicles.

As much ground as these options have to cover before they can be seriously be considered competition for gasoline, they are both light years ahead of hydrogen fueling infrastructure.

These are all of the publicly accessible hydrogen fueling stations in the U.S.: 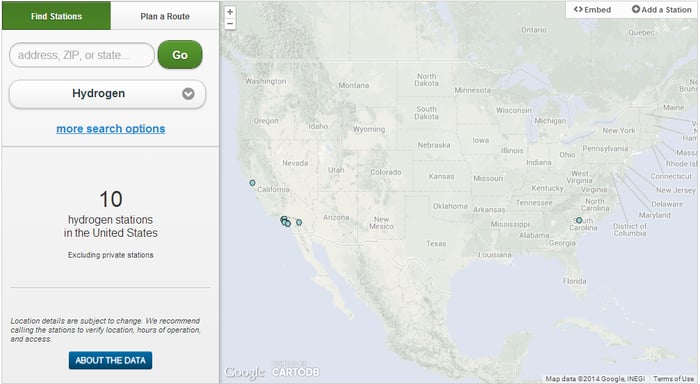 And the lack of fueling infrastructure is only half of the issue. There is also a severe lack of hydrogen production capacity in the U.S. Despite the small size of Plug Power, its fuel cell systems already account for more than 2% of the entire nation's consumption of liquid hydrogen. Another fuel cell manufacturer, Fuel Cell Energy (NASDAQ:FCEL), is looking to take that problem on. It hopes to use its current direct fuel cell power generation stations -- a system that produces its own hydrogen using methane -- into systems that produce excess hydrogen that can also be used as hydrogen fueling stations. It helps, but it is a drop in an ocean compared to the total hydrogen and fuelings stations that will be needed to make fuel cells a more viable technology.

What a Fool believes
The potential is there for fuel cells to have a huge impact on the way we produce and use energy, but we are still a long ways off before any significant changes. Plug Power and Ballard have found a way to make fuel cells viable for a couple of niche markets, and those small amount of sales will certainly help keep buoy these businesses from needing to dip into the equity markets again and again like they have over the past several years. For any fuel cell company to become a major player in the energy space, though, it will need to seriously address the lack of hydrogen and hydrogen infrastructure.