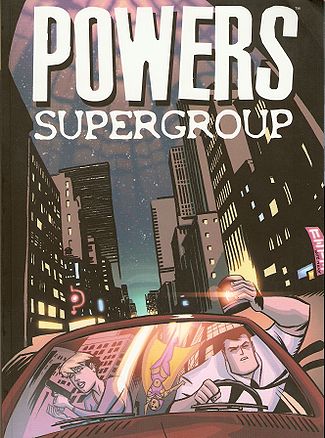 A live-action adaptation of Powers is coming to the PlayStation Network. Source: Wikimedia Commons.

Sony (NYSE:SONY) wants the PlayStation Network to be more like Netflix, serving original content that you'll make time to tune in for. Its first live-action original series: Powers, based on the acclaimed comic book series by Brian Michael Bendis and Michael Avon Oeming. What can investors expect?

Host Ellen Bowman puts this question to Fool analysts Nathan Alderman and Tim Beyers in this week's episode of 1-Up On Wall Street, The Motley Fool's web show in which we talk about the big-money names behind your favorite movies, toys, video games, comics, and more.

Nathan says that, while the deal probably doesn't mean much for Sony, it's a win for Hollywood in that studios now have more outlets for original content. And not just on the PlayStation Network.

Microsoft (NASDAQ:MSFT) last year announced plans for a Halo Xbox TV series from no less than Steven Spielberg. It's a fair bet that both console makers will continue commissioning original content for their respective platforms.

Tim says Sony is smart to be giving gamers a reason to stick with its gaming platform. A more beefed-up PlayStation Network can accomplish that while giving Sony an outlet for airing programming it can license elsewhere, a strategy we've seen the company pursue in arrangements with other studios.

Now it's your turn to weigh in. Will you tune in to watch Powers on the PlayStation Network? Please watch the video to get the full story, and be sure to check back here often for more 1-Up On Wall Street segments.