Apple (NASDAQ:AAPL), Google (NASDAQ:GOOGL), and Microsoft (NASDAQ:MSFT) have all played critical roles in the rapid evolution of the tech sector. However, their growth in the lucrative health care sector is often overlooked.

According to a 2013 survey by the Ponemon Institute, outdated tech costs U.S. hospitals approximately $8.3 billion annually. It's a problem the government is addressing with the HITECH (Health Information Technology for Economic and Clinical Health) Act, which allows hospitals and practices to qualify for government subsidies by upgrading their aging technologies.

The HITECH Act has created a lucrative opportunity for Apple, Google, and Microsoft to expand, and each tech titan is taking a unique approach to conquering this new market.

Apple iOS: Strength in unified tech and U.S. market share
Apple's iOS devices are already frequently used in hospital settings. Most EHR apps are initially developed for iPads and iPhones. Cutting-edge tech such as iRobot's RP VITA and IBM's Watson rely on the iPad as a control panel. New peripherals, such as portable ultrasound wands and ECG monitors, use the iPhone as a central control hub.

Apple's key strength is that its devices across the same generation all share identical software and hardware configurations. Therefore, iOS is a much simpler development platform than Android, which is fragmented across a wide variety of devices from different manufacturers. There can be little margin for error with health care apps and peripherals, so iOS remains a favorite choice among medical tech developers.

Nuance (NASDAQ:NUAN), the developer of Siri, enjoys a major presence in health care with Dragon Medical 360, a software suite which allows doctors to dictate patient data at the point of care via an iPhone. Products like Dragon Medical 360 are directly dependent on the relaxation of BYOD (bring your own device) rules in U.S. hospitals. 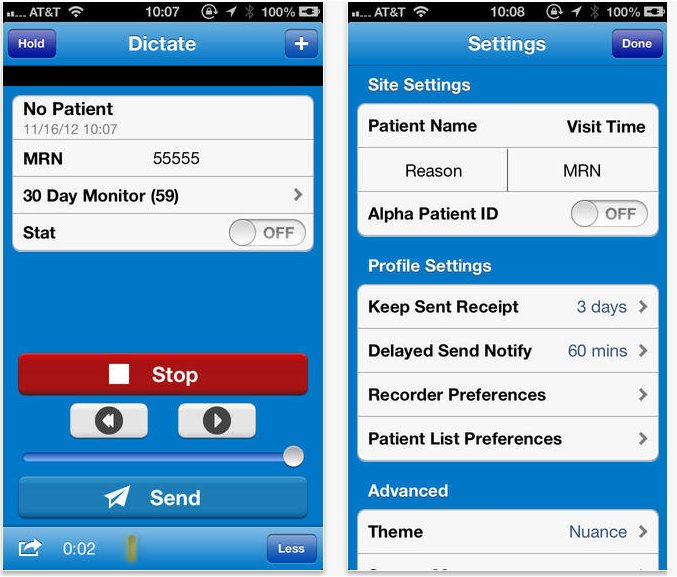 Since many doctors already own smartphones and tablets, allowing them at work can help rapidly improve a hospital's connectivity and productivity. Since Apple remains the largest smartphone brand in the U.S., with a 42% market share compared to Samsung's 26%, it remains the ideal platform for introducing new EHR programs, medical apps, and peripherals to take advantage of more relaxed BYOD policies.

Google Android: The ability to be installed anywhere
Google Android is an open source system, meaning it can be freely modified by anyone and installed anywhere. By comparison, iOS is closed source, which means it can't simply be cracked open, modified, or installed on non-Apple hardware. That's why Android has spread quickly to smart appliances, smart homes, and Internet-connected cars.

Whereas iOS is restricted to apps and peripherals for iPhones and iPads in hospitals, Android could eventually be installed on customized devices such as bedside kiosks, wearable glucose monitors, and personal health monitors. Although Android might be a more unreliable platform to produce wide-reaching apps aimed at the BYOD crowd, it is an ideal operating system for custom-built devices.

Android's pliability has encouraged some hospitals to build their own mobile health care platform from the ground up. In 2010, Palomar Pomerado Health started a project called MIAA (Medical Information Anytime Anywhere), a custom Android app that pulls data directly from the hospital's legacy system to provide physicians with patient data in real time.

Android devices could also gain ground quickly later this year when Google Glass hits the market. Google Glass could seriously undermine the use of iPads and iPhones in hospitals, since it is a hands-free device with a unified hardware and software configuration -- making it an ideal platform for next-gen health care apps.

Microsoft Windows: A hidden threat built on a foundation of legacy systems
With the exciting advancements Apple and Google have made in health care, it's easy to overlook aging tech giant Microsoft.

Since five versions of Microsoft Windows are still installed on over 90% of the world's computers, older adminstrative software in hospitals, such as EHRs (electronic health records), were designed for Windows desktops. In recent years, doctors have complained that these Windows-based EHRs used awkward, time-consuming templates that were poorly designed for certain specialties. These problems fueled the rise of native iPad EHRs, which were tethered to the cloud rather than the older Windows software.

In response, Microsoft started touting Windows 8/8.1 as an ideal platform for EHRs. Microsoft's strategy is based on four ideas:

Microsoft's Windows 8 initiative has already attracted major backers, such as Greenway, Johnson & Johnson, and Mayo Clinic, but it still has yet to prove that a tablet/hybrid-based Windows 8 can match the versatility of Apple and Google Android devices.

The Foolish takeaway
Apple, Google, and Microsoft all have very different approaches to growing their presence in health care IT. Apple is the current favorite in hospitals, but it could soon be taken down a notch by custom built Android devices or Google Glass. Meanwhile, Microsoft might have finally found the ideal market for its Windows 8 devices -- hospitals that already have a foundation built on legacy software for its older operating systems. Investors should keep a close eye on the progress of all three tech giants as demand for better technologies in hospitals rises.