If you thought Apple (NASDAQ:AAPL) was dirt cheap at 13-14 times earnings, would it shock you to learn that Samsung (NASDAQOTH: SSNLF) trades at just 6.42 times earnings?

The two big profit drivers: semiconductors and smartphones
Take a look at the most recent earnings report from Samsung Electronics: 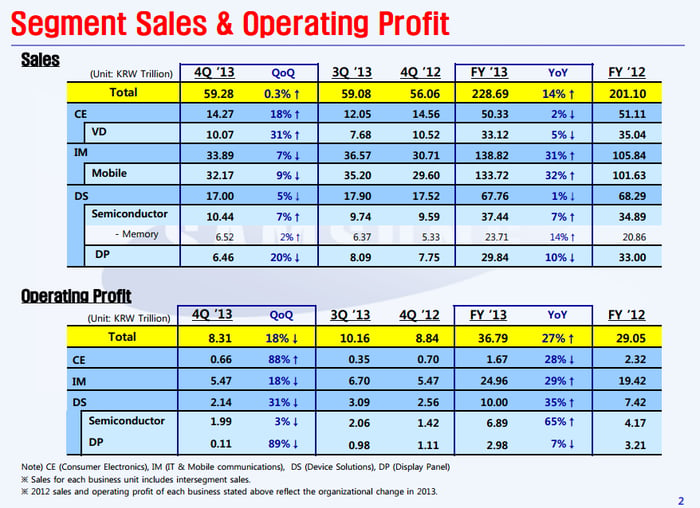 For fiscal 2013, the company did $36.79 trillion won, or about $34 billion, in operating profit -- 67.8% of that profit came from smartphones and tablets, 28% of it came from semiconductors, and the final 4.6% came from consumer electronics. In particular, the large operating profitability in mobile devices has been due almost entirely to the success of its Galaxy line of smartphones and, increasingly, to the Galaxy Tab and Note line of tablets. The semiconductor success appears to be principally from the boom in DRAM and, to a lesser extent, success as a logic foundry, mostly for Apple.

The problem here is that the barrier to entry to develop a solid Android smartphone is quite low. So unless Samsung can find a way to perpetually command 30% market share and a big portion of the profit share, and do so while commanding the roughly 40% gross margin it now does, this profitability is tenuous at best and a significant risk at worst. That argument also somewhat applies to Apple, although Apple's ecosystem and brand do insulate it to some degree from a long-term perspective.

Are investors expecting significant margin compression...or is it something else?
At 6.42 times earnings -- and even cheaper, ex-cash -- are investors expecting some pretty significant margin compression? Almost certainly, although this is nothing new. Investors may also be concerned that a larger iPhone could take away fairly meaningful high-end share, which would hurt the bottom line harder than it would the top line. On top of that, other handset vendors could finally begin to make progress, which could either hurt margins or the top-line, and probably both in the long term.

However, there's probably more to the picture than this. Another possible reason Samsung trades so cheaply is that the shares are so difficult to buy if you're an investor in the U.S. Samsung has no ADR, making it very difficult for investors to actually buy company stock. If the stock were more easily purchased in the U.S., it could be worth significantly more than it is today, even if it commanded a sub-market multiple.

Foolish bottom line
The same worries that plague Apple also plague Samsung. While margin compression is likely to take effect as the smartphone and tablet markets mature, Samsung's problem likely goes beyond these worries and represents the fact that much of the investment capital that would be interested in actually getting a piece of the action is simply unable to do so.