Please ensure Javascript is enabled for purposes of website accessibility
Free Article Join Over 1 Million Premium Members And Get More In-Depth Stock Guidance and Research
By Matthew DiLallo - Mar 24, 2014 at 10:45AM

The founder of SandRidge Energy and Chesapeake Energy is back with a big buy in the Mississippian.

Last week Bloomberg reported that Tom Ward, a founder of both SandRidge Energy (NYSE: SD) and Chesapeake Energy ( CHKA.Q ), had signed a deal to buy all of Royal Dutch Shell's ( RDS.A 0.36% ) ( RDS.B 0.41% ) assets in Kansas. Ward, who formed Tapstone Energy LLC shortly after he was fired from SandRidge Energy, will now be one of the top acreage holders in the Mississippian after picking up Shell's more than 600,000 acres. In so doing, he'll also be directly competing against his former employer in an area of the play where the company's excitement has been increasing of late.

Details on the Miss

Last fall Shell decided to put its 600,000 net acres in Kansas up for sale. This was after the company's first 45 wells just didn't generate an enticing enough economic return for the global energy giant. Overall, Shell has been pulling back on spending as it is exiting several areas that aren't generating enticing returns including its position in the Eagle Ford.

SandRidge Energy, on the other hand, under the direction of Ward, built its entire future on the Mississippian Lime. Ward led in the acquisition of more than 1.8 million acres in Oklahoma and Kansas. While Ward's free spending ways drew much criticism from investors, his bet on the Mississippian is proving to be a very lucrative one for SandRidge Energy. With the company's well costs falling to record lows, the company is generating a very appealing 64% internal rate of return given current well costs and commodity pricing. The following slide details SandRidge's focused potential in the play, which includes even more appealing returns as well costs continue to fall. 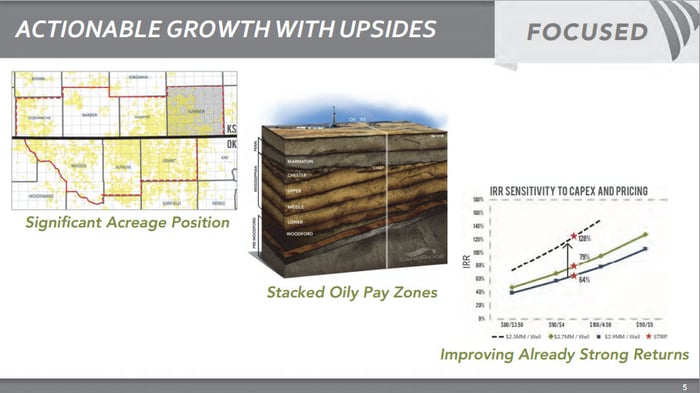 Ward is now going back to the play that he knows best by acquiring Shell's position in Kansas. What's interesting is that for a long time the industry thought that the Kansas portion of the play wouldn't prove to be economical. However, SandRidge Energy recently added Kansas' Sumner County to its core focus area. That focus area now includes four counties in the state and three in neighboring Oklahoma as the slide above details. One of the reasons the company is excited about Sumner County Kansas is that the initial well results there were actually 90% above the company's 2013 type curve, which suggests that there's plenty of oil and gas in the state and the potential for really solid returns.

Another ousted CEO goes back to the same well
Ward's big return to the Mississippian isn't a surprise. His new company really was the most logical buyer of the acreage as SandRidge Energy has more acres than it can handle at the moment. Meanwhile, the rest of the industry is focusing elsewhere as no other company can get its well costs as low as SandRidge's due to the company's substantial infrastructure advantage. That said, Ward knows SandRidge Energy's playbook better than anyone else so if anyone can replicate its success in the play its Ward.

It's also interesting to note how Ward is really following in the footsteps of fellow co-founder of Chesapeake Energy Aubrey McClendon in making his grand return. McClendon, who founded American Energy Partners shortly after leaving Chesapeake Energy, made his first big move after being ousted by acquiring acreage in the Utica Shale. This was the play that really sealed his fate after initial returns didn't live up to lofty industry expectations, which had McClendon calling it the best thing to hit Ohio's economy since the plow.

However, a lot has changed since then as the industry is finding the play to be a great liquids rich gas play. Because of this McClendon has aggressively added acreage in the Ohio shale play as he has raised well over $2 billion in equity to fund this aggressive push in the state since launching his new company. That investment is now estimated to be worth more than $5 billion as the industry has found that the Utica Shale actually can be very lucrative for the right company.

Investor takeaway
Ward is making the same bet on the Mississippian. He knows that the play can be very lucrative if the right company is drilling the play. Given the results that SandRidge Energy is seeing in the play as well as the newly discovered stacked pay potential, Ward's bet to buy Shell's acreage in Kansas could really pay off.

The one stock that could really pay off in 2014