Learn how online holiday accommodation site Airbnb became one of the world's most valuable startups.

Airbnb, an alternative lodging marketplace with more than 500,000 online listings in 192 countries, is in advanced talks to raise capital that would value the company at roughly $10 billion, according to The Wall Street Journal. The fundraising could give Airbnb a valuation bigger than most players in the vacation rental industry, from online competitors such as HomeAway ( AWAY.DL ), to traditional players like Wyndham Worldwide ( WYND 1.66% ), which directly manages more than 7,500 hotels under Wyndham, Ramada, and other brands.

Although Airbnb is quite young, its amazing growth and recent funding suggests that the company could go public as early as this year. By raising additional funding, Airbnb may be preparing to embrace an aggressive global expansion. Combine that with the acquisition of promising start-ups, and the company could become a serious threat to the traditional hotel industry. How did Airbnb become one of the world's most valuable start-ups? 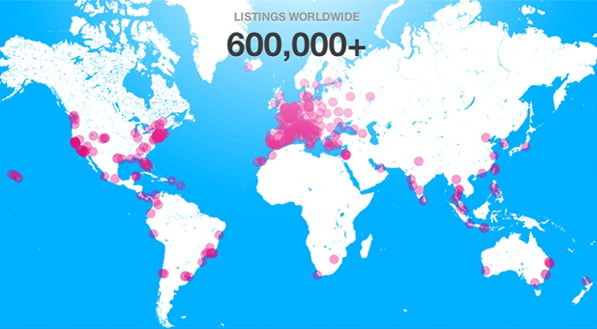 The beginning
Airbnb was founded in 2008 in California. The idea was conceived by roommates Brian Chesky and Joe Gebbia, who turned their living room into a bed and breakfast in order to afford the rent for their loft in San Francisco. Not surprisingly, the original version of the site offered short-term living quarters and homemade breakfast.

To stay afloat, Airbnb's founders sold novelty cereal boxes. The story caught the attention of Paul Graham, a longtime leader of successful start-up incubation program YCombinator. The rigorous and influential program has invested in more than 600 companies, including Dropbox and Heroku.

The success
In order to build an active community marketplace for people to discover unique accommodations around the world, Airbnb curated listings on its homepage and developed a user-friendly mobile website. From the beginning, the company worked to build a brand that focused on the merits of finding creative properties and kind hosts, rather than just providing a directory of properties.

To capture market share from traditional competitors, the company focused on price. Airbnb rentals are usually 30% to 80% lower than available hotels.

In Feb. 2011, the company announced its 1 millionth booking. By late 2013, the company reported it had more than 6 million new guests in 2013. In the meantime, the company acquired several competitors, from German competitor Accoleo, to London-based rival CrashPadder.

From now on
The company has more than 600,000 listings in 193 countries. However, there's plenty of room for growth. Asia could be a great growth driver in the next few years. The company's goal is to add 2 million properties on the continent. Airbnb also wants to diversify its business model by adding various hospitality services. It already began testing a cleaning service for hosts in certain areas in San Francisco and New York.

The business model
Unlike traditional competitors like Wyndham Worldwide -- one of the most diverse hotel companies with more than 7,000 hotels worldwide -- Airbnb does not own any property rented on its service. Its cost structure is lighter than Wyndham, which has to employ many people to maintain its operations, from bellhops to managers. And unlike HomeAway, which earns most of its revenue from fees that owners pay to list their rentals, Airbnb offers free listings. Airbnb makes money by charging hosts a 3% fee when they receive a successful booking and charging travelers an additional  6-12% on top of the rental fee.

Competitors
HomeAway could become a strong competitor. At the moment, HomeAway mainly focuses on renting entire homes or condos. Most of its listings are in vacation destinations, such as Hawaii. Nearly 40% of its properties are listed by management companies.

So far, Airbnb has focused on properties listed by homeowners. A great proportion of Airbnb's listings are in urban markets. That being said, Airbnb and HomeAway could be on a collision course. An increasing proportion of Airbnb's listings are for entire properties. Meanwhile, HomeAway has started to gradually experiment with free listings. The site recently added some 71,000 new free listings.

Final Foolish takeaway
As one of the most important online marketplaces for lodging, Airbnb could be valued at roughly $10 billion. By building a trusted community of hosts and customers, and providing users with a chance to find creative properties, Airbnb has seen amazing growth in the past six years. However, as the company continues to expand its business globally, several challenges could emerge, from new competitors to scrutiny from regulators who worry about safety and tax collections. Despite the various challenges ahead, the company should continue experiencing fast growth as it increases its presence in new markets such as Asia.

Why Shares of HomeAway Inc. Jumped on Wednesday