Retailers are indeed having a tough time trying to overcome various obstacles keeping customers away from its stores. In addition to lower consumer spending, severe weather conditions have been a cause of concern. Also, the growing importance of online sales has marred foot traffic in malls and stand-alone stores. People now find it easier to buy items online and get them delivered to their doorstep rather than take the pains of going out.

However, department store retailer Macy's (NYSE:M) managed to overcome all of these hurdles and shine brightly when it posted its fourth-quarter results. Its earnings beat investors' expectations, sending its stock price higher.

The details of the quarter
Weak sales in January and one less week this year resulted in a revenue drop of 1.6% compared to last year, clocking in at $9.2 billion. However, the retailer managed to post same-store sales growth of 1.4% since sales during the holiday season.

Macy's promoted its products heavily during the holiday seasons and provided heavy discounts in order to attract more customers. Despite providing steep discounts the retailer managed to keep its gross margin strong. Its margin remained at 40.6% -- par with the year-ago quarter.

Adjusted earnings for the quarter stood at $2.31 per share, much higher than analysts' estimates of $2.17 per share and last year's EPS of $2.05. As indicated by fellow Fool Adam Levine-Weinberg, even if we get rid of the gain on sale of assets, which boosted the bottom line by $0.10 per share, earnings stood at $2.21 per share. Hence, the company did a commendable job of managing its expenses, resulting in earnings growth.

Snapshot of the past
If we look at Macy's stock price performance as against its peers, Kohl's (NYSE:KSS) and J.C. Penney (OTC:JCPN.Q), Macy's comes out a leader, as reflected in the chart below: 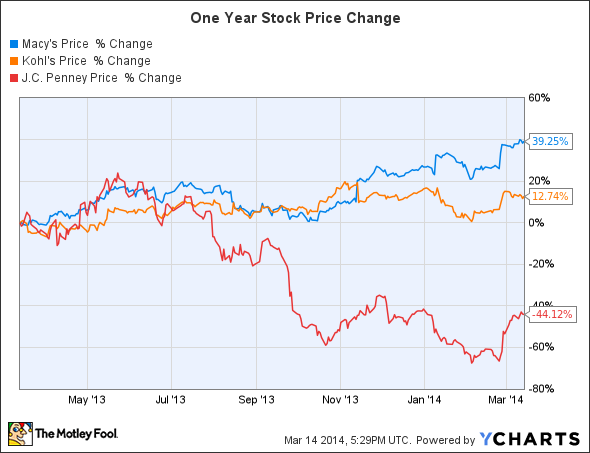 Macy's has provided the highest return of 39.3% in the last one year, whereas Kohl's is at 12.8%. On the other hand, J.C. Penney's stock price has decreased 44% during the same period.

Macy's has been performing well, with a focus on driving its numbers higher, especially e-commerce numbers. The company has been making efforts to strengthen and expand its online operations. On the other hand, J.C. Penney's e-commerce efforts were not up to the mark, resulting in an online sales decline of 33% in 2012 compared to $1.52 billion in 2011. In fact, revenue from online operations now accounts for 8% of total revenue for J.C. Penney as against the revenue composition of 15% a decade ago.

Nonetheless, the company is trying to revive its e-commerce business by bringing in more merchandise that was removed from online stores. Also, Penney plans to rebuild its customer loyalty program, which should be beneficial. These efforts have started paying off, as evident from the 26% increase in e-commerce sales during Penney's holiday quarter. However, these efforts, along with higher discounts and promotions, hurt the retailer's margins as well as its bottom line in the recently ended quarter.

Kohl's is also having a tough time with a decline in same store sales from the last few quarters. The metric declined 2% in the fourth quarter and 1.6% in the third quarter. However, the company has been taking initiatives to grow its sales, both online and in-store. It plans to follow Macy's Omni-channel strategy, wherein it will be capable of fulfilling online orders through its stores. All of its stores will have all of the merchandise, so online orders can be picked up by customers. Also, it plans to revamp its mobile app after it's done with the IT upgrades on its website.

Road ahead
Although both peers are trying to replicate Macy's strategy, they are unable to outperform Macy's. While it has been strengthening its e-commerce business, it has also remodeled its stores in order to make them more attractive. The benefits of these efforts are yet to be seen.

Moreover, the company has been increasingly promoting its products, which have lured customers. Macy's also witnessed sales growth in February, especially on Valentine's Day, which shows customers are getting back to stores after severe weather conditions.

In fact, the company expects demand to pick up as the weather returns to normal and spring sets in. Macy's spring collection, which will be launched in the months to come, will give customers more reason to visit its stores. Hence, winter woes were short-lived and the retailer will soon return to normal condition in the coming months. Also, the company stuck to its comp sales growth forecast of 2.5% to 3% despite undergoing a difficult winter  season.

Bottom line
In addition to the above mentioned factors, the retailer's restructuring plan should save overhead costs of around $100 million. Therefore, its bottom line should benefit further. The new spring collection, increased marketing and a growing e-commerce business are reasons enough to invest in this company. Macy's is definitely worth a look.