But few of us can invest in every single dividend-paying stock on the market, and even if we could, we're likely to find better gains by being selective. Today, the world's two largest hard disk drive manufacturers (forming an effective duopoly), will square off in a head-to-head battle to determine which offers a better dividend for your portfolio.

Tale of the tape
Founded in 1979, Seagate Technology PLC (NASDAQ:STX), originally known as Shugart Technology, is the world's largest maker of hard disk drives (HDDs) and data storage solutions. Seagate developed the first 5.25-inch HDD in 1980 and has remained a dominant supplier to the PC industry ever since. Headquartered in Cupertino, Calif., Seagate currently employs more than 50,000 people working round the clock to produce HDDs for PC manufacturers and independent distributors around the world. The company generates 70% of its revenues from PC makers, and around three-quarters of its sales are made outside the U.S. due to the high concentration of PC manufacturing capacity in Southeast Asia.

Established in 1970, Western Digital Corp. (NASDAQ:WDC), formerly known as General Digital, is the second-largest hard disk drive manufacturer in the world. The company nearly vanished in the 1970s before striking gold with its early microchip products, a success that allowed it to expand into data storage by providing controller components for disk drives. Western Digital has aggressively expanded its R&D and manufacturing capabilities, products portfolio, and geographical footprints with the acquisition of Hitachi Global Storage Technologies, and today, the company generates roughly 60% of its revenue from PC manufacturers and more than half of its sales from the Asia-Pacific region.

Round 1: Endurance (dividend-paying streak)
According to Dividata, Seagate began paying quarterly shareholder distributions in 2003, but it ceased payments from mid-2009 to early 2011, which gives it a mere three-year dividend-paying streak. That's still an easy win for Seagate over Western Digital, which only began paying quarterly dividends in mid-2012.

Round 2: Stability (dividend-raising streak)
Seagate's halted dividend payments resumed with a vengeance in 2011, and the company has boosted payouts each year, which is still enough to snatch away the stability crown from Western Digital, which first raised payouts over its initial rate late last year.

Round 3: Power (dividend yield)
Some dividends are enticing, but others are merely tokens that barely affect an investor's decision. Have our two companies sustained strong yields over time? Let's take a look: 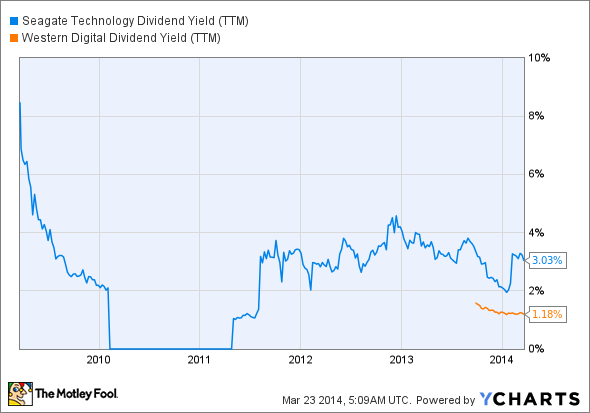 Round 4: Strength (recent dividend growth)
A stock's yield can stay high without much effort if its share price doesn't budge, so let's take a look at the growth in payouts over the past five years. 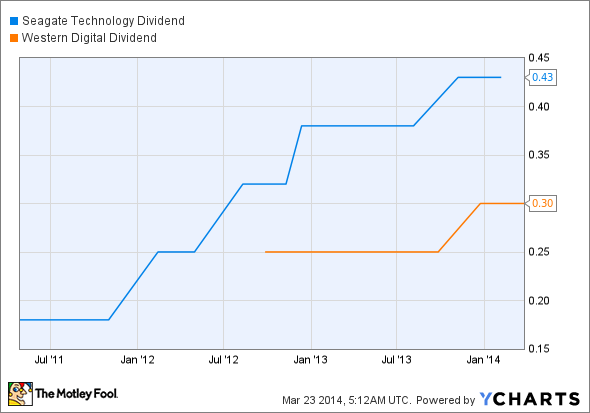 Round 5: Flexibility (free cash flow payout ratio)
A company that pays out too much of its free cash flow in dividends could be at risk of a cutback, particularly if business weakens. We want to see sustainable payouts, so lower is better: 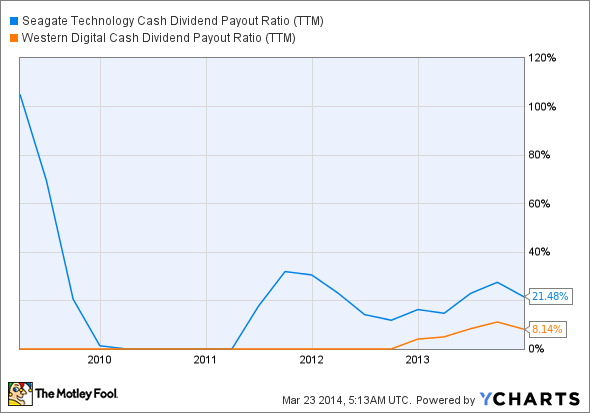 Bonus round: Opportunities and threats
Seagate may have won the best-of-five on the basis of its history, but investors should never base their decisions on past performance alone. Tomorrow might bring a far different business environment, so it's important to also examine each company's potential, whether it happens to be nearly boundless or constrained too tightly for growth.

One dividend to rule them all
In this writer's humble opinion, it seems that Seagate has a better shot at long-term outperformance, thanks to a long-term product strategy that includes cloud and big-data uses as well as the explosively growing 3D NAND flash memory market. However, Western Digital's ability to grow its market share is a worrisome indicator for Seagate shareholders, who should keep a close eye on Western Digital's product portfolio and sales strategies. The beleaguered PC market will continue to trouble both manufacturers in the near future, so the ultimate victor is bound to be the one that best transitions toward a post-PC world. You might disagree, and if so, you're encouraged to share your viewpoint in the comments below. No dividend is completely perfect, but some are bound to produce better results than others. Keep your eyes open -- you never know where you might find the next great dividend stock!