Wal-Mart just announced a new initiative, and it’s not likely to be good news for GameStop.

Do you, or your kids or grandkids, have old video games lying around? If so, then you might want to plan a trip to Wal-Mart Stores ( WMT 1.51% ).

Beginning next week, Wal-Mart is implementing a program where consumers can bring in used video games and earn store credit. That store credit can then be used for anything in the store or at Sam's Club stores.

The game plan
Wal-Mart is attempting to attract more consumers to its stores. You might remember that the retailer tried a used-game trade-in program before, which failed. Therefore, your first inclination might be that Wal-Mart will fail again. While this is a realistic possibility, Wal-Mart doesn't seem like the type of company that would make a second attempt at an initiative unless it was highly confident it would work. The most likely scenario is that Wal-Mart learned from its previous experience and that it will now offer a simpler service that will succeed.

This initiative should also help attract more young consumers, especially millennials. This, in turn, has the potential to help the company's reputation with this age demographic (18-32 year-olds).

Not so fierce competition
GameStop ( GME -5.05% ) offers a similar service. People can trade in used games for store credit. There's just one simple difference between Wal-Mart and GameStop when it comes to potential for this service. Wal-Mart stores can be found in almost every town -- or at least almost every neighboring town -- across the United States. GameStop can't compete with this kind of convenience.

The real key for Wal-Mart will be marketing. Obviously, it's off to a good start already. You're reading about it, right? Additionally, Wal-Mart has massive cash flow advantages over GameStop and electronics retailer Best Buy ( BBY 1.88% ), the latter of which also offers used-game trade-ins for store credit.

Best Buy is having a problem similar to Wal-Mart's, which is getting consumers to its stores. In Best Buy's fourth quarter report, Best Buy cited declining retail traffic as a headwind, partially related to weaker-than-expected consumer electronics market. Best Buy must offer promotions to attract more consumers. This is likely to lead to margin contraction and a weaker performance on the bottom line. However, Best Buy has managed costs well.

Overall, Best Buy still faces many headwinds, but it seems to be maximizing its potential in the current consumer environment. Regardless, Best Buy isn't likely to see significant traffic increases. Therefore, it's not likely to be a threat to Wal-Mart in the used game space.

Of course, Wal-Mart is a much different type of retailer. But the bottom line is that it has a greater ability to spread the word about this offering, allowing it significant opportunities to steal market share from both GameStop and Best Buy.

This could especially be bad news for GameStop.

Stop gaming
In fiscal 2013, 27% of GameStop's global sales and 44% of its global profits stemmed from used game sales. If Wal-Mart eats into those numbers, it's going to be bad news for a company already on the fringe.

Consider the chart below, which demonstrates that GameStop's selling, general, and administrative expenses have been growing faster than its revenue over the past five years: 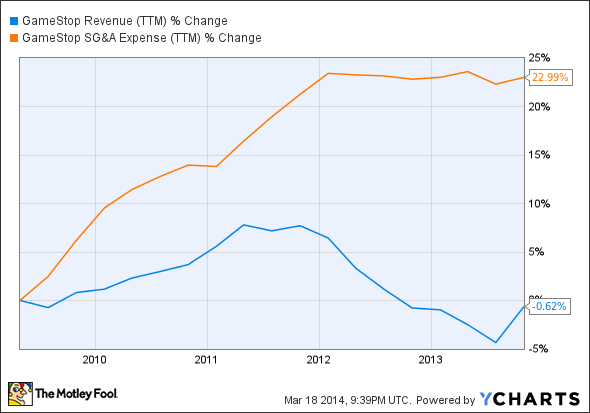 Fortunately, GameStop has improved in this area over the past year, with revenue growing at a 1.9% clip; SG&A expenses have declined 0.5%. However, whether or not this trend is sustainable is very questionable. And Wal-Mart's used game trade-in invasion won't help.

The one positive for GameStop is that it's fiscally sound. In addition to offering positive cash flow, the company sports $649.1 million in cash and short-term equivalents versus no long-term debt. Therefore, it will have plenty of ammo to put to work for new initiatives, and its 3.4% dividend yield should be safe for the near term.

As far as Wal-Mart is concerned, it almost always finds a way to grow its top line faster than its SG&A expenses: 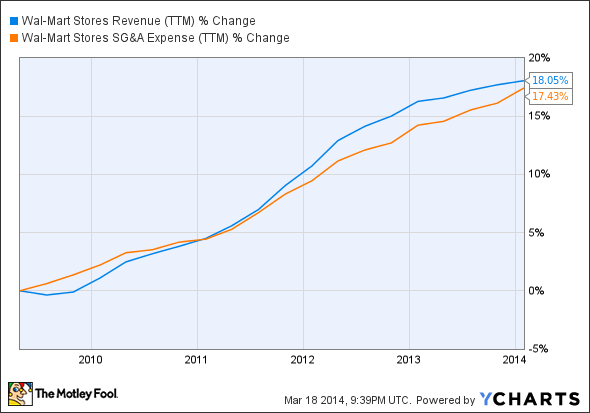 Wal-Mart and Best Buy currently have the same dividend yield of 2.6%.

The Foolish bottom line
While we don't know whether Wal-Mart's new initiative will help drive younger consumers to its stores, it doesn't have much to lose. GameStop, on the other hand, is more likely to suffer than gain from this development. Fortunately, GameStop generates positive cash flow and possesses a healthy balance sheet, which at least gives it potential. That said, GameStop is going to have to think of something to drive its top line instead of just relying on new console and game releases. Please do your own research prior to making any investment decisions.