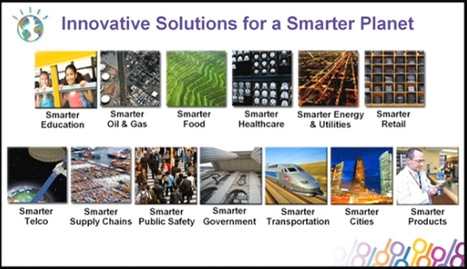 The April 15 deadline for personal tax returns is just a couple of weeks away, and small business owners should have filed corporate returns by last week. You can check the status of your expected IRS refund starting 24 hours after e-filing your return (or four weeks after if you prefer paper filings).

But what will you do with the money when that juicy IRS refund drops in your mailbox? Investing it in a solid stock with long-term value written all over it would be one good play -- and it can even get you started on next year's tax deductions.

The Dow Jones Industrial Average (DJINDICES:^DJI) is a great place to start looking for stocks with long-term potential, and IBM (NYSE:IBM) is selling at a historical discount right now. So should you sink your IRS refund into IBM shares today?

Big Blue's stock is available for just 12.5 times trailing earnings. That's one of the six lowest P/E ratios among the 30 Dow components, and you don't see discounts like these on IBM shares very often: 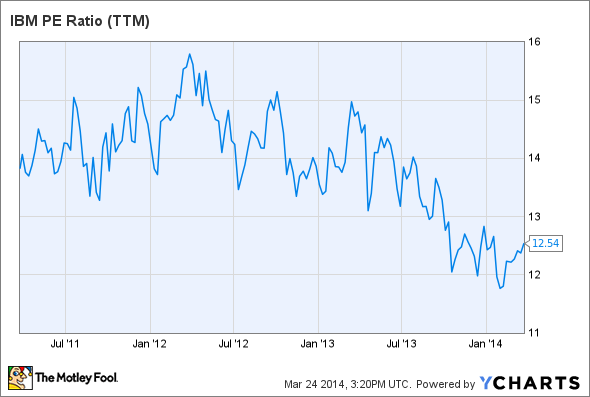 IBM is value-priced thanks to a soft 2013, in which the company missed Wall Street's earnings targets once and kept a tight lid on guidance throughout the year.

The company is working up a brand new strategy, focused on cloud-based software and services in a big way. The company last year focused on rebuilding under freshly appointed CEO Ginni Rometty, and strategy shifts often hurt. In the short term, that is.

The long-term story behind IBM remains strong. Big Blue is pumping billions of dollars into next-generation research, spearheaded by its Internet of Things and Smarter Planet projects.

Staying relevant in a rapidly changing market requires some flexibility, and nobody knows that better than century-old behemoths like IBM. If the shift to cloud computing looks scary, remember that IBM has survived two world wars, countless recessions, and more strategy adjustments than I can count.

The Computing-Tabulating-Recording Co., as it was known upon being created by the 1911 merger of three companies stared down World War I 100 years ago while selling cheese slicers and mechanical cash registers. The first mainframe computer was still 30 years away.

IBM is a survivor and a proven long-term winner. The stock has absolutely crushed the Dow over the last three decades. 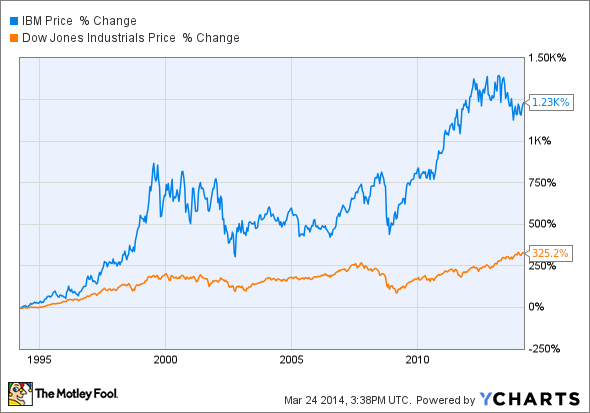 But don't just take my word for it. Master investor Warren Buffett isn't known for gambling on hot tech trends, but his Berkshire Hathaway (NYSE:BRK.A) conglomerate owns a huge 6.9% stake in IBM. Berkshire is IBM's largest shareholder, and increased its holdings by 6% over the last six months.

Like a true value investor, Buffett doesn't mind IBM shares trading at a discount right now. Short-term discounts are nothing but a buying window for Buffett, because he keeps a long-term view of every company he owns.

"I feel fine with her but her record will be judged five years from now," Buffett said of Rometty in a recent CNBC interview. "There's a lot going on in that business."

All things considered, IBM looks like a strong destination for an IRS refund right now.