Shares of Symantec (NASDAQ:NLOK) fell as much as 14% on March 21, after the computer security company announced it had fired its chief executive officer, president, and former board member Steve Bennett, after less than 18 months on the job.

The termination raises concerns about Symantec's turnaround efforts. Since it was created in 1982, Symantec has grown into a global leader in security, backup, and availability solutions, with more than 20,000 employees in 48 countries. Symantec's scale of operations is much bigger than that of rivals Kaspersky Labs and AVG Technologies.

However, in the past few quarters, the company has struggled with poor sales due to the decline of the PC industry. Symantec has also had some difficulty shifting its consumer security business from a one-time license, to a subscription-based model. So what's in store for Symantec after Steve Bennett's termination? 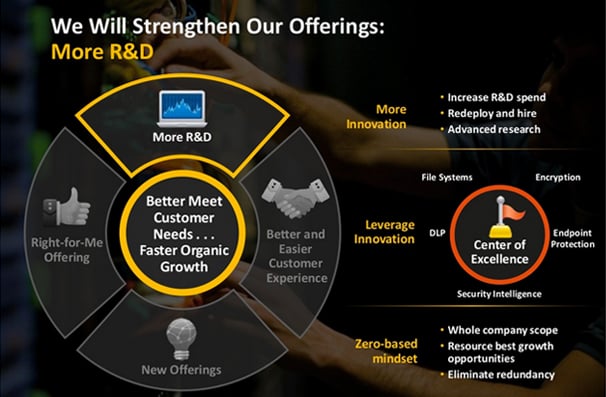 The termination effect
Altogether, seven firms have downgraded Symantec after the company decided to fire Steve Bennett, causing a major sell-off. Worries about the future of Symantec are not completely unfounded.

Finding a willing and capable replacement is likely to take some time. In the meantime, the company may face "another multi-year period of upheaval, management turnover and strategic uncertainty," according to MKM Partners' Israel Hernandez.

The turnaround
Steve Bennett had launched a strategic review of Symantec's business after replacing ex-CEO Enrique Salem, who was fired after three years on the job. When Bennett took the position, Symantec's marketing and sales costs represented 41% of revenue, but the company's top line was barely increasing at a 1% organic growth rate.

Bennett soon realized there were several issues impeding Symantec. For example, the company's product line was regarded as being too complicated, as it required technical expertise to understand the difference between products. Management decided to change this by making its salesforce focus on general keywords, such as information security or information management. The company also developed new partnerships to improve sales. In this way, Bennett was on target with Symantec's restructuring and refocusing.

Several challenges ahead
It's unclear why Bennett was terminated. Perhaps the company's turnaround plans were taking longer than expected. Note that in the most recent quarter, the company reported better than expected earnings. However, its revenue was down 4.8% compared to the same quarter last year.

When it comes to growing its sales, Symantec faces several challenges. According to Gartner, the market for security software is expected to grow 30% to $87 billion by 2016. However, most of this growth will likely take place in network security and mobile security segments. Symantec, which is particularly strong in the PC security segment, has struggled to gain share in these fast-growing markets.

From an earnings perspective, the company could also improve profitability by gradually shifting its business from a license-based model to a subscription-based system that provides recurrent revenue. But this has yet to work.

The future of security lies in networks and mobile
Palo Alto Networks (NYSE:PANW) -- which specializes in developing software that analyzes business networks in order to identify potential security breaks -- recently announced that its revenue for the most recent quarter grew 46% year over year, achieving a record $141.1 million figure. To benefit from the increasing demand for network firewalls in Asia, the company recently opened a new cyber-security lab in Singapore.

Despite the various challenges ahead, and the recent termination of Steve Bennett, it's worth recognizing that Symantec has plenty of assets left. These should help it to improve its top line by focusing on fast-growing security segments. As the protector of more than one billion systems, the company has deep expertise in the information security field, owns strong brands -- such as Norton Antivirus -- and is committed to increased spending in research and development.

Final Foolish takeaway
Symantec's surprising decision to fire Steve Bennett has raised concerns about the company's turnaround efforts. A leader in PC security, it has recently struggled with poor sales performance, as competitors such as Palo Alto Networks and Kaspersky Labs gain share in the promising network and mobile security segments.

However, Symantec has enough assets, technology, and expertise to improve its sales performance by focusing on the right segments. From this perspective, a turnaround is possible in the long run. In the short run, finding a replacement capable of executing the turnaround plan does seem like a difficult task.