Gosh darn it! I missed it!

Over the past 30 years, ExxonMobil (NYSE:XOM) has been a remarkably strong investment. Since the beginning of 1984, the company has generated a 14% compounded annual return for investors. A $10,000 investment in ExxonMobil made at that time would be worth almost $510,000 today!

However, we're unlikely to see that feat repeated again because ExxonMobil is in trouble. Thanks to the unfortunate math of the energy business, the company must run faster and faster just to stand in place. Today, ExxonMobil produces 4.3 million barrels per day. Yet the company must spend more than $40 billion per year just to stave off production declines, let alone grow output.

No, savvy investors must therefore look for the next ExxonMobil -- a company that has the potential to deliver double-digit growth for decades and one day join the ranks of big oil. And Bakken giant Continental Resources (NYSE:CLR) may just be what energy investors are looking for.
Is this company the next ExxonMobil?
Continental Resources is sitting on one of the greatest shale plays in American history: the North Dakota Bakken.

Thanks to new technologies like hydraulic fracturing and horizontal drilling, billions of barrels of previously unexploitable oil have been unlocked. And this has allowed Continental to grow its production at a 38% annual clip over the past four years. The company's EBITDAX -- earnings before interest, taxes, depreciation, amortization, and exploration expenses -- has grown fivefold over that same time period. 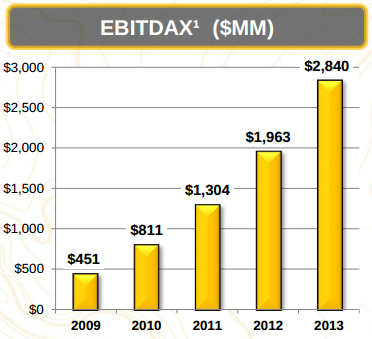 But the Bakken might just be the beginning. The company is exploring several new plays that could deliver returns far in excess of even the mighty Bakken. And this could allow Continental to sustain its production growth for far longer than investors currently anticipate.

Based on the latest findings from United States Geological Survey, the Three Forks formation, which sits directly underneath the Bakken, could be America's next big shale play. According to the USGS, the field could contain some 3.7 billion barrels of undiscovered, technically recoverable crude oil -- slightly larger than the Bakken shale that lies above it.

Continental is even more optimistic. Last September company President and Chief Operating Officer Rick Bott estimated that the lower benches of the Three Forks could contain between 8 billion and 21 billion recoverable barrels of oil.

There is also great optimism surrounding the company's position in a new shale field called the Southern Central Oklahoma Oil Province, or SCOOP. The play, an area more than 3,000 square miles in size, straddles the Anadarko Basin and the Woodford Shale. At its deepest the pay-zone is 400 feet deep, twice as thick as the Bakken.

Continental CEO Harold Hamm is bullish. He estimates that there may be as much as 70 billion barrels of crude oil sitting in SCOOP; although the number of those barrels that will be economically recoverable is yet to be determined. The company has committed a $900 million investment to the field -- almost a quarter of its 2014 capital budget.

Other industry names also see much potential in SCOOP. To date Newfield Exploration (NYSE:NFX) has drilled seven wells in the play with initial production rates averaging 900 barrels of oil equivalent per day. These results definitely suggest that the play could be economical. However, Newfield management has warned that more exploration work is needed.

Continental is busy derisking its Lower Three Forks and SCOOP acreage. As those reserves get booked in upcoming quarters, it could be a hidden catalyst for the stock.

Foolish bottom line
Could Continental Resources one day join the ranks of big oil? That idea is not as absurd as it sounds. Thanks to a litany of new shale plays, the company is on track to triple production and proved reserves over the next five years. At the very least, energy investors hunting for big returns over the next three decades should be looking at fracking upstarts like Continental rather than industry behemoths like ExxonMobil.