Apple (NASDAQ:AAPL) could soon introduce iTunes for Google (NASDAQ:GOOGL) Android and a stand-alone iTunes Radio app for iOS 8, according to a recent report in Billboard.

These new strategies could be aimed at reversing an alarming 13% decline in U.S. digital album sales, reported by Nielsen SoundScan for the week ending on March 9. Digital track sales, traditionally a strong point for iTunes, also fell 11%. Apple's iTunes Store currently accounts for over 40% of U.S. music sales.

These declines were likely caused by two main factors -- the global rise of Android devices and the soaring popularity of streaming services such as Pandora Media (NYSE:P) and Spotify. Android's global market share in smartphones rose from 51.5% in 2012 to 55.7% in 2013, while its share of tablets climbed from 45.8% to 61.9%, according to year-end numbers from Kantar and Gartner.

Meanwhile, a recent report from the Recording Industry Association of America (RIAA) revealed that subscription, advertising, and licensing revenues from streaming services such as Spotify, Pandora, and Google's Youtube rose 39% year-over-year to $1.4 billion in 2013. Another report from the International Federation of the Phonographic Industry (IFPI) revealed that streaming music revenue rose 51% worldwide while album and track downloads fell 2.1%.

Why iTunes for Android is too little, too late
Releasing iTunes for Android might seem like a good way to attract extra users, but it will be competing squarely against Google Play's sprawling ecosystem of music, TV shows, movies, games, and more. Using Google Play is second nature to most Android users, making an Android iTunes app fairly redundant in a Google-dominated ecosystem.

Android users also have a wide selection of other digital music stores to choose from, such as Amazon's (NASDAQ:AMZN) MP3 Store, 7Digital, or built-in storefronts from handset manufacturers Samsung (NASDAQOTH: SSNLF) and Sony (NYSE: SNE). It's also fairly easy to synchronize iTunes music libraries to Android devices via third-party apps.

Therefore, customers who favor iTunes over other digital music storefronts have probably already installed iTunes on their PCs. An iTunes Android app would certainly streamline and simplify the synchronization process, but the actual growth in new customers could be minimal. 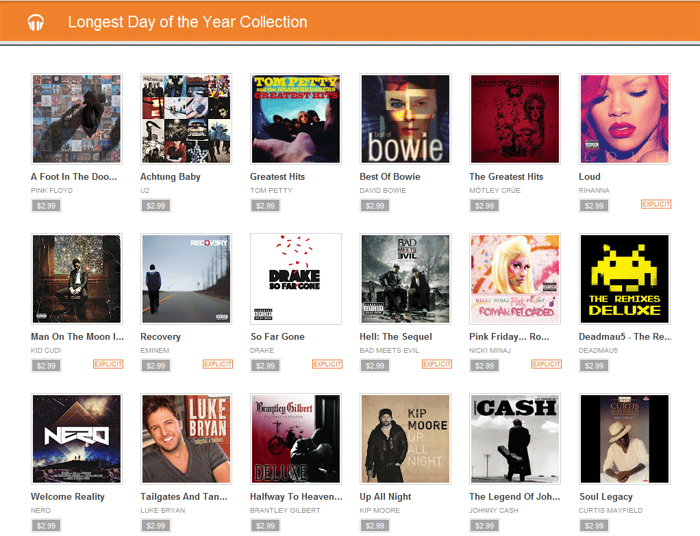 The only real way for Apple to gain new customers in the fragmented market of Android music stores is to offer better prices than its competitors. Unfortunately, there's already very little wiggle room in pricing -- pressure from the RIAA already forced prices on popular songs to be raised from $0.99 to $1.29 five years ago.

Those big bad royalties...
In response to the growing popularity of streaming services, Apple rolled out iTunes Radio in the United States and Canada last September. By doing so, however, it plunged head-first into a complicated, fragmented market that has been consistenly squeezed for royalties by the recording industry and its musicians.

Pandora, the largest Internet radio company in the U.S. with an 8.9% market share, recently won a crucial battle against the American Society of Composers, Authors, and Publishers (ASCAP) for lower royalty rates. ASCAP wanted Pandora to pay out 3% of its total revenue, while Pandora argued that it was entitled to the 1.7% rate paid by radio broadcasters. The court decided that Pandora should continue paying its current 1.85% royalty rate to the ASCAP.

Yet the ASCAP settlement is only the tip of the iceberg -- Pandora actually pays over half of its annual revenue to SoundExchange, a non-profit organization designated by the Copyright Royalty Board (CRB) to collect and distribute royalties. Combine that whopping expense with its growing user base, rising listening hours, and intensifying competition, and Pandora is faced with a huge dilemma -- its margins are crumbling and its ability to effectively raise prices is crippled.

Pandora's total content acquisition costs soared 57% year-over-year to $259 million in fiscal 2013, while its net loss more than doubled to $38.1 million. Pandora stated in its annual report that if it does not reach a more favorable royalty agreement with SoundExchange by 2015, "operating costs may significantly increase" and "inhibit the implementation" of its business plan.

Will Apple's iTunes Radio strategy work?
Apple initially tried to throw its weight around by pressuring record companies for lower royalty rates for iTunes Radio than Pandora, but the recording industry refused to budge. Apple eventually agreed to pay a royalty rate of 0.13 cents per song play, slightly higher than Pandora's current rate of 0.12 cents per play. Apple will also pay record companies 15% of its advertising revenue during the first year of its contract, and raise that figure to 19% in the second year.

Apple is willing to make those sacrifices, since iTunes Radio encourages users to purchase the streaming track from the iTunes store, which could in turn boost sales of its digital tracks and albums. However, that simple view of things doesn't account for the fact that 40% of Pandora users listen on Apple devices -- a figure that has risen since the launch of iTunes Radio.

Apple's key advantage is that the ad-free version of iTunes Radio costs $25 per year, compared to Pandora's new price of $60 per year and Google Play Music's monthly fee of $9.99. Apple can also afford to take losses on its streaming radio business to boost sales of digital downloads, while Pandora can't.

Therefore, adding a stand-alone iTunes Radio app in iOS 8 to replace the current one tucked away in its own Music application could elevate its visibility against Pandora or Spotify, but it won't likely be a game-changing move that convinces users to ditch their favorite streaming service. Apple is widely expected to offer the public a preview of iOS 8 at 2014 WWDC in June.

The market for streaming radio is so fragmented and heavily weighed down by royalty rates that it makes profitability tough for even tech titans like Apple and Google. The wider release of both products could slightly boost iTunes downloads, but it's tough to see the strategy result in a long-term reversal of the industry's recent double-digit declines.