While the traditional ownership model still dominates how the music business generates revenue, streaming services are rapidly growing while purchases of physical CDs and even digital downloads are shrinking globally.

The slow death of the CD is not a surprise, but the drop in digital downloads shows that the idea of needing to own music is slowly changing. This might be good news for the streaming/subscription services, but it remains to be seen whether the industry can replace the revenue it's losing in physical/digital sales with streaming/subscription dollars. 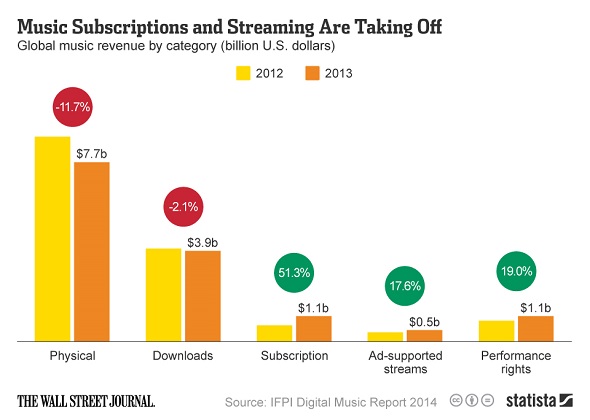 Are people less likely to steal now?
The IFPI -- the non-profit International Federation of the Phonographic Industry -- describes itself as the voice of the recording industry worldwide, representing the interests of 1,300 record companies from around the globe. The group does an annual survey of the music business and it took an encouraging tact on what the increase in sales for subscription-based services means.

"The subscription model is leading to more payment for music by consumers, many of whom appear to be shifting from pirate services to a licensed music environment that pays artists and rights holders. The number of paying subscribers to subscription services rose to 28 million in 2013, up 40% on 2012 and up from only 8 million in 2010," the group wrote in its 2013 survey.

The group also reported that revenues from from advertising-supported streaming services including Google's (NASDAQ:GOOGL) YouTube and the joint-owned Vevo rose by 17.6% in 2013.

The U.S. music market is changing, too
One of the positives for the music industry is that according to the Recording Industry Association of America, total revenue in the U.S. held stable at $7 billion, the Wall Street Journal reported.

Those numbers are encouraging because they suggest that total music revenue in the United States has hit its bottom. While dollars spent may shift from physical CDs and digital downloads, they won't go away entirely.

CDs still generate the most revenue
While sales numbers have fallen consistently, physical CDs still represent a huge chunk of sales across the world, according to the IFPI report.

Despite the overall transition to digital, physical music sales still account for a major proportion of industry revenues in many  major markets. Gifting and deluxe box sets remain popular while vinyl continues to grow as a niche product. Physical formats account for more than half (51.4%) of all global revenues,  compared to 56.1% in 2012. Although global physical sales value declined by 11.7% in 2013, major markets including Germany, Italy, the U.K., and the U.S. saw a slow-down in the rate of physical decline.

Young people like streaming music (but will they pay for it?)
In the United States at least, using streaming services is a young person's game, as you can see on the chart below. 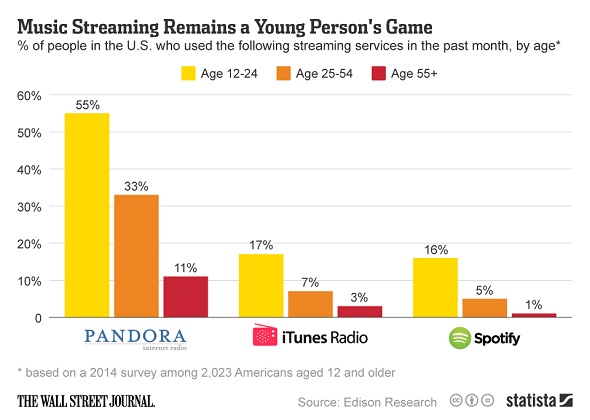 These younger users who have embraced Pandora, Apple's (NASDAQ:AAPL) iTunes Radio, and Spotify are growing up thinking that music is not something you own. It's unlikely that these younger folks will ever become major purchasers of music, either through downloads or physical copies. As the populace ages, the people who buy CDs and pay for downloads will either die off or convert to streaming/subscription customers.

The future health of the music industry relies on whether the streaming services and subscriptions can make up the huge revenues that are currently derived from physical sales and downloads. As you can see in the chart at the top of the page, those two segments still account for $11.6 billion in global revenue. Meanwhile, ads on streaming services and subscriptions only account for $1.6 billion.

That is a huge amount of revenue to make up. While the growth numbers for streaming services are impressive, it's hard to see how they will climb a mountain that large.

Still, it's an evolving model with new players still entering. While things look dire for the music industry, it will take years for the physical sales and downloads to completely atrophy. It's possible that if the streaming services can maintain their growth levels (and figure out alternative ways to monetize), there is hope that 10 years from now there will still be a music industry.