While many (including yours truly) were blindsided by the sheer technical competence of the Apple (NASDAQ:AAPL) A7 -- and in particular the 64-bit Apple-designed CPU core called "Cyclone" -- anybody following this space won't make that mistake again. So, what's Apple got up its sleeve for the next iPhone?

Heterogeneous computing
Take a look at the following picture of the A7 chip: 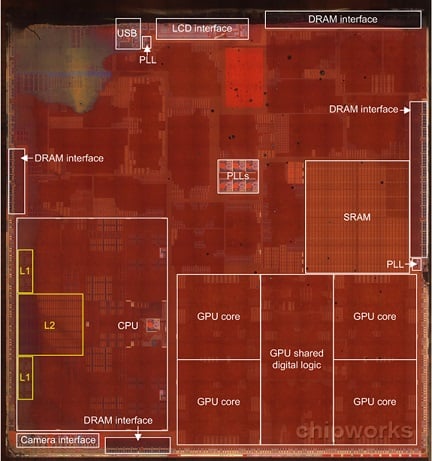 One thing that you should immediately notice is just how much silicon real estate Apple is willing to devote to both the central processing unit (CPU) and the graphics processing unit (GPU). Apple is very serious about packing as much computing horsepower into its chips as possible. So, what's the best way to do that?

Well, of course Apple is going to continue devoting significant area to its custom-designed CPU cores, but if you'll notice, Apple also dedicates a hefty amount of space to the GPU. Now, you might think the GPU is just there to make games run faster and prettier at increasingly more demanding display resolutions -- and this is indeed a major driver -- but it is very likely that Apple's plans are far more ambitious: It's likely to be one of the leaders in GPU computing.

Why is GPU computing so important?
Think of a CPU core as being very "brainy." While it's not likely to win any contests when it comes to pure mathematical operations against a GPU that is made up of a bunch of "wimpy" cores that in aggregate can out-do the CPU core, the CPU core is much better at handling more complex code with a less straightforward execution path. Most software still depends heavily on high per-core performance, but the amount of software for which GPUs are better suited continues to grow outside of graphics. 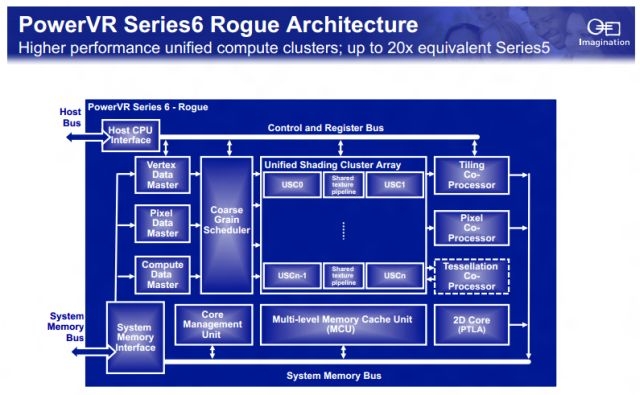 So, for example, something like speech recognition or augmented reality, having the ability to offload tasks that are well-suited for a GPU to the GPU without making the programmer's life too difficult would be a boon, particularly in thermally constrained environments where efficiency is key (the less work you do, the more power you save). In order to keep people upgrading to next generation iPhones/iPads, Apple will need to continue to push the envelope on its software and services.

Apple's iPhone 6 could emphasize GPU compute
The next generation iPhone 6 and, in particular, the A8 system-on-chip (SoC) will need a new "buzzword" feature -- one that will put it ahead of the competition and serve as a marketing point. With the A7 it was "64-bit" and with the A8 it could be whatever marketing term Apple comes up with for what could actually end up being an implementation of AMD's (NASDAQ:AMD) Heterogeneous System Architecture, which essentially builds exactly the kind of programming model described above.

The reason Apple is so uniquely positioned to exploit this is that it controls both the hardware (i.e., the SoC) and the software (iOS and the key apps). It also works very hard to make its development tools as programmer-friendly as possible, which suggests if any company could actually drive mass adoption of such a paradigm, it's Apple. And, it could come as soon as the A8 SoC inside of the upcoming iPhone 6.

So, what does it all mean?
While this may not have a direct impact on the Apple investment thesis -- remember what the company sells; it's not chips -- it is likely that Apple will have a couple of neat whiz-bang features in its upcoming A8 SoC that will be quite marketable. A focus on GPU computing and the amazing performance/watt gains it can bring in the right applications could be one such selling point.