Sonic (NASDAQ:SONC) was rising by a whopping 10.4% on Tuesday after investors reacted with optimism to the company's latest earnings report. In an industry dominated by stagnant giants such as McDonald's (NYSE:MCD) and Yum! Brands (NYSE:YUM), Sonic is gaining market share, and the company has abundant room for expansion in the years ahead.

Management estimates that the unusually cold weather had a negative impact of between 2% and 3% in systemwide sales, but the company's performance was still materially better than the data reported by bigger industry players such as McDonald's and Yum! Brands during recent quarters.

Earnings per share for the quarter came in at $0.07, a 40% increase versus earnings excluding extraordinary items in the same quarter of the prior year, and better than the $0.06 per share forecast on average by Wall Street analysts.

Even better, guidance for fiscal 2014 was quite strong. Management expects earnings per share to increase in the range of 14% to 15%, fueled by same-store sales growth in the low single digits, better performance at company drive-ins, and 40 to 50 new franchise drive-ins during the year.

Growth drivers
Management believes the company will be able to generate growth rates in the area of 14% to 20% in earnings per share over coming years, an ambitious target that would position Sonic as growth leader in its industry.

In addition, sales leverage and technological innovations in areas such as point-of-sales and supply chain management are generating margin improvements for the company, and management plans to continue increasing margins in the future.

With nearly 3,500 drive-ins in 44 states, the company still has room for growth, and management is planning to increase units by between 2% and 3% per year in the medium term. Besides, the company has successfully increased overall royalty rates for new and renewed contracts lately. As long as sales and profit margins continue moving in the right direction, Sonic should be able to generate growing royalty revenues over time.

Since Sonic implemented its repurchase program in 2012, the company has bought back nearly $125 million in its own stocks, representing approximately 17% of shares outstanding. During fiscal 2014, management is planning to repurchase an additional $80 million, utilizing existing cash on hand and free cash flow.

In the words of CEO Cliff Hudson: "We will continue to focus on our multi-layered growth strategy, which incorporates same-store sales growth, leverage from higher sales, deployment of free cash flow, increasing royalty revenues and new drive-in development to build shareholder value. We believe all of these initiatives will enable us to continue to achieve double-digit earnings-per-share growth in the near and long term." 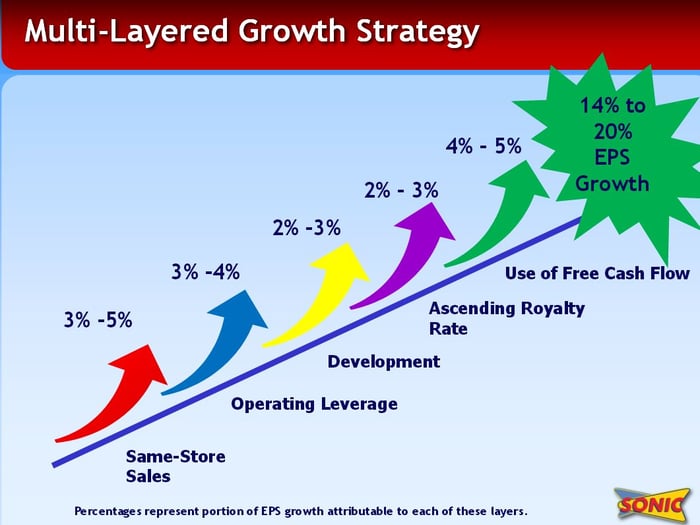 A small fish in a big pond
The fast-food industry is generating lackluster growth lately, as the market is quite saturated and many consumers are choosing healthier alternatives. However, Sonic has plenty of room for further growth by gaining market participations versus industry giants such as McDonald's and Yum! Brands.

McDonald's is facing considerable difficulties when it comes to generating growth over the last few quarters, especially in the U.S. This global juggernaut produced total revenues of more than $28.1 billion during 2013, but performance is stagnating as menu innovations have not been enough to reinvigorate sales.

Yum! Brands is another example of an industry giant with serious difficulties expanding sales in the U.S. lately. The company made almost $13.1 billion in sales during 2013, but same-store sales in the U.S. were flat for the year, and they even declined by 2% during the fourth quarter. While Taco Bell is generating modest increases in same-store sales, Pizza Hut and KFC are reporting worrisome declines.

With sales of only $110 million in the last quarter, Sonic has a long way to go before it reaches the same level of market penetration as McDonald's or Yum! Brands.

Bottom line
Sonic seems to be clearly moving in the right direction lately, and management has ambitious growth plans based on smart drivers. The company has plenty of room for growth as long as it continues to gain market share versus stagnant giants such as McDonald's and Yum! Brands, so this fast-food chain looks well positioned to continue delivering mouthwatering gains for investors in the coming years.