Investors are always encouraged to look at valuation and potential returns, but often ignore risk assessments. In the case of the sports-apparel sector, VF (NYSE:VFC) presents a compelling risk-reward proposition, particularly when compared with Nike (NYSE:NKE), lululemon athletica (NASDAQ:LULU), and Columbia Sportswear (NASDAQ:COLM). Why is this so, and what can investors expect from VF in 2014?

A quick look at the relative valuations of the stocks mentioned above reveals that VF is actually the second most expensive of the four. 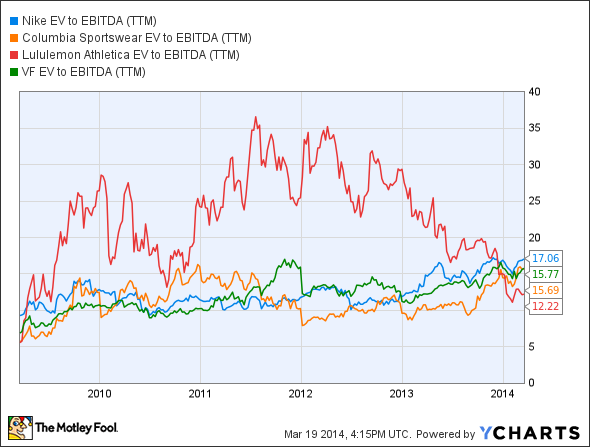 However, the diversification across its brands, sales channels, and geographies arguably makes it the most attractive opportunity in the group. Companies that are overexposed to one industry or profit driver can find it hard to adjust when the golden goose starts to get sick. For example, Nike's stock is up nearly 46% over the course of the last year, thanks to some strong performances within North America and the footwear category in particular. 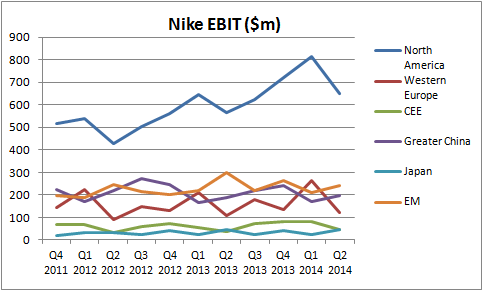 In other words, Nike has become increasingly reliant on North America, while it has underperformed in emerging markets like China. This is fine for now, and the company continues to do well; but be aware of the risk factor.

Similarly, as the first chart demonstrates, the market had long been in love with yoga-gear maker Lululemon. But a series of mishaps involving the sheerness of the company's signature black pants, senior management changes, and a significant reduction in guidance has hurt sentiment toward the company.

In short, Lululemon's risk is that it's trying to protect market position and margins in a highly competitive industry. It's unclear whether it can do this by relying on building a lifestyle cachet around the brand.

Columbia Sportswear is an interesting company in its own right; with its guidance for sales growth in the mid-teen percentages for 2014, the stock deserves a closer look. However, from a risk perspective, 84% of its 2013 sales came from its Columbia brand. This contrasts with VF, which saw its largest segment (outdoor and action sports) generate only 56% of its 2013 sales.

How VF differs
VF's diversity is easily demonstrated by a breakout of its 2013 coalition (its word for segment) profitability. 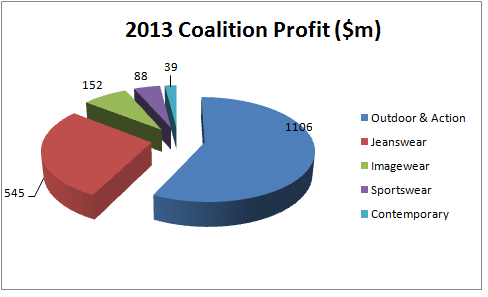 The largest coalition contains The North Face, Vans, and Timberland; another demonstration of its brand diversity. Moreover, management expects broad-based growth in all its brands, with the outdoor and action-sports coalition leading the way.

Clearly, its biggest brands are expected to grow the most. Probably the most impressive improvement is in Timberland. The brand only grew revenue 5% in 2013, but the fourth quarter saw a 13% increase; and Timberland appears to have turned the corner in Europe.

In fact, an improving, albeit slowly, European economy offers a growth opportunity for VF because good sales growth is easier to generate off a relatively weak base. The company generates 38% of its sales from its international operations.

In short, no one geography or brand is controlling the destiny of the company, and it has the opportunity to develop a given brand within a particular territory.

Good news, bad news
Interestingly, management estimates that marketing as a percentage of revenue will remain flat in 2014. This is a good sign because it indicates that VF is not being forced to increase spending in order to chase revenue growth. Investors would have had a right to be concerned on this point; the company actually missed its revenue guidance for 2013, and management had increased investments by an additional $40 million in the second half in order to generate revenue growth.

However, the major disappointment came from its jeanswear coalition, where the guidance looked weak. On the recent conference call, management outlined that growth in its international and U.S. specialty businesses would be offset by "continued sluggishness in the US mass channel and challenges in the US mid-tier department store channel." This is hardly surprising given the weakness seen in J.C. Penney and others in recent years.

Where next for VF?
VF's 2013 revenue grew 5% with adjusted earnings per share up 13%, and the company expects another strong year in 2014. In fact, management estimates revenue to grow 7%-8% with EPS forecast to increase 11%-13%. In addition, its free cash flow is expected to rise nearly 12% to around $1.4 billion, representing close to 5% of its current enterprise value (market cap plus debt).