Aside from the fact that the electronic-cigarette market has grown from virtually nothing to $1.7 billion in annual sales in a little over five years, one sign of the industry's maturation is the segmentation and innovation that's occurring absent government regulation. Having moved beyond simple nicotine replacement therapy, the industry now also encompasses "vaping" and "tanks," where users take pride in decking out their "mods" with bling as they enjoy flavored juices that they drip on coils.

Of course, politicians, anti-smoking crusaders, and regulators are trying to snuff out this cycle of growth and ingenuity through taxes, regulations, and prohibition, but the genie is already out of the bottle and it may be too difficult to contain it once again.

According to Wells Fargo, which assiduously tracks the e-cig market, sales are expected to hit $10 billion by 2017. That's still just a relatively small percentage of the overall $100 billion tobacco industry, but with triple-digit growth rates still in its future, e-cigs have the potential to eventually surpass tobacco sales. 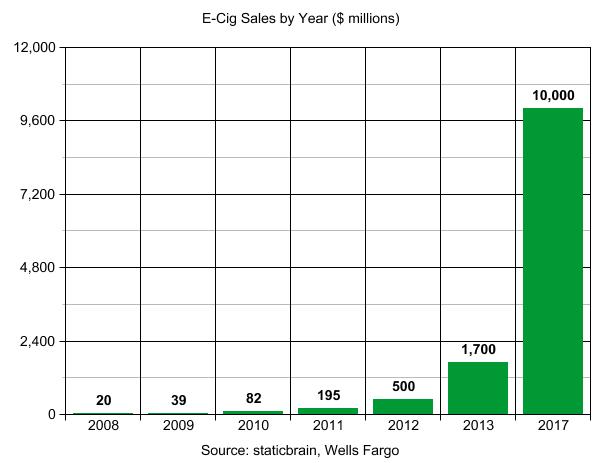 Of course, the tobacco companies understand this, and it's why they've jumped into the market with both feet, buying up smaller e-cig and vaping players. Lorillard (NYSE:LO.DL) was among the first to recognize the market's potential and bought blu eCig for $135 million in 2012 (and, more recently, SkyCig), quickly capturing the lion's share of the market, or around 40% these days, but as more of the tobacco giants introduce their own products onto the market, we'll likely see those percentages change.

For example, Reynolds American (NYSE:RAI) introduced its Vuse brand into the Colorado market last year and almost immediately captured 62% of the market there. Altria (NYSE:MO), which controls roughly half of the tobacco market, is rolling out its MarkTen brand and just purchased Green Smoke for $110 million, signaling the importance being placed on the category. Reynolds is even said to be eying a takeover of Lorillard in part to gain access to its lucrative e-cig business.

But perhaps more significant than all the jockeying for position going on with the tobacco giants is the culture growing up around e-cigs, vaping, and tanks, varying methods of all doing essentially the same thing: tobacco-less "smoking."

It's agreed that calling the early devices electronic cigarettes was an essential part of the growth process to get smokers to switch, but its equally true that calling anything a "cigarette" is going to be a lightning rod for controversy and carry with it a hard-to-shake stigmatism. That's part of the reason personal vaping systems are commonly referred to as "mods" these days, or a modified e-cig that describes a big-battery PVS. Some like to refer to them as "vaporizers," "wands," or "vape pens," but they can also connote marijuana usage as well and so invite a whole new level of disapproval.

What these devices really want to do, though, is simply distinguish themselves from "cig-alikes." Rather than being used solely as an alternative to smoking, vaping involves heating up flavored juices and puffing on inhalers for the enjoyment realized. Rebuildable atomizers, or RBAs, allow users to adjust the draw to deliver more flavor; vaping bars provide like-minded people a place to hang out in and talk vaping culture; and the "vaping lifestyle" is even chronicled in the pages of magazines like VPR and Vape.

In short, the industry has already grown, and inasmuch as it offers a safer means of ingesting nicotine, it also is much more than that. Convenience Store News reports that Wells Fargo says vaping has the potential to upset the growth dynamic of e-cigs completely. Because vaping and tanks are growing faster and have more committed users than e-cigs, they could surpass e-cigs, though they risk becoming commoditized.

Because the marketplace has been left unregulated, we've seen tremendous innovation. That will be stifled to a certain degree after the FDA promulgates its rules, but regardless of the impact on public health, cig-alikes, vaping, and tanks are a huge opportunity for the tobacco industry -- and Altria, Lorillard, and Reynolds American will be sure to control large swaths of it for years to come.