Tesla (NASDAQ:TSLA) stock is down about 17% from its all-time high of $265, which the company reached about a month ago. After such a considerable run-up during the past 12 months, a breather is to be expected. But has this significant pullback provided investors another buying opportunity?

The problem with disruptive companies
Companies with the best business models and the most sustainable growth stories will almost always trade at valuations that are difficult to rationalize, especially when iconic visionary CEOs like Elon Musk are at the helm. Heck, Mr. Musk is even Iron Man's friend.

One reason valuations of stocks with monstrous growth opportunities ahead often seem wildly optimistic is because investors typically imagine that a company's future prospects will develop in a linear fashion.

But linear thinking doesn't work for Tesla stock. Tesla's business is set to grow exponentially. And two major catalysts will serve the electric carmaker in the endeavor: a Gigafactory that houses more lithium-ion production than exists in the entire world today, and the first affordable fully electric car ever built with a meaningful range (about 200 miles). 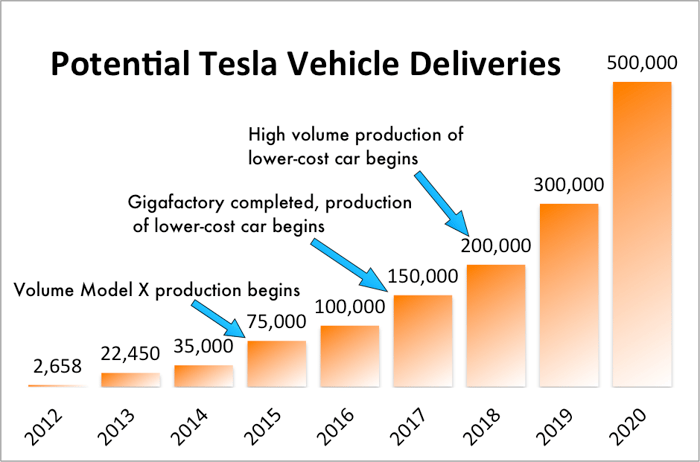 Data used in chart is based on a combination of comments from Tesla management, Gigafactory plans, and statements in the company's letters to shareholders.

Very few companies in history have had such incredible opportunity ahead of them.

If you're having trouble understanding how Tesla can deliver such robust figures, here is some follow-up reading.

Is Tesla a buy on the pullback?
Chances are, Tesla won't be trading at bargain levels again for years. Why? It's disruptive pure-plays like Tesla, with leading market positions, that often make the best long-term holdings -- think Apple, Amazon, and Google. So, don't expect to get these core holdings cheap so early in their story.

Given its $27 billion market capitalization (about half of General Motors), Tesla is priced to be disruptive. But with the underlying business, and Tesla's competitive environment suggesting that this expectation is realistic, this stock likely won't be getting any cheap treatment. Even more, very few analysts have given credit to the potential scenario in which Tesla's business growth actually exceeds the market's expectations, and with the help of a Gigafactory, Tesla will be in a position where that extreme outcome is a possibility.

That said, I'd say a pullback offers a great time for investors to pull the trigger on Tesla. Of course, investors should only do so if they've done their own due diligence and have their own confidence in why they bought shares. For growth stocks like Tesla, the ride will likely be volatile, making personal conviction in the underlying business all the more important to help you hold on to the stock over the long haul as Mr. Market serves up offers from one extreme to another.

Further, given the enormous forward-looking assumptions priced into Tesla's stock today, investors who decide the stock is right for their portfolios should buy shares in moderation. While there is plenty of upside opportunity for this stock, there is also a chance Tesla may not live up to the bullish assumptions the market expects from the company. One wise way to buy growth companies with premium valuations is to initiate a very small position, and slowly add to it over time, capitalizing if shares fall.