Freddie Mac released its weekly update on national mortgage rates on Thursday morning and, just as Freddie Mac vice president and chief economist Frank Nothaft predicted last week, rates are on the march back up.

Both 30-year fixed-rate mortgages (FRMs) and 15-year FRMs spiked sharply during the past seven days, with 30-year FRMs gaining eight basis points to reach 4.40%, and 15-year FRMs adding 10 b.p. to hit 3.42%. In both cases, these are the highest rates homebuyers have seen since mid-January.

As has been common so far this year, 5/1 adjustable-rate mortgage (ARM) rates followed the same tack as their longer-duration mortgage cousins, gaining eight basis points and returning to 3.10% -- the highest level since late January. Only one-year ARMs got cheaper, falling five b.p. to 2.44%.

Freddie Mac vice president and chief economist Frank Nothaft had warned last week that with interest rates on 10-year U.S. Treasuries rising, mortgage rates would likely move higher, as well. Today, he confirmed that thesis, blaming "the uptick on the 10-year Treasury note after comments by the Federal Reserve Board Chair Janet Yellen indicated a possible increase in interest rates as soon as early 2015." Adding to homebuyers' troubles, Nothaft noted that housing prices have gotten more expensive by 13.2% during the past year (through January). So in a nutshell, buyers face higher home prices -- and more expensive mortgages to pay for them. 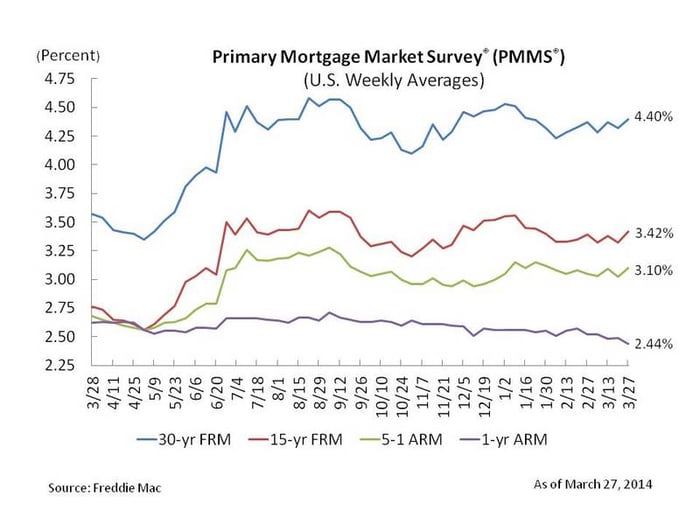