The Dow Jones Industrial Average (DJINDICES:^DJI) is flat today after mixed reports on the housing market and economy, while Verizon (NYSE:VZ) and AT&T (NYSE:T) are today's top Dow stocks. As of 2:45 p.m. EDT the Dow and the S&P 500 were hovering around break-even.

Verizon and AT&T are two of the top Dow stocks for the day, up 1.25% and 1% respectively. Verizon's and AT&T's businesses could take a hit this year as T-Mobile (NASDAQ:TMUS) has aggressively tried to take customers from the two, and Sprint (NYSE:S), which was bought last year by Japanese telecom giant Softbank , hinted at starting a price war.

A price war in the mobile space would be terrible for Verizon as the company recently took on $50 billion in debt to acquire the 45% stake in Verizon Wireless that was previously held by Vodafone. The acquisition debt raises Verizon's overall debt to $90 billion and gives the company a debt-to-equity level of 100%. This is higher than AT&T's 80% level but less than debt-to-equity levels of 160% for T-Mobile and 130% for Sprint.

T-Mobile was the first to strike, announcing a price cut on March 7.Verizon and AT&T are taking their challenger's threats seriously. Both companies recently released new wireless plans that are better for consumers but worse for carriers' businesses. At 12 and 10 times trailing earnings, both Verizon and AT&T look decently priced. This, however, assumes that their businesses do not deteriorate because of their challengers' actions.

Today's economic releases
Verizon and AT&T's businesses are not the only thing that look likely to deteriorate: The housing market continues to get worse.

The two to pay attention to are the GDP revision and the pending home sales report. While weekly unemployment claims approach a five-year low of 311,000, with the four-week moving average dropping to 317,750, the story on new unemployment claims remains unchanged. The jobs market continues to slowly strengthen as the economy slowly adds jobs. 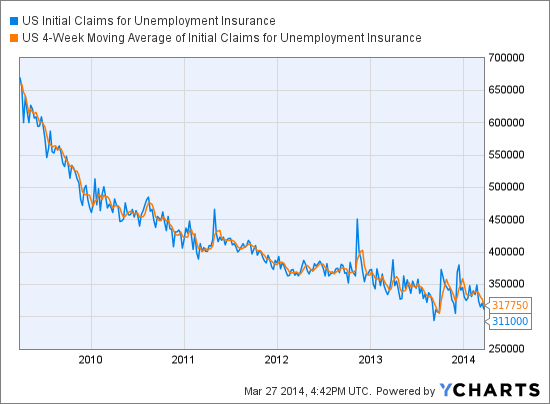 Q4 2013 GDP was revised upward to 2.6% real annualized growth, up from an initial estimate of 2.4% growth, but still well below Q3's 4.1% growth. 75% of the revision was due to increased estimates of consumer spending on health care likely related to the launch of Obamacare. The increase was also less than expected as gross private fixed investment was revised downward by 2 percentage points from 4.5% to 2.5% growth indicating businesses invested less than previously thought. Neither of these measures indicate increased confidence in the health of the economy.

The second report to pay attention to is the National Association of Realtors pending home sales index, which declined for the eighth straight month. The index has been falling since last summer as mortgage rates rose nearly 50% after the Federal Reserve first mentioned tapering. February's reading of 93.9 is the lowest since October 2011 when the index hit 92.2. A level of 100 indicates the level of pending home sales in 2001. The resurgence in the housing market was a large driver of 2013's economic growth and the slowdown will be felt across the economy.

Going forward, economists' expect Q1 2013 GDP growth of 2.8% but with the slowing housing market, terrible winter weather, and slowing trends in the purchasing manager's index a level of 2% to 2.5% seems more likely. With a slow growing economy and stocks markets priced at high levels, what should an investor do?