Declan Fallon
(fallond)
Author Bio
I am a self-confessed Blogger, Market Technician for ActivateClients.com, and Community Director of Zignals.com. Follow me on Twitter and Stocktwits @fallondpicks

Incyte Pharmaceuticals (NASDAQ:INCY) has been on a tear since its only approved drug, Jakafi, won FDA approval in November 2011 for the treatment of myelofibrosis, or MF. Management projects Jakafi sales to reach up to $335 million for this year; there's also a lot of talk about the drug's potential to treat a number of cancers, but much research remains before the Jakafi can contribute in this capacity to Incyte's bottom line. So how can the company maintain its $9 billion market valuation?

The investor view
Confidence in the stock grew in August, when Incyte reported positive survival data from use of Jakafi for pancreatic cancer, which earned it orphan drug status. Buyers moved in on subsequent earnings as Jakafi sales steadily increased and Incyte announced new trials -- not just for pancreatic cancer, but for breast cancer, colon cancer and non-small cell lung cancer, too. The sky may be the limit for Jakafi, but investors have quickly priced in expectations, with the company trading over 20 times sales. 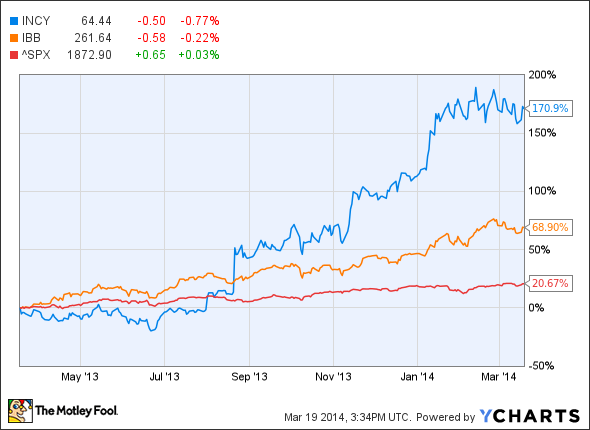 The company view
The company is focused on Jakafi submission later this year for FDA for the treatment of polycythemia vera, or PV. Like MF, PV is a bone-marrow disease, but Incyte says PV is significantly more prevalent, so an approval for treating PV would give Incyte an excellent opportunity to boost revenue.

In the meantime, Incyte is working with Novartis (NYSE:NVS) for both its MF and PV program. On the MF side, Incyte stands to gain $60 million in a milestone payment from Novartis if one more European country approves Jakavi (as the drug is known outside the U.S.).

Incyte has traveled far along in its development pipeline for its rheumatoid arthritis, or RA, treatment baricitinib, working with Eli Lilly (NYSE:LLY), and should have phase 3 results to present this year. Rheumatoid arthritis affects about 1.5 million in the U.S., presenting Incyte with a significant market opportunity. The phase 3 study will include comparative efficacy to current treatments, which will identify the market potential for baricitinib.  In addition, as an oral treatment it's likely to be preferable for use than existing injections, assuming comparable efficacy at minimum.

If baricitinib is approved, Incyte will be eligible for tiered royalties up to 20%+.  While the RA market opportunity is substantial, total revenue from royalty payments from a branded baricitinib is unlikely to exceed Jakafi revenue from MF and/or PV sales -- meaning Jakafi will remain Incyte's primary revenue driver for at least the next few years.

My view
While Incyte offers great potential, most of this potential is already priced in; not just for its MF program. but likely a large chunk of potential PV revenue, too. The only real surprise upside would be what the pancreatic cancer program can bring to the table.

Peak sales estimates for Jakafi in the U.S. seem to go no higher than $1 billion max. Royalty payments from Novartis for Jakavi (Jakafi outside of the U.S.) could add perhaps $200 million (my guess) if Jakavi reached another $1 billion in sales for Europe and the rest of the world.  Together, this offers a top estimate of $1.2 billion.

What of PV approval? According to Incyte, PV approval would generate another 25,000 Jakafi candidates, which could substantially increase the drug's revenue potential assuming high uptake (a big assumption). Of course, in the absence of approval, any revenue from a PV program is just speculation.

Finally, the excitement around the drug's pancreatic cancer research results will only burden expectations more in the near term. Incyte has adopted a go-it-alone approach here, assuming all costs and holding all rights. A phase 3 study with 300 patients is set to begin in the first half of this year; it will add to the company's fast-growing research and development expenditures, which last year climbed to $260 million.

R&D expenses consumed three-quarters of Incyte's total revenue. In addition, the relative increase in R&D costs for this year exceeded Incyte's relative revenue growth. This year, there may be additional costs for an expanded PV program (assuming approval), continued costs of Jakafi for MF, and funded phase 3 studies for its pancreatic research and rheumatoid arthritis program.

Not surprisingly, Incyte is walking a tightrope. Should the company receive Jakafi approval for PV, then Jakafi sales for MF and PV could reach $500 million in the next couple of years. However, heavier R&D costs will stress cash flow. The company has a roughly $500 million cash reserve to help provide security and funds necessary to drive these programs, supplemented by rising Jakafi sales, but at current prices, Incyte has perhaps gone too far too soon.