Philip Frost has never been shy about backing his investments. Frost, the former founder of IVAX, and Chairman of generic heavyweight Teva Pharmaceuticals, has big stakes in a variety of emerging health-care companies.  However, out of all his investments, he's likely watching Opko Health (NASDAQ:OPK)closest.

Frost has a truly massive stake in Opko that totals nearly 140 million shares, 398,000 of which were bought in March, according to SEC filings. That means Frost owns about 40% of Opko's stock. Since Frost has amassed such an eye-popping stake in Opko, let's take a look at the catalysts that may move Opko's shares this year, including Tesaro's (NASDAQ: TSRO) potential FDA filing. 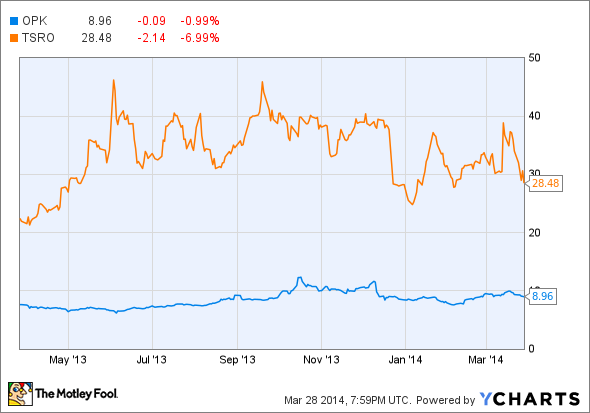 First, a bit of background
Frost is no rookie when it comes to building successful companies. His track record includes founding Ivax in 1987 and selling it to Teva for $7 billion in 2006. Frost built Ivax into a generic powerhouse by executing a series of acquisitions, and it appears he's executing a similar strategy with Opko, which has taken stakes in -- or acquired -- a variety of intriguing young companies in the past couple of years.

Last year, Opko acquired Cytochroma to get its hands on Cytochroma's vitamin D prohormone, and PROLOR Biotech, to lock-up technology that makes prohormones last longer so that patients require fewer doses. That technology has already been put to work on a long-acting Factor VIIa treatment for hemophilia that was recently awarded FDA orphan drug designation.

Opko also has an ownership stake in tiny Arno Therapeutics that gives Opko the right to eventually acquire it, and Cocrystal, a company that's working on hepatitis C therapies. In January, Frost helped orchestrate the merger of Biozone, a company in which Opko had previously held a 12% equity stake, with Cocrystal. That deal effectively locks up control of Biozone's technology for improving how topical therapies and OTC products are absorbed through the skin.

Additionally, Opko has an equity stake in Tesaro, the company that licensed Opko's anti-nausea drug Rolapitant, and a 19% equity stake in sRNA company RXi Pharmaceuticals, which Opko received in exchange for all of Opko's RNAi technology in March 2013.

Converting products into profit
Opko was dealt a blow in December when Tesaro reported that Rolapitant failed to meet a secondary endpoint in trials. That dashed investors' hopes for a slam dunk across both the trials' primary and secondary endpoints, sending shares in both Opko and Tesaro reeling. However, Rolapitant did succeed in achieving its primary endpoint for reducing vomiting, and that has Tesaro on track to file for FDA approval later this year. If approved, Opko will collect a milestone payment, as well as double-digit royalties on sales.

Opko is also in the process of launching its 4kscore test. That test provides doctors with a new prostate cancer screening tool that may reduce the number of unnecessary biopsies tied to false positive PSA tests. Opko will conduct those tests at its own lab, and eventually plans to provide the test as part of a point-of-care solution for doctor's offices.

In addition to those two developments, Opko expects to report later this year how its vitamin D drug Rayaldy, acquired in the Cytochroma deal, performed in phase 3. That trial has a scheduled completion date of June 2014.

Fool-worthy final thoughts
A lot is going on at Opko this year that investors will need to track. Investors will get an early read into demand for the 4kscore prostate test during the next couple quarters, should see Tesaro file for Rolapitant approval, and learn how Rayaldy did in trials, too. If Rayaldy's results are favorable, Opko plans to file for FDA approval in 2015. If so, that would mean Rayaldy could begin contributing meaningfully to Opko in 2016.

Opko could use one (or more) of these products to pan out because it's burning through cash. The company exited last quarter with $185 million in cash, but its costs totaled $176 million last year. That handily dwarfed its $96 million in revenue, and suggests that investors should still consider Opko a speculative play, albeit an intriguing one.