Keeping up with the latest mobile trends can be a daunting task for tech investors. But there are a few major patterns that can be gleaned from global data that can be applied to future investing decisions. Last month Cisco Systems (NASDAQ:CSCO) released a Global Mobile Data Traffic Forecast report, which offers some great insights into wireless trends and how companies can stay ahead of the curve.

1. Total worldwide mobile traffic reached 1.5 exabytes per month last year, or about 1.5 billion gigabytes. That's an increase of about 81% from 2012.

2. Mobile is growing at a ridiculous pace. The total amount of mobile data traffic last year was almost 18 times higher than all global Internet traffic in 2000.

4. Though 4G connections account for less than 3% of mobile connections, they generate 30% of all mobile data traffic.

What to make of the data
The increased mobile usage trends are only growing. By 2018, 4G will make up 15% of device connections, but will account for 51% of traffic. 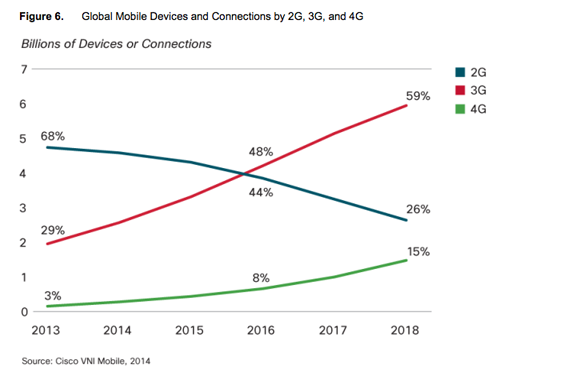 These trends are one of the reasons why the No. 3 US carrier, T-Mobile (NASDAQ:TMUS) is upgrading all of its 2G network to LTE by 2015, and why AT&T (NYSE:T) spent $15.9 million last year on lobbying issues like wireless spectrum. Even as the US has one of the most expansive 4G networks, wireless carriers know more data usage is on its way.

Not to be outdone, China has begun a massive rollout of 4G connectivity, with China Mobile (NYSE:CHL) leading the way. The company was the first Chinese carrier to introduce 4G back in December, and has currently built more network base stations than exist in all of Europe .

Investors looking for carriers that are on the cutting edge need to consider how quickly the companies are building out their networks, and how much capacity they can handle. Even with some future mobile traffic being offloaded onto to Wi-Fi networks, the big winners will still be the carriers that can handle massive amounts of data for the most users.