In the world of major college sports, most D-I recruits are gauged by athletic skill first, academic ability second. This reality, coupled with the fact that programs typically require players to train more than they study, pushes one to wonder if the term "student-athlete" is dead. Criticisms are especially valid in sports like men's football and basketball, when millions of dollars in revenue are generated per school.

While there's no telling if recent unionization efforts at Northwestern University will spread beyond Evanston, Illinois, the saga does stimulate a discussion worth having: How much is a big-time college athlete worth?

On the football field
According to a study from the NCPA and Drexel University, the "fair market value" of an average FBS football player was a little over $120,000 in 2011. This sum was calculated by imagining the NCAA as a revenue-sharing system, much like the NFL or NBA. As you might expect, the biggest universities have the most valuable athletes.

University of Texas leads college football with over $100 million in revenue each year, and as a result, fields athletes worth an average of more than $500,000.

Of course, they're recouping most, if not all, of this value through scholarships, right? Not exactly. The study also indicates that among the schools with the 10 highest fair market values, every single one shortchanges its football players. This occurs when a scholarship is worth less than the cost of attendance, and on average, the gap is over $3,000 a year in the FBS. 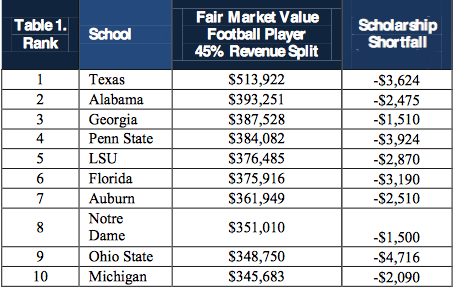 Chart via "The Price of Poverty in Big Time College Sport." Scholarship shortfall figures from 2010-2011 season.

Out-of-pocket, non-scholarship expenses are expected for any college kid, sure. But if Northwestern's recent NLRB case tells us anything, it's that football players are athletes first, students second, and thus, employees entitled to at least a break-even wage.

On the basketball court
That same study calculates the average D-I men's basketball player to be worth a little over $260,000. This value is higher because unlike football, basketball teams typically roster no more than 12 players. 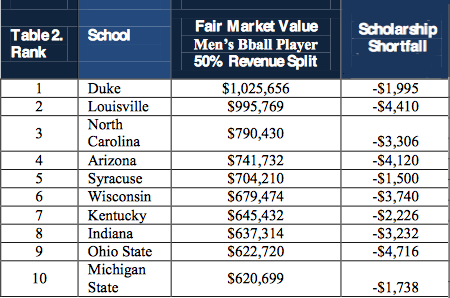 Chart via "The Price of Poverty in Big Time College Sport." Scholarship shortfall figures from 2010-2011 season.

Writing for The Atlantic, sports economist David Berri recently took another look at the numbers. Using a model that attributes team wins to different players, his math reaches a value within 5% of the NCPA-Drexel figure. Although Berri focuses on the University of Kansas, the conclusions remain the same: Because basketball players are scarcer than their football brethren, they're worth more on average.

The bottom line
Unfortunately, a higher fair market value doesn't seem to help an athlete from being shortchanged. While Northwestern football players are seeking a union to negotiate practice times and better health care, it's possible that, at least at private schools, their efforts could pave the way for scholarship shortfalls to be eliminated.

Most likely, a fix would come in the form of an extra monthly stipend. And while that won't pay some athletes what they're truly worth to their universities, it's a step in the right direction.