Please ensure Javascript is enabled for purposes of website accessibility
Free Article Join Over 1 Million Premium Members And Get More In-Depth Stock Guidance and Research
By Leo Sun - Mar 29, 2014 at 8:48AM

Internet radio service Spotify could go public later this year. Can it succeed in a crowded market dominated by Pandora and Apple?

Popular music streaming service Spotify could be going public later this year. The company is reportedly in informal discussions with potential underwriters to file an IPO for the six-year-old company, which is dwarfed by Pandora Media ( P ) and Apple's ( AAPL -0.32% ) iTunes Radio in the U.S. Internet radio market.

Pandora has stated that it controls 70% of the streaming radio market and 9% of the overall radio market in the United States. Both figures were based on overall users and listening hours. Spotify, which is based in Sweden, is notably the top streaming service in the U.K. and is currently available in 55 countries.

However, a recent survey of over 2,000 Americans compiled by Edison Research and Electronista revealed very different figures, with Pandora leading with a 31% share in streaming radio, iHeartRadio in second with 9%, iTunes Radio in third with 8%, and Spotify in fourth place with 6%. Some believed that the survey proved that iTunes Radio was the fastest growing streaming service ever, but it only counted total listeners and not total listening hours -- a key metric in measuring market share in music streaming.

Why Spotify isn't Pandora 2.0
It's tempting to simply consider Spotify as a smaller version of Pandora. Fundamentally, however, the two companies are quite different.

Spotify has over 6 million paid subscribers and 24 million active users. Pandora had 80 million users when it went public in June 2011, and currently has over 250 million registered users. However, only 75.3 million of those users are actually active listeners, while a mere 3.3 million of those pay for its Pandora One service.

In other words, Spotify listeners are more likely to pay for an ad-free subscription than Pandora customers. The irony is that Spotify costs more than Pandora, at $4.99 (Unlimited) to $9.99 (Premium) per month. Pandora charges $3.99 (existing users) to $4.99 (new users) monthly.

Spotify's top-line growth potential could be throttled due to its smaller listener base. But since a higher percentage of Spotify's users are paying for their subscriptions than Pandora's, Spotify also has a better chance at growing its revenue faster than Pandora if it gains more users. Spotify also doesn't have to rely on the wobbly market of ad-based revenue -- which means that its growth will be much easier to calculate from overall user growth.

One of Spotify's core strengths is the size of its music library. With 20 million songs, Spotify's library is comparable to Apple's 27 million iTunes songs and much larger than Pandora's catalog of one million songs.

The real problem: royalty rates
However, the balance between subscription and advertising based revenue isn't the biggest issue for Spotify, Pandora, or Apple -- royalty rates are.

Spotify reported that it has paid $1 billion in revenue to rights holders since its launch in October 2008. Pandora pays over half of its annual revenue to SoundExchange, a non-profit organization designated by the Copyright Royalty Board to collect and distribute royalties. Spotify pays nearly 70% of its royalties to artists, with a large portion of that going to SoundExchange as well.

For Spotify, this is a growing problem. As seen in the following chart from the company, the company will pay out $500 million in royalties in fiscal 2013, and it doesn't have much negotiating clout when Pandora and Apple have more market recognition. 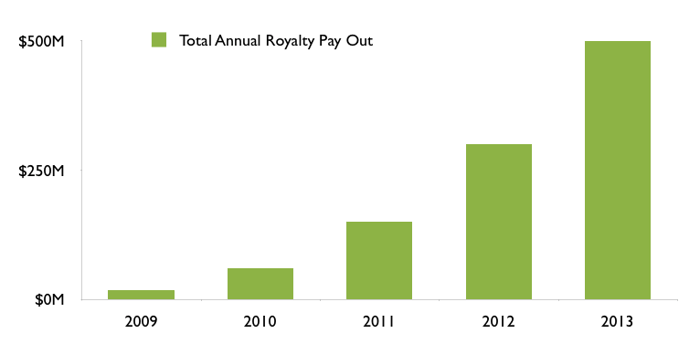 To make matters worse, Spotify already pays a premium rate per streamed song -- it pays rights holders between $0.006 and $0.0084 per song. By comparison, Pandora pays approximately $0.0012 per listen, while Apple pays $0.0013 along with a percentage of its advertising revenue.

As a result, Spotify's revenue soared 129% year-over-year to €435 million in 2012, but its net loss widened from €45.4 million ($62.4 million) to €58.7 million ($80.7 million). The divergence of top and bottom line growth in opposite directions is troubling, and indicates that no matter how much revenue the company generates, it's doomed to pay it all back in royalties.

It's a tough market, but it's a growing one
Yet despite these big challenges, companies like Spotify, Pandora, and Apple continue to target the streaming music market for a simple reason -- it's growing fast.

A report from the Recording Industry Association of America (RIAA) revealed that subscription, advertising, and licensing revenues from streaming services rose 39% year-over-year to $1.4 billion in 2013. Global streaming music revenue also rose 51% last year, according to the International Federation of the Phonographic Industry (IFPI).

Meanwhile, a Nielsen SoundScan report revealed that U.S. digital album sales fell 13% and digital track sales fell 11% for the week ending on March 9, which came as a sobering blow for market leader iTunes, which accounts for over 40% of U.S. recorded music revenue. That's why Apple is reportedly planning to release a separate iTunes Radio app, which separates it from its iOS Music app -- an aggressive move clearly aimed at challenging Pandora and Spotify on iOS devices.

An ideal streaming radio business model would consist of lower royalty rates, higher paid membership rates, and lower listener hours (to keep per-listen royalty rates in check). Unfortunately, Spotify, Pandora, and Apple (or any other company in the industry) have yet to achieve all three.

The bottom line
In conclusion, Spotify has a strong paid user base, which will result in steadier revenue growth and it has a huge music library. Unfortunately, it also pays higher royalty rates and it doesn't have much control over its margins or profitability.

However, Pandora also suffered from some similar issues when it went public, and the stock is now up 87% from its IPO price of $16, and has rallied more than 120% over the past 12 months. Therefore, pent up interest for another publicly traded Internet radio company could cause shares to surge out of the gate.