Wal-Mart's (NYSE:WMT) reputation for low prices has been a primary driver behind the company's rise to become the largest retailer in the world. This reputation has only continued to grow as the company uses its unprecedented scale to obtain the best prices from vendors, which in turn allows for continued pricing below the competition. Investors that have witnessed this virtuous cycle over the past couple of decades have been rewarded with solid market outperformance.

Meanwhile, Wal-Mart has been able to fend off competition by offering price matching for advertised prices from competitors. This tactic has since been mimicked by rivals including Target (NYSE:TGT) and Best Buy (NYSE:BBY). To stay one step ahead of the competition, Wal-Mart recently unveiled its latest weapon in the ongoing battle for price-conscious consumers: Savings Catcher.

What is Savings Catcher?
Savings Catcher has the potential to take price matching to the next level.  Customers simply take a Wal-Mart receipt, type the receipt number into the Savings Catcher website, and Wal-Mart will search for lower prices on thousands of grocery, household consumable, health, and beauty products. If a lower price is identified, Wal-Mart will notify the customer and provide them with a Wal-Mart e-gift card. This saves bargain-hunting consumers from having to sift through ads as was required in previous price matching programs. 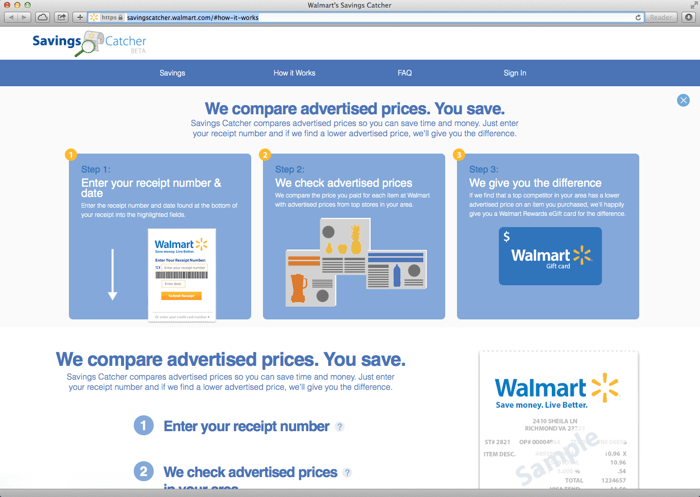 The concept is revolutionary. As a result of the groundbreaking nature of establishing systems to compare prices to those advertised by competitors, Wal-Mart is rolling out the service gradually. Savings Catcher will initially be available only in seven cities, including Atlanta, Charlotte, and Dallas. Additionally, the eligible products will be limited to the categories noted above, and will not include categories such as media, electronics, and apparel at this time.

What will the impact be?
While Savings Catcher certainly has the potential to disrupt the competitive environment among discount retailers, its impact is far from certain. First, seemingly savvy price comparison technology has not always been adopted as initially expected. An excellent example is Amazon.com's Price Check app, which failed to gain customer acceptance for a number of reasons.

A big unknown at this point is how quickly the number of competitors and the array of included products will be expanded. In the test markets, Wal-Mart has only listed a selection of 10-20 competitors per market for which it will compare prices; this group typically includes Target, grocery stores, dollar stores, and pharmacies. However, there is currently no known plan to expand the service to include Best Buy, Costco Wholesale, and many others. The service is also limited in that online purchases from walmart.com are not eligible, and as noted previously prices offered by Amazon.com will not be eligible for matching.

Impact on investors
At best, Savings Catcher has the ability to further shift bargain-conscious shoppers from other competitors to Wal-Mart. This could place pressure on the results of grocery stores, dollar stores, and discounters such as Target that are all fighting for market share. If successful, Savings Catcher could become a contributor to same store sales increases at Wal-Mart.

However, given the limitations of the program as currently announced, it is entirely possible that this won't have any meaningful impact on the competitive environment at all; Wal-Mart is already regarded as the leader in price for most products, so consumers that have opted for warehouse clubs such as Costco or the convenience and selection of online retailers like Amazon.com are not likely to migrate to Wal-Mart given that Wal-Mart does not appear willing to match these retailers on price.

As a result, a prudent course of action for investors is to monitor the trials of Savings Catcher and keep expectations realistic. If the concept gains significant momentum, this could be a significant opportunity for Wal-Mart to use its scale to its advantage once again. But without some sense of consumer response, it is premature to start adjusting valuation multiples and growth projections quite yet.