If you have watched House of Cards lately on Netflix, you may be wondering if the things that happen in the show are possible. No, I'm not talking about the scandals and murders, I'm talking about the situations that provide the backdrop for this season. Are the United States and the rest of the world really reliant on China for rare-earth elements? Are we really at risk of an energy crisis that could lead to nationwide blackouts?

One way to make compelling television is to take a truth and embellish on it, but these matters are not so overblown. Let's look at the two issues that House of Cards uses this season and why they actually do matter in the worlds of energy, industry, and politics. 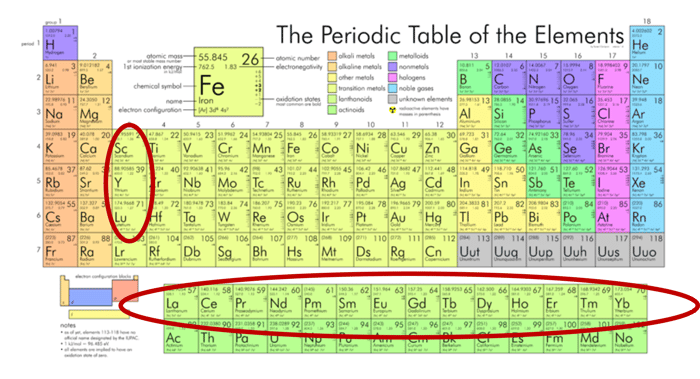 These elements are incredibly valuable because of their unique physical and chemical properties. They are pretty much found in all modern electronics, wind turbines, and lasers. As noted in the show, they can be used in nuclear reactor control rods to absorb neutrons that can cause nuclear fission.

Rare-earth elements are actually quite abundant, so a more appropriate name might be "rarely economical to build a mine" elements. China exploited its operations to take control of somewhere between 80% and 95% of global market share. Along with receiving an economic boost, China has used this position as leverage in the world of manufacturing. Since the early 2000s the nation has slowly reduced exports of rare-earth elements to keep them for domestic use and encourage manufacturers to set up shop there. One reason Apple has such a large presence in China is secure, stable access to the elements it needs for making its products.

Beijing's policy has irked the rest of the world, and the U.S., Europe, and Japan have all filed complaints with the World Trade Organization arguing that export quotas violate the WTO charter. 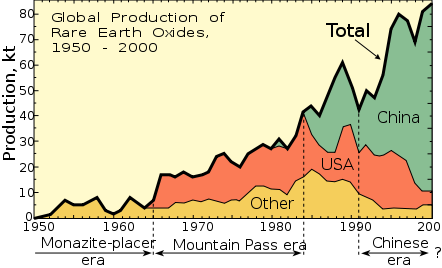 Is reality as troublesome as HoC portrays? Yes, but it is getting better
China was able to corner the rare-earth element market not only in part because it had the supply, but also back in the 1990s it forced other players out by undercutting prices via cheaper labor and less stringent environmental policies. That massive market enabled it to control prices and limit exports. Unfortunately for China, it may have gone a little too far with these measures.

The World Trade Organization in October agreed that its charter was being violated by China's practice of export quotas. China will likely appeal, but it is also taking steps to consolidate all rare-earth element production under a single state-run enterprise. The country says it is doing this to ensure environmental protection and prevent illegal smuggling of the materials, but many believe the move is a way to control exports through production rather than export quotas.

China's policies have also driven rare-earth prices high enough that many previously uneconomical mines in other nations are commercially viable again. Molycorp (NYSE: MCP) recently restarted production at the United States' only mine, in California, and expects to reach a production rate of 19,050 tons per year -- equivalent to 15% of global production -- by the end of the decade. Mines are also taking root in Canada, Australia, and various nations in Africa. If these mines prove economical, they would take a sizable bite out of China's market share.

Satelite Images of the Northeast before and during blackout of 2003 (Source: National Oceanic and Atmospheric Administration).

A potential energy crisis on our hands?
We may not think much about it, but getting electricity to our home and office is a complicated and delicate process. One glaring example of the sensitivity of our electricity distribution system is the world's second-largest blackout that hit the U.S. in 2003. While there were several factors that left 10 million people without power for days, the breakdown of the entire system was traced to some branches that fell on transmission lines in Ohio.

But all know that nature can wreak havoc on our electrical system. In House of Cards, a power-hungry businessman deliberately shuts down power plants to overload the system and cause massive blackouts. Surely there is no way this can happen, right?

Is reality as troublesome as HoC portrays? Ask California
Let's go a little further back in time to 2000, when California was about to experience more than two years of rolling blackouts across the state. The state had partially deregulated the utility market to encourage competition and hopefully drive down the price of wholesale electricity. What California's leaders had not anticipated, though, was that wholesale producers would withhold generation to drive up prices and cause massive blackouts in the process. 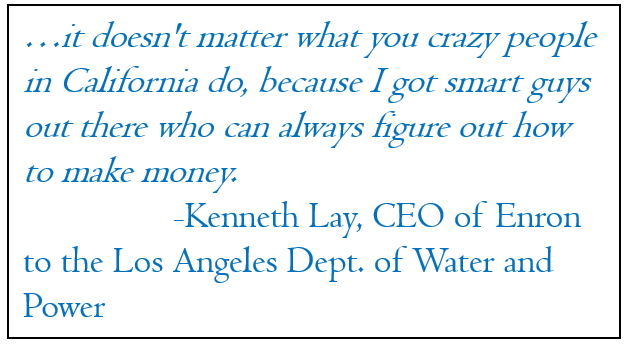 Who exactly would be behind such a dastardly plot that led to the bankruptcy of a major regulated utility company -- Pacific Gas & Electric -- and cause millions of Californians to lose power during the dog days of summer? None other than America's poster child for corporate abuse and fraud, Enron. Through some fancy -- and illegal -- manipulations, including electricity laundering (obscuring the origin of generated electricity to charge out-of-state premiums) and overscheduling (deliberately shutting down some power lines to push other lines beyond capacity and charge a premium), the company made millions of dollars a day taking advantage of this partially deregulated market.

The Federal Energy Regulatory Commission enacted rules to cap wholesale prices, which coincidentally happened just before Enron went under. Go figure. However, there is no way of knowing with absolute certainty that market manipulation will never happen again. Market manipulators, tree branches, and even a 2013 attack on a substation in California all go to show one thing: the way we generate and distribute electricity teeters on a knife's edge. Even the most minute disruption can have massive reverberations throughout the system.

What a Fool believes
The creators of House of Cards have done an amazing job shaping these close-to-home issues into a compelling narrative. They may even draw attention to a couple of issues that might otherwise be overlooked when we turn on a light switch or use an electronic device. You might very well think that something should be done to prevent these situations from happening. I couldn't possibly comment.