Global expansion is at the center of farm-equipment major Deere's (NYSE:DE) goal of hitting $50 billion in annual sales by 2018. It expects to earn half of its top line from outside the U.S. and Canada, the company's matured markets, and is banking on high-growth emerging economies such as Brazil, China, and India. The latter, as the world's second-most populous nation and the largest tractor industry, is understandably one of Deere's priorities.

Here's a lowdown on India's prospects and challenges, and how the company is leveraging that situation.

A cash cow with its share of problems
India has the second-largest amount of agricultural land, and holds the No. 2 position in production of rice, wheat, and cotton in the world. It's a net exporter of ag products with exports reaching $41 billion in 2012-13. Yearly, more than 500,000 tractors are sold in India -- compare this with U.S. 2013 tractor sales of 201,988.

A good monsoon (rainy season) in 2013 buoyed the Indian agriculture sector, which is expected to grow between 5.2% and 5.7% in the 2013-14 agriculture year (in India this starts July and continues through the following June), compared with 1.9% in the last cycle. This has pushed up the demand for tractors by more than 20% since May 2013, and the uptrend could continue for another two to three years. Other factors aiding demand are government funding, a labor shortage, greater accessibility to farm credit, and the expansion of custom hiring services.

But the country has its fair share of challenges, too. The biggest impediment is that more than half of India's agriculture is rain-fed, as irrigation facilities are still at a nascent stage. A bad monsoon wreaks havoc on farmers' incomes and power to buy machinery.

Small and fragmented land is another hindrance that reduces returns and makes equipment purchases unfeasible. Finally, there is the immense economic diversity of the farming community. Farmers in many parts of the country still use century-old methods such as bullock carts to till their land, and it's going to take a long time for them to warm up to tractors, let alone other forms of mechanization.

India on Deere's mind
Deere is well aware of the pros and cons of the Indian ag sector and has been taking calculated steps in entering the country. It has three factories and various technology, learning, and development centers in the nation.

The Sanaswadi factory near the city of Pune makes tractors and engines, and includes integrated transmission and assembly facilities. The company makes the 5000 Series tractors at this plant. Tractors are also exported to the U.S., Mexico, Turkey, North and South Africa, and Southeast Asia. Deere set up its second tractor factory in the state of Madhya Pradesh at Dewas in January 2012 to manufacture small tractors for domestic sale and exports. In the same month, it started its first combine manufacturing factory in India at Sirhind.

Deere plans to open a parts distribution center at the city of Nagpur by late 2014 to increase parts facilities floor space. J.B. Penn, chief economist at Deere, recently told the India Brand Equity Foundation, a government of India trust, that the company does all of its engineering for small and midsized tractors in India, and is the "largest tractor exporter from India, sending products to over 69 different countries."

Deere is not alone in its India endeavor. CNH Industrial's (NYSE:CNHI) factory in Uttar Pradesh makes tractors under the New Holland brand, and reached the 250,000th tractor milestone in 2013. CNH has been molding its products in accordance with the Indian farm size -- the cotton picker prototype, especially designed for the South asian state, is being tested and could hit the market in two years. CNH plans to invest about $90 million to build a new factory in Pune for manufacturing cane harvesters and cotton picking machines. It already has a cane harvester assembly unit near Pune.

U.S. agriculture equipment major Agco (NYSE:AGCO) is active in India through its 23.75%- share holding in Tractor & Farm Equipment (TAFE). TAFE makes Massey Ferguson tractors for domestic sale and exports, and is the second-largest tractor maker in India with a 25% market share and sales of roughly 150,000 units (domestic and foreign) per year.

Government support
The Indian government is adding resources to increase farm productivity through mechanization. It has opened Farm Machinery Training and Testing Institutes to train farmers on the use of modern machinery, including tractors, and has granted subsidies for machinery purchase. The National Mission on Agricultural Extension and Technology, with an outlay of close to $2.09 billion spread over five years, will help farmers adopt appropriate technologies.

In its first-quarter presentation in February, Deere said "government focus on mechanization" will help boost sales in India. 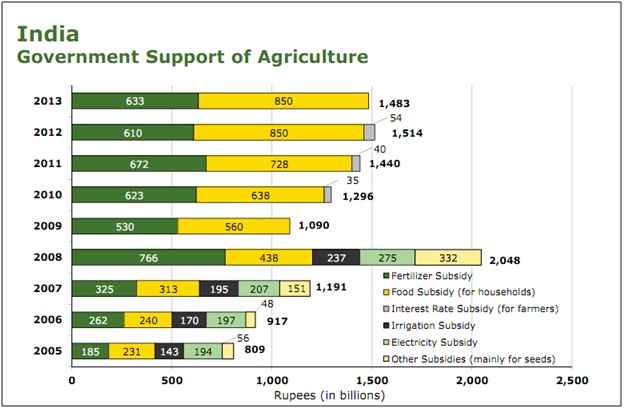 Foolish takeaway
In spite of the challenges, growth potential of India's agricultural sector is huge. To keep up with the burgeoning population's food demand at home and benefit from exports overseas, India will continue to need ag equipment. The government's support is coming in handy. Deere's on the right path, offering products suiting Indian taste, such as mid- and small-size tractors. The company stands to reap rich benefits in the future.