This very successful entrepreneur says "goals are for losers." Instead, focus on building a repeatable system for success.

In the 1970s, Scott Adams invented a rosin bag that attached to his tennis shorts. He used the rosin bag to improve his grip on his tennis racket. He liked the product, but he failed to sell it and his invention flopped.

Among the froth of the dot-com boom of the late 1990s, Adams invested in a start up called Webvan. The company promised to revolutionize grocery shopping, much like Amazon.com ( AMZN 2.80% ) was revolutionizing book sales.  Webvan built distribution hubs in major markets, bought trucks, and began accepting orders. Soon after the company announced that several of its hubs were now cash flow positive -- the investment it seemed was working.

It was just weeks later that Webvan announced it was going out of business. Adams lost his entire investment.

Adams has also failed in the restaurant business, and once even passed up a promotion that would have rocketed him to upper management in a thriving bank.

Why should you care about Scott Adams and his variety of business and entrepreneurial failures? Because Scott Adams eventually created Dilbert. And he is certainly one of the most successful people you've probably never heard of.

"Goals are for losers"
When Adams reflects on his success, he does not see rosin bags or restaurants or Webvan as failures. He sees them as steps on a systematic journey to success.

Goals can be a very discrete and absolute thing. You succeed or fail. When its done, its done. Goals are finite in this way. And as such, Adams wrote in the Wall Street Journal late last year that,

"goals are for losers. That's literally true most of the time. For example, if your goal is to lose 10 pounds, you will spend every moment until you reach the goal—if you reach it at all—feeling as if you were short of your goal. In other words, goal-oriented people exist in a state of nearly continuous failure that they hope will be temporary.

If you achieve your goal, you celebrate and feel terrific, but only until you realize that you just lost the thing that gave you purpose and direction. Your options are to feel empty and useless, perhaps enjoying the spoils of your success until they bore you, or to set new goals and reenter the cycle of permanent presuccess failure."

Or is the takeaway that goals should be used as part of a bigger system. A system that includes a set of rules and a pattern of behavior that is maintainable, sustainable, and will create a continuous cycle for improvements. When you achieve a goal, that goal is now just a step higher in a larger strategic plan. 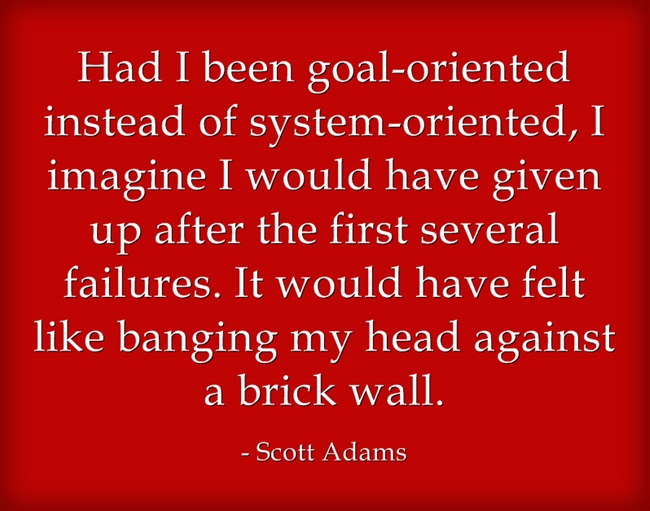 Creating your strategic plan
Scott describes the first time he realized that success is far more about your system than your goals while he was on an airplane, just out of college:

Just after college, I took my first airplane trip, destination California, in search of a job. I was seated next to a businessman who was probably in his early 60s. I suppose I looked like an odd duck with my serious demeanor, bad haircut and cheap suit, clearly out of my element. I asked what he did for a living, and he told me he was the CEO of a company that made screws. He offered me some career advice. He said that every time he got a new job, he immediately started looking for a better one. For him, job seeking was not something one did when necessary. It was a continuing process.

It was a continuous process. Let that sink in for a minute.

Now let's apply that to investing and personal finance, and who better to illustrate the point than the Oracle of Omaha himself, Warren Buffett.

Buffett is 83 years young and has been at the helm of Berkshire Hathaway for over 40 years. Over that time, he has made countless investment, many poor but many very successful. He has refined his analytical and strategic thinking with each, while not straying from the value oriented approach he learned at Columbia Business School. Berkshire Hathaway ( BRK.A 0.85% )( BRK.B 1.28% ) over that time became his vehicle to execute his system of investing.

If Buffett was following a goal oriented approach, he likely would have retired in the 1980s. Financially, he and his family were set for generations to come. Instead though, he kept tending his portfolio as he always had. Find great companies, invest in them heavily, and then let the companies do the work for him.

Excluding the impacts of inflation, Buffett's fortune in 1983 represents less than 1% of his net worth today. Less than 1%!! Now he is giving away nearly all of it -- instead of his family being set for generations, his wealth will transform the lives of millions and millions of others. Its reminiscent of Andrew Carnegie, who gave to charity not only his entire worth, but also his system for building that worth. Carnegie's causes are still thriving today, and he died 95 years ago.

The next time you sit down to set a personal financial goal, consider instead crafting a repeatable system, a strategic plan that goes far beyond any singular goal. Systems are resilient to failure. Systems keep working when you come up short. Systems provide a safety valve that goals do not. Goals are static; a good system constantly changes and improves.

Buffett, Carnegie, and Adams are clearly exceptions to the rule; we all can't be as wildly successful as Dilbert or Berkshire Hathaway. But we can mimic the approach these exceptions take.

Don't focus on your retirement age or your magic number to turn in your retirement papers. Instead, focus on adding to your savings every month, investing in companies that you know, understand, and believe in, diversifying yourself to protect from unforeseen shocks. Build a portfolio that reinvests in itself, that can survive and thrive without your quarterly tinkering.