Tesla Motors' (NASDAQ:TSLA) growth story continues to accelerate in 2014, though there have been many twists and turns in the road. The abundance of news that comes out about the electric-vehicle maker can make it challenging to keep up to date. So a summary of the notable events involving Tesla during the first quarter of 2014 might prove handy.

First, a word about Tesla's stock: It's up 41% since the start of 2014, and has gained 460% in the past year. While there's no doubt that the stock is "overvalued" using conventional valuation measures -- its forward P/E is 54.7, for instance -- it's also true that nearly all turbocharged growth stocks are overvalued while in their early high-growth phases.

Growth accelerates with release of Q4 earnings and 2014 guidance
In February, Tesla announced fourth-quarter 2013 results that crushed analysts' estimates, and provided better-than-expected 2014 guidance. The company's adjusted earnings were $0.33 per share, handily topping the $0.21 consensus, while its revenue rose nearly 150% from the year-ago period to $761 million, also beating the $677 million analysts had expected.

Tesla met its gross margin goal of 25% (excluding sales credits for zero-emission-vehicles), as its adjusted gross margin was 25.2%, while gross margin on a GAAP basis was 25.8%. For context, BMW's and Daimler's gross margins are 19.9% and 21.5%, respectively, over the trailing-12-month period. Tesla expects to improve its gross margin to 28% by the end of this year.

Supercharger build-out continues
There are now 82 Supercharger stations in North America. Tesla's goal is to have 80% of the U.S. population and parts of Canada covered by the end of this year, and 98% coverage by 2015.

Tesla has 14 stations in Europe, where it's systematically building out coverage. It started with Norway and is now focused on Germany, which it plans to have fully covered this year. Additionally, it plans to have full coverage in the Netherlands, Switzerland, Belgium, Austria, Denmark, and Luxembourg, and about 90% coverage in England, Wales, and Sweden by year's end.

"Gigafactory" plans announced
On the heels of its earnings release, Tesla announced details about its plans to build a massive battery factory. The goal of the "Gigafactory" is to reduce Tesla's battery cell costs much faster than would otherwise be possible. By 2020, Tesla expects its factory to be able to produce more lithium-ion batteries annually than were produced worldwide in 2013, and enough to supply it with batteries to manufacture 500,000 vehicles per year. By the end of 2017, which is the first year the mass market "Gen III" vehicle will be manufactured, Tesla anticipates that the Gigafactory will have driven down the per-kWh cost of its battery pack by more than 30%.

The four states competing to house the $4 billion-$5 billion Gigafactory, which is expected to provide about 6,500 jobs, are Nevada, Arizona, New Mexico, and Texas. 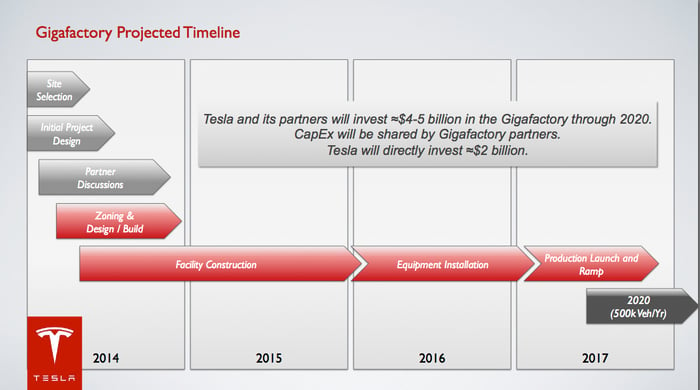 The purpose of this protection -- composed of titanium shields and aluminum deflector plates -- is to lessen the risk of fire. Last year, two Model S sedans caught fire following accidents that damaged their underbodies. These fires generated chatter that Tesla's battery packs posed a potential fire risk, and resulted in an investigation by the National Highway Traffic Safety Administration. While Tesla has vigorously defended the vehicle's safety features, and the Model S has garnered a top five-star safety rating from the NHTSA, adding this extra degree of protection was a smart thing to do to help further put consumers' minds at ease.

As a result of this development, the NHTSA is closing its investigation into the fires. It was likely going to close the investigation anyway, as it takes three similar incidents to make a determination of a "trend."

Auto dealers' attempted roadblocks are becoming mere speed bumps
Auto dealer associations across the country have long been crying foul at Tesla's direct-to-consumer sales model, as they try to protect their middleman turf. The dealers don't want changes to the laws on the books that many states have that prohibit automakers from selling directly to consumers. They fear any changes might allow major automakers to follow Tesla's lead.

Within the past couple of weeks, there's been a major thaw in the relations between Tesla and several states with respect to this issue. Some lawmakers in Texas and Arizona -- which are two of the three states that have explicitly banned Tesla from selling its vehicles at its stores -- have changed their tunes. That's surely because these two states -- alongside Nevada and New Mexico -- are competing to be the site location for Tesla's Gigafactory.

The action in New Jersey has been akin to whiplash. On March 11, the Garden State became the third state to ban Tesla, with the ban slated to become effective on April 1. Soon after, Gov. Chris Christie started backpedaling, no doubt because these bans have largely proved unpopular with the public. I'd expect a compromise is likely.

Last week, Tesla reached agreements with auto dealer lobbying groups in Ohio and New York. The Ohio compromise has already been introduced into legislation, while New York legislation is expected soon. The Ohio compromise bans automakers from selling directly to consumers, with the exception of Tesla, which is allowed to operate three retail outlets, as long as the company isn't sold and produces only EVs. Tesla has two locations in Ohio -- Columbus and Cincinnati -- with its third store expected to be in Cleveland. The New York agreement will allow Tesla to keep its five stores in the state and to add others, though the number of additional locations it's permitted wasn't disclosed.

Foolish final thoughts
Strong demand is likely to continue for Tesla's vehicles. So the key to Tesla's long-term success lies on the supply side. The company needs to be able to obtain an adequate number of batteries at a cost per battery that will enable it to profitably produce its Gen III sedan. So investors should home in on the Gigafactory progress going forward.