Now that we're finally through earnings season, I thought I'd take a step back and reflect on the energy companies that really impressed me last quarter. Overall, most of the companies I follow reported pretty solid fourth-quarter results. However, three companies really stood out in my mind and delivered impressive results. Let's take a closer look at these impressive energy stocks.

Maybe my expectations were lower than most, but I thought LINN Energy (OTC:LINEQ), and by extension LinnCo (NASDAQ: LNCO), turned in a really strong quarter. The company's production exceeded the low end of its guidance range, which was impressive considering the impacts that the rough winter had on production across the industry. Even more impressive was the fact that the company produced cash flow in excess of its distribution totaling $31.5 million. That meant its distributable cash flow was 18% higher than its distribution, which smashed its guidance of cash flow of 5%-10% above the distribution.

While investors were quick to point out that the guidance for 2014 was weak, I think the guidance is just overly conservative. We know LINN Energy is likely to use LinnCo to buy another C-Corp this year as the LinnCo led buy of Berry Petroleum demonstrated that it is a viable acquisition currency. Further, LINN Energy's strategic alternatives in the Midland Basin could unlock a lot of value and add to the company's production and cash flow if it uses it to acquire an asset better suited for LINN's MLP model. Despite all of the negativity, I think LINN Energy is heading in the right direction.

Another big step forward
SandRidge Energy (NYSE: SD) is another company that reported a solid fourth quarter. The company beat earnings expectations as production grew even as expenses fell. I really like the new management team as it continues to move the company in the right direction.

Investors have always felt SandRidge Energy had the assets in place to deliver solid results. While the Mid-Continent isn't the best oil play in America, SandRidge Energy's vast acreage position when combined with the infrastructure it built, provides it with an impressive competitive advantage over its peers. Because of this, the company has the potential to get the most out of the play to really fuel exceptional long-term results.

I felt that last quarter was another big step in the right direction for the company as it sealed a year that saw the company exceed expectations. Not only did production rise 1% more than expected, but that was achieved by spending 2% less capital than budgeted. That's a recipe for success in my book.

An absolutely stellar quarter
While I really liked the quarters of both LINN and SandRidge, the company that impressed me the most last quarter was EOG Resources (NYSE:EOG). Every number that mattered was up double digits over the previous year's fourth quarter. Oil production was up a mind-blowing 40%, non-GAAP earnings surged 45%, and discretionary cash flow jumped 29%. EOG Resources just keeps getting better, and one reason for this is because like SandRidge, it's producing more while spending less, as the following slide shows. 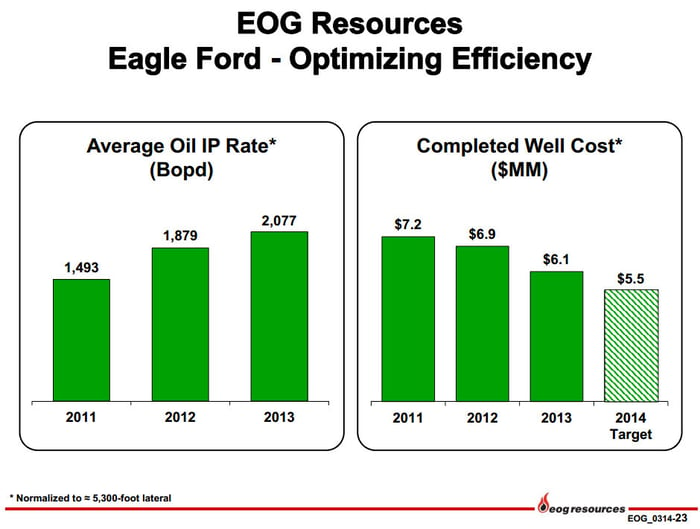 Investor takeaway
I think that America's energy boom will continue to fuel solid returns for investors in all three companies. While LINN Energy isn't a growth stock like SandRidge and EOG, its distribution should continue to grow over the long term as it executes on its plans to acquire the mature assets that energy growth stocks no longer want to own. Overall, I think investors in all three companies will do very well over the next few years as America's energy boom fuels returns.