Find out which companies got the best clinical results for the week ending March 28, 2014.

Last week was full of great news for biotechs. Idera Pharmaceuticals (IDRA 14.37%) finally had some luck with a troubled program. Clovis Oncology (CLVS -3.42%) took a big step toward treating defined populations with unmet need with a drug and diagnostic combination. Finally, Neuralstem (CUR) posted early stage data that could have enormous implications for patients recovering from stroke and other neurological damage.

Sometimes you just can't win. The market as a whole wasn't interested in the data, and continued to punish these three and the entire industry. All three companies finished the week down more than 10%. The iShares Nasdaq Biotechnology Index finished another rough week down about 7.4%.

That doesn't mean the published clinical trial data weren't important. If anything, I think it makes the companies a more attractive bargain. Let's take a look at what they found. 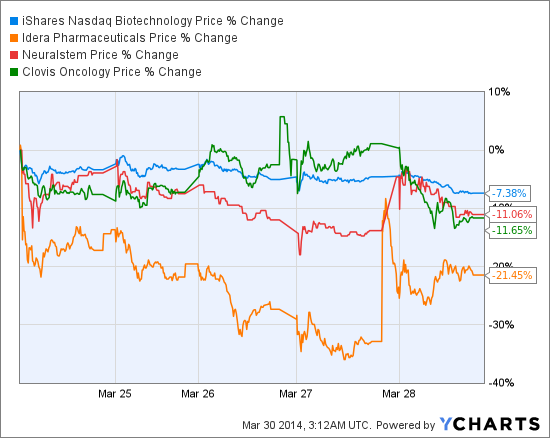 Toll road open
On Friday, shares of Idera Pharmaceuticals popped before the market opened on great news from a phase 2 safety and efficacy study. First-in-class toll-like receptor, or TLR, antagonist IMO-8400, appears to be safe and well tolerated. Investigators observed no adverse events, dose reductions, or treatment related discontinuations among the 20 psoriasis patients receiving the drug. The injections also appear anecdotally to be effective, although given the small patient population it's hard to draw conclusions.

Beyond psoriasis, preclinical models suggest IMO-8400 may be active across a variety of autoimmune diseases, and some blood cancers. With safety data in hand, Idera intends to test IMO-1400 in B-cell lymphoma patients with a specific mutation, plus other orphan autoimmune disease indications. Genetic screening for patients increases the likelihood of reaching efficacy endpoints, and faster approvals with smaller, less expensive clinical trials.

Before getting too excited, it's important to note that the company is in a tight financial position. Idera finished 2013 with just $35.6 million in cash. The odds of a partner coming along to help are slim. Both Novartis and Merck ended collaborations with Idera following the failure of earlier TLR programs.

Without a product to sell, the company's options are mostly limited to equity offerings. Outstanding shares of Idera ballooned from 27.64 million at the end of 2012, to 82.36 million on February 15, 2014.

Defined success
Last Thursday, Clovis Oncology published some promising data from the phase 1 portion of a phase 1-2 trial of its epidermal growth factor receptor (or EGFR) inhibitor, CO-1686 in lung cancer patients. The orally delivered drug should bind irreversibly to mutant forms of EGFR, so the trial included patients that progressed after treatment with previous EGFR therapies.

The results so far are encouraging. There was a 64% objective response rate in patients with the T790 mutation. It's too early to measure a median duration of response, but some heavily pre-treated patients showed progression free survival past six months.

So far CO-1686 looks like it may have some opportunity, but the data is still too limited to draw any conclusions. What I like about this program so far is that it ticks the boxes regulators like to see when considering an accelerated approval. Pretreated lung cancer patients with tumors expressing a T790 mutation represent a defined population with unmet medical need. Chances of a limited approval for the genetically screened population are good, if the company can produce more data consistent with the above results.

Clovis also develops the diagnostic tools used to screen for those patients, which makes integration easier. The company plans to file a new drug application for CO-1686 with the FDA next year, so keep your eyes open for more data.

Building up some nerve tissue
Two weeks ago, Neuralstem published results of a phase 1 trial with ALS patients. They suggest the company's proprietary NSI-566 human spinal cord stem cells can be safely transplanted in the lower half of the spine. The investigators noted that they were making progress identifying when and how often to inject the cells for maximum benefit.

The limited data seen so far is impressive. The potential for these cells may be enormous, but so are the unknowns. Investigators are pleased that the results of the phase 1 trial are consistent with the hypothesized mechanism of action, but lots of questions remain. Until we have data from a larger population of human patients, you might want to keep this one on your watchlist.

3 Biotech Stocks to Buy in March

3 Tiny Biotech Stocks That I'm Paying Attention to in 2015