Please ensure Javascript is enabled for purposes of website accessibility
Free Article Join Over 1 Million Premium Members And Get More In-Depth Stock Guidance and Research
By Isac Simon - Mar 31, 2014 at 10:13AM

While the company’s balance sheet is definitely a cause for concern, is its Utica acreage on the sweet spot?

Magnum Hunter Resources Corp.'s (NYSE: MHR) balance sheet may prove to be a hindrance to its ambitious growth plans despite natural gas prices moving north. But if state geological reports are to be believed, its core holdings may not be in the sweet spot of the Utica Shale play.

A natural gas rig in the Marcellus formation. Source: Wikipedia

Following the successful production exploits of Antero Resources Corp. ( AR 1.06% ), Magnum's decision to focus on developing its Utica and Marcellus acreage this year sounds like a solid strategy, at least on paper. But a glance through its balance sheet raises the question of whether the Houston-based Magnum Hunter has the resources to actually pull it off. At the moment, the company's balance sheet looks less than stellar.

How the company has been financing its operations
For 2014, Magnum Hunter Resources plans to spend $400 million as capital expenditure, of which 65% is allocated to developing the Utica and Marcellus shale plays. However, with only $41.7 million cash in hand and a revolving credit facility of $218 million due in 2016, meeting these expenses looks like a tall order.

Last year, cash proceeds from sale of assets came to $506 million, and to a large extent, this helped the company fund its capital expenditure of $631.5 million. This year shouldn't be much different. Management is looking forward to further divesting $400 million worth of non-core assets with sales of $69.5 million already executed in the first two months. This should definitely help. However, a delay in executing these divestitures could hurt the company's future drilling plans.

According to its annual report, among planned divestitures are properties in the southern Appalachian Basin in Kentucky and Tennessee, as well as the Canadian operations of Williston Hunter Canada, a wholly owned subsidiary of the company. But investors must keep in mind that not all these divestitures have been profitable. Last year, Magnum recognized a net loss of $44.6 million on sale of assets. This is over and above the $97 million expense in exploration and abandonment activities, thanks to expired leases on properties that the company did not choose to develop. Additionally, depreciation, depletion, and amortization costs increased almost 40% to $99 million. It seems that Magnum's acreage may not be that exciting.

A risky investment
Back in 2009, Magnum had acquired the privately held Triad Energy from going bankrupt for about $81 million. This included about 88,000 net mineral acres in Ohio, West Virginia, and Kentucky. Approximately, 47,000 net acres cover the Marcellus Shale play that is now a part of the company's core acreage holding.

However, compared to the likes of the Bakken and the Eagle Ford, the Utica is still far from being a prolific oil and gas play. While the latter has seemingly garnered a lot of attention as America's next hottest shale play, it is yet to witness high-volume producing wells on a consistent basis. According to various reports, the Utica shale's "sweet spot" is turning out to be smaller than initially thought, and the oil-rich window is concentrated in a narrow belt. The question is: Does Magnum's acreage fall in that sweet spot?

According to a former chief geologist from Ohio Department of Natural Resources, Larry Wickstrom, the real hot spot on the play could be more to the south than originally thought. According to him, the narrow belt runs from Carroll County in the north, moving down to Harrison County, followed by a little of Guernsey in the east, and down into Noble County. He additionally mentions that Monroe, Jefferson, and Belmont counties are potentially rich in dry gas. The following chart from the Ohio DNR gives a clear picture: 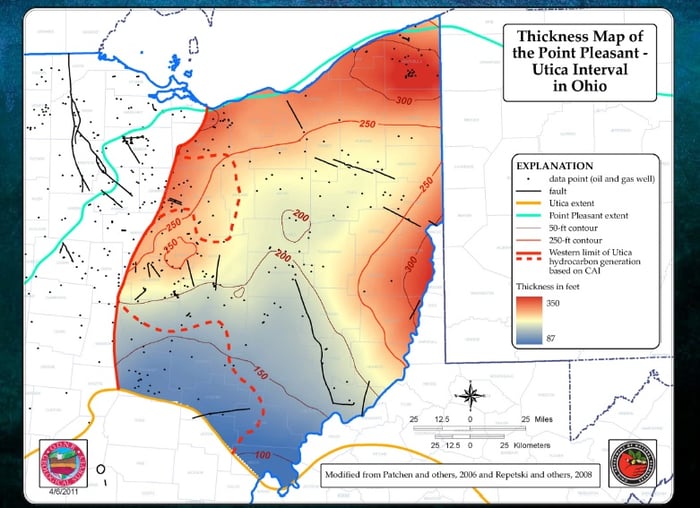 So where does Magnum Hunter stand? Most of the company's holdings are further south -- in the Noble and Washington counties. However, its Monroe county acreage has shown promise. In February, the Stalder wells (in Monroe County) have tested to a peak rate of 32.5 million cubic feet per day, or Mmcf/d, of natural gas. In the month of March, the company is anticipating a net incremental production of 6,000 to 8,000 barrels of oil equivalent per day, or Boe/d.

Of course, Utica's sweet spot could be extending further south than already anticipated. Until a consistent production pattern is established, the current inferences are still nothing more than "educated guesses." However, the next 12 months should most probably bring a confirmation.

A Foolish takeaway
While the latest update on production increment is a positive development, it's still a long way from Magnum's targeted exit production of 35,000 Boe/d for 2014. The targeted divestures must soon take place in order to meet working capital requirements. But most importantly, as production and sales volumes grow, management must address its balance sheet concerns.