At first glance, Bank of America (NYSE:BAC) and PNC (NYSE:PNC) couldn't be any more different than Starbucks (NASDAQ:SBUX). But it turns out Bank of America, PNC, and all the other banks have a few things to learn from the beloved retailer.

The remarkable shift
Just last week, Starbucks confirmed it would begin the roll out of the sale of alcohol and light bites to thousands of its stores within the coming years. In an interview with Bloomberg the chief operating officer, Troy Alstead, said simply, "We've tested it long enough in enough markets -- this is a program that works."

At first glance, it may seem like a coffee house moving to serve alcohol would have nothing to do with any change a bank could make, but that's not true.

The minor change for banks
Before diving into how banks could successfully mimic Starbucks shifting to serving alcohol, consider for a moment Starbucks mobile payments now make for more than 14% of its total transactions in the United States -- seeing more than five million a week.

The CEO of Starbucks, Howard Schultz recently told CNBC, "We have an amazing, stunning opportunity within mobile payment and social digital media," and the company may begin to explore using its mobile payment technology outside of its own stores. While this may terrify the banks, it should in fact be something the banks seek to mimic.

One of the reasons Starbucks has been so successful in the mobile payments world is both the ease of use, and the benefits provided to its customers. In the same way, banks must seek to ensure their own mobile apps are crafted in such a way to both meet the needs of customers and reward them. 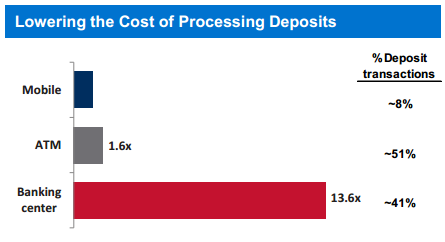 When you consider Bank of America noted a deposit accepted in a branch costs almost 14 times more than one made on a phone, it too would do well to reward its customers for more use of its mobile apps.

In addition, a bank like PNC would do wildly well to emulate the strategy of Starbucks -- and even Bank of America -- as it noted in 2013 75% of its deposit transactions were made at branch, and just 20% were made through ATMs, with the remainder on mobile.

While this is an improvement from the 84% of deposits made at branches in 2012, it represents how wide of a disparity there can be among the banks and how they interact with their customers.

The major change
Beyond mobile transactions however, banks too must take careful note of the reason behind Starbucks decision to begin serving alcohol to its customers. Alstead noted the reason behind this was when, "we bring the evening program to stores, there's a meaningful increase in sales during that time of the day."

In the same way, banks too must look to bring in more ways to developer deeper relationships with customers. These will ultimately bring in more revenue. This is why "cross-sale" has become such a buzzword in the industry, because multiple relationships make customers both more loyal and more profitable.

This helps explain why PNC grew its investment professionals by 20% in its retail banking network, and a bank like Huntington is compelling because nearly 80% of its customers have more than four banking products with it.

Bank of America revealed when a customer goes from simply having a checking account with the bank to considering Bank of America as their primary bank, obtaining a loan, and also using its investing services, the average revenue jumps nine times, from $340 per household to $3,000.

Put simply, in the same way, Starbucks will draw in more revenue by providing more expansive selection, banks too must seek to offer more products and services to their customers to deepen relationships and increase income.

The bottom line
Starbucks has not been without its own set of difficulties, as in the span of six months in 2008 and 2009 it announced would shutter the doors of 900 locations in the U.S. But the company ultimately recovered as it refined its empire and has seen its stock rise by more than 500% over the last five years.

Similarly, many banks -- like Bank of America -- grew too quickly, were met with great turmoil in the financial crisis, and are just now on the road to recovery.

But if the banks can follow the lead of Starbucks and extend their capabilities to facilitate loyal customer relationships, ultimately both the banks' customers and investors will be delighted. Just like those at Starbucks have.