Every year, theater owners descend on Las Vegas for CinemaCon in much the same way gamers do on Los Angeles for E3 and geek culture does on San Diego for Comic Con. While CinemaCon may not be as well-known as those other conventions, it is still a big event that paints a vivid picture about the future of film and the overall cinematic experience.

3D declining
In addition to every major studio screening never-before-seen footage and trotting out A-lister after A-lister, the annual convention is a time to look back at what's worked and what hasn't in the industry overall.

Perhaps the biggest takeaway was that 3D's not the golden child everybody thought it would be. For every film like Gravity that should without a doubt be in 3D, there are dozens of others that have no business being shown in the third dimension. In fact, according to a study released during the conference, only 27% of theatergoers on average opted for the 3D version of a film in the States. That's down from the over 45% that went for the premium option during the Avatar-infused 3D boom of 2010.

One thing to remember is that 3D plays incredibly well overseas. Foreign audiences can't get enough of the technology, so until that interest wanes it's not going to change anything. Check out the below grid compiled by Deadline.com for a deeper look at those results. 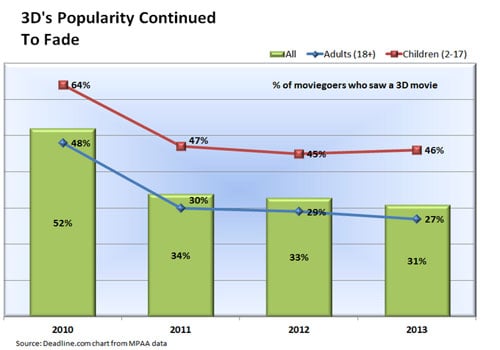 What's so funny about this is that studios haven't even mastered 3D yet, and now executives are ready to move onto 4D with the first of those commercial theaters aiming to be ready in Los Angeles this July. The studios are missing the point entirely. Audiences aren't passing on in-theater enhancements because they aren't immersive enough; they are passing because it costs too much and is distracting from the actual film.

Still, 4D's not the only thing coming. During the show exhibitors were treated to new presentations about the rise of laser projection systems and enhanced audio. In addition, vendors are working on adding side screens to bring audiences further into the action. These are all novelties that theme parks have used for years, and they work well there because they play to tourists and families on vacation ... not your average moviegoer who doesn't want to go bankrupt and deaf while taking the family to the movies.

Incentives
Overall domestic sales are down just a tad from 2012 to 2013, which honestly isn't that alarming for reasons I'll get into later. What is troubling is the demographic that has declined. Young adults age 12-24 have begun going to the movies less often, with drops of 15% for ages 12-17 and a more troubling 21% decline with the 18-24 crowd.

Caucasian moviegoers are also going less often as well, with just 54% of all tickets attributed to their demo and that number dropping below 50% when factoring in repeat business. African-American attendance leaped 13%, however, thanks to strong year of urban films. Hispanic audiences are the most likely ethic group to buy tickets overall.

Now to keep those viewers coming and help win back others they've lost, movie chains like AMC (NYSE:AMC), Regal (NYSE: RGC), and Loews (NYSE:L) have started discussing plans that they hope will work. These range from adding more family-friendly pics for younger audiences (after seeing 2014 films The Nut Job and The Lego Movie do so well) to ramping up on blockbusters to lure in the older side of the spectrum.

Theaters are also looking at instituting a weekly discount night to draw in more cost-conscious crowds. In addition, Screenvision, the company behind many of those pre-show presentations, is expected to revamp its shows in an attempt to be more modern and add in more mainstream content.

The most controversial plan though is sure to be adding more alcoholic options for adult moviegoers. Theaters make most of their money off of concessions, so owners are all for it. They aren't dumb, however, and know the issues associated with that play.

As with anything, there will be ebbs and flows in the theater business. Last year may not have been the most dynamic year ever, but like this year it's also not going to be the worst. This summer's slate, for example, includes one of the best August lineups in recent years with the Teenage Mutant Ninja Turtles reboot, Sin City sequel, and third Expendables film keeping the back half of the summer season very interesting.

Analysts know that if handled right, next year could be a field day for exhibitors. Check out the roster: The Avengers, Star Wars, and Jurassic Park will all make cinematic returns, as will super spy James Bond and a new entry to the Jason Bourne franchise. That's not even counting all the animated fare coming to town, including two releases from Pixar.

The reason why the slight decline I mention earlier doesn't matter is that 2014 has already proven it will surprise. There are enough franchise hits and potential sleepers in the mix that theaters should be able to at least keep the status quo until the first of 2015 blockbusters start to unspool.

Overall, things are looking up. Yes, it's true that the film industry is not in its golden age anymore, that's clear. However it's not all doom and gloom. If long-term projections hold, studios are going to break the bank next year; the trick is going to be making sure they don't break consumer's wallets (and spirits) in the meantime.

At least owners recognize they need to make changes and are willing to discuss options. Now's the right time to experiment because next year will be here quicker than you think. Like the latest installment of a certain car franchise, the releases will be coming fast and furious.