Google's (NASDAQ:GOOGL) Android operating system has already passed Microsoft's (NASDAQ:MSFT) Windows in regard to the number of installed devices. Projections now show that the relatively young OS will soon be on more devices than every other PC and mobile operating system put together. 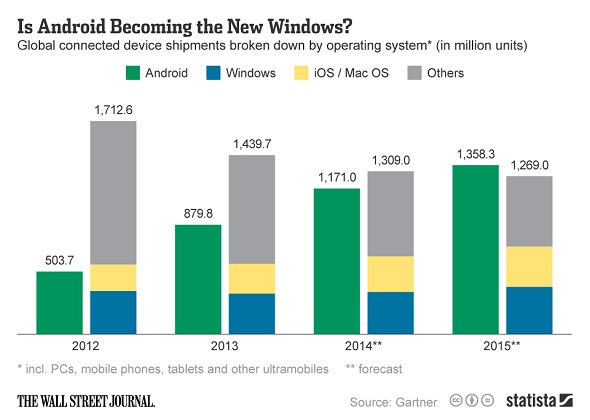 As you can see from the chart, Android already accounts for more than twice as many connected devices as Windows and has an even greater lead on Apple's (NASDAQ:AAPL) iOS. If the forecasts are to be believed, not only will Android continue gaining users, it will also surpass all other operating systems in 2015. Those gains won't come at the hands of iOS, however, which Gartner forecasts as growing. They won't even come from Windows, which looks to have slight growth in both 2014 and 2015. The big leap for Android will be from the declining "other" category, which includes what are often knows as "dumbphones." In 2012, 1.75 billion mobile phones were shipped; of these, Gartner reported that only 680 million were smartphones. Smartphone sales only passed dumbphone sales in 2013.

Why does this matter?
Google does not charge companies that install Android on their devices a fee for using the software. Microsoft does charge for Windows, and Apple does not license iOS to third parties. There are two types of Android partners, according to 9to5Google.com: those "on the Android Open Source Project that allows OEMs to freely use Android on their devices, and the closed Google Mobile Services, which gives access to Google Play services and Google branded apps like Maps and Gmail for manufacturers that agree to various guidelines."

Just because Android is free does not mean that it's not a moneymaker for Google. Every installed copy of Android gives Google potential customers for its wide array of services. That's especially true for Google Mobile Services partners, which put the company's app store and branded products front and center. By giving away Android for free, Google has other companies working hard to sell people devices that Google will have the opportunity to profit off of.

Are there too many versions of Android?
Having a huge installed user base for Android makes developers want to build apps for the platform, but Android does have a fragmentation problem. Android developers must build for a very wide range of screen sizes and processing power levels. They must also deal with the fact that there are many different versions of Android and a number of device manufacturers layer their own user interface on top of Android. This "often makes it impossible for users to get future Android updates," wrote Statista's Felix Richter. "As a result, adoption of the latest version of Android has traditionally been slow." 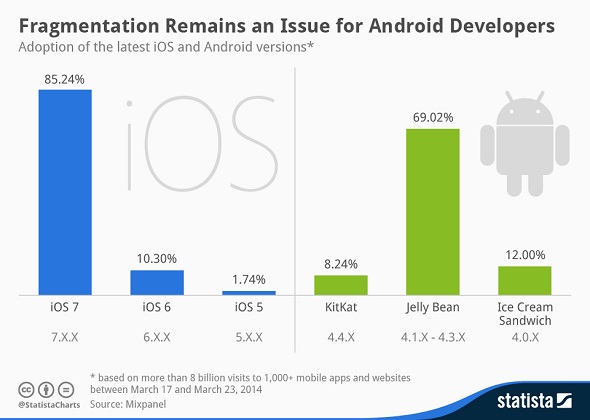 Google has also not been successful in getting users to update to the latest version of Android -- dubbed KitKat -- which has further challenged developers. The new Android was designed to be more compatible with low-end devices in order to get it to more devices quicker. Currently less than 10% of Android devices are running KitKat, which was released in October 2013, Statista reported. Apple's iOS 7, released in late September, has been adopted by 85% of iOS users and even iOS 7.1, released as recently as March, has a significantly higher adoption rate (42.77%) than Android KitKat.

Microsoft has had similar problems getting customers to adopt its Windows 8 platform, but that is decidedly less relevant as most mass-market Windows-based software works across versions of Windows that go as far back as the 12-year-old Windows XP. Only Windows 8 uses apps, however, so people developing for that platform don't have to worry about backwards compatibility.

Being open source has been a boon for Android as companies like Amazon use customized versions of it, leading to the OS spreading quickly. It has also been a negative, however, as the customization creates development challenges. Still, because Android has so many users, each of its three major versions offers a wealth of users for developers to target.

One Android to rule them all
Apple has made updates to its operating systems -- specifically its iOS for phones and tablets -- an event that customers look forward to. New updates usually mean new features, and that also drives people to want to make the move. Apple has also made the actual update process as easy as pushing a button, so it's painless for customers.

Android would be benefit from eventually moving to a method where it can create that kind of buzz for new iterations of the operating system. That won't apply to the customized versions that are out there, but it should be applied to the main OS. That's a challenge, since if Google wants to keep the OS viable for low-end devices it probably can't add fancy bells and whistles. Still, the company should tie updates into improvements to its products (like Google Maps) and make access to those improvements part of that. That would entice customers to update and give developers a clear idea as to which platform they should be targeting.

Android already has the most users. If Google can bring its user base onto one platform, then its ability to get developers excited and to make even more money grows exponentially.