In the world of utility electricity generation, natural gas is one of solar's biggest competitors. America's low natural gas prices have been a challenge for solar as many utilities prefer to stick with established fossil fuels. Now refiners like Valero (NYSE:VLO) are taking advantage of cheap U.S. natural gas, putting upward pressure on natural gas prices and making solar more attractive. 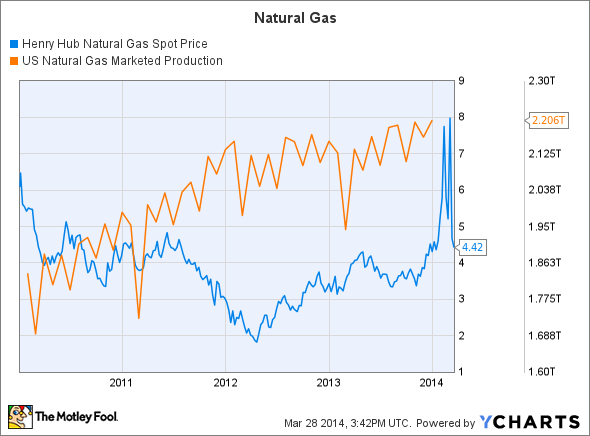 Slowly the refinery industry is catching up. By using cheap natural gas to help refine high-value exportable products Valero and Marathon Petroleum (NYSE:MPC) are taking advantage of their U.S. presence.

Valero's Saint Charles hydrocracker is specifically designed to take cheap U.S. natural gas and produce high value distillate exports. In 2013 Valero's average gasoline margin was $4 per barrel while its average diesel (a distillate) margin was $16 per barrel. By switching over to these high-demand products Valero is able to increase margins and profits.

Marathon Petroleum is not going to be left in the dust. Right now it is evaluating a resid hydrocracker project at its Garyville facility. The $2.2 billion to $2.5 billion project would see a start-up date around 2018 with an estimated ROI from 20% to 25% and an EBITDA from $0.8 billion to $1 billion. Marathon has a number of other hydrocracker expansions coming online between 2014 and 2015 that are expected to produce ROIs in the 20% to 70% range -- good numbers for any refinery.

The big picture
According to 2013 numbers Valero has $47 billion in assets and Marathon has $28 billion in assets. Their current respective ROIs are 10.6% and 14.9%. This means that two or three $2 billion hydrocrackers are too small to boost these firms' ROIs by a significant amount, but they are still a push in the right direction.

The big solar utility seller First Solar (NASDAQ:FSLR) is first in line to benefit from rising natural gas prices. Competition in the utility market has heated up, and in 2013 First Solar's net sales actually fell by 2%. From 2012 to 2013 its expected module shipments barely increased from 2.6 GW to 2.7 GW.

SunPower (NASDAQ:SPWR) is more diversified. Its quality warranties and high efficiencies make it a great fit for the rooftop market. Still, utility sales are an important part of SunPower's pie. In Q4 2014 the company stated that just 40% of its sales come from residential and commercial systems.

It is against this backdrop that continued improvements in solar pricing and efficiencies are expected to push up SunPower's earnings per share (EPS) 33.2% from 2014 to 2015. First Solar on the other hand is expected to see an EPS growth rate around 99%. These numbers are optimistic, but rising natural gas prices and R&D advances do help the bottom line.