Set-top box smackdown
Based on its price and features alone, Fire TV clearly outclasses its three closest competitors -- the Apple TV, the Roku 3, and the Chromecast -- by a wide margin: 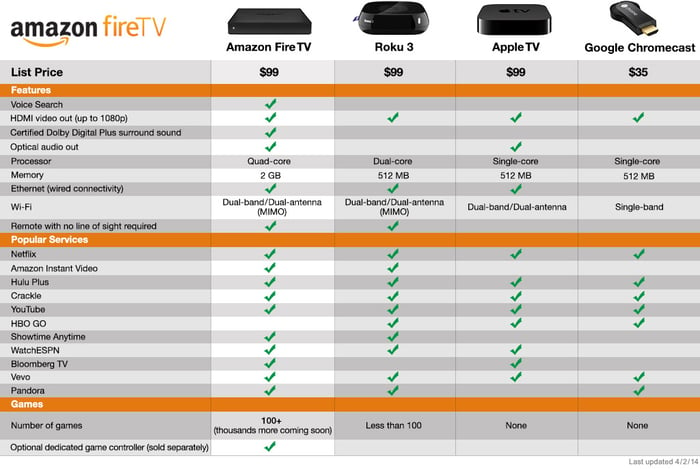 Amazon's strengths are obvious. It has a much faster processor (2GB quad-core) than all three competitors, and offers an impressive selection of popular streaming services. The only main service that Fire TV notably lacks is Time Warner's (NYSE: TWX) HBO Go, which is available on all three competing platforms. The Fire TV also boasts a Bluetooth remote with voice search capabilities and Dolby Surround Sound.

Amazon states that the Fire TV can play over 100 games, with "thousands more coming soon"-- compared to Roku's sparse library of fewer than 100 games and the complete lack of games for Apple TV and Chromecast. To play these games, Amazon is selling a dedicated video game controller for an additional $40, which comes with 1,000 free Amazon coins to purchase games.

The Kindle Fire strategy redux
Amazon has established that the Fire TV offers the most bang for the buck among its competitors, but can it really make a dent in this maturing market? Apple TV currently dominates 43% of the U.S. streaming device market, according to Business Insider. Roku comes in second with a 24% share, followed by Chromecast's 14%.

Amazon is betting that its 20 million-plus Prime Members, who pay $99 per year, will jump at a chance to stream their favorite TV shows and movies on a TV rather than a computer, smartphone, or tablet. Amazon's video library of 200,000 shows and movies is comparable to the size of Apple iTunes or Google Play, but Amazon offers "all you can view" access instead of charging customers per viewing. That business model makes Amazon a huge threat to Netflix, which costs $96 per year. For $3 more, Amazon offers its customers free two-day shipping on select purchases and permission to borrow best-selling books for the Kindle -- perks that Netflix can't offer.

Amazon Instant Videos can be streamed on Microsoft's (NASDAQ:MSFT) Xbox One and Sony's (NYSE: SNE) PS4, but Amazon believes that the Fire TV will appeal to customers who don't want to pay $400 to $500 for a new console -- the same customers who bought the cheaper Kindle Fire instead of an iPad. 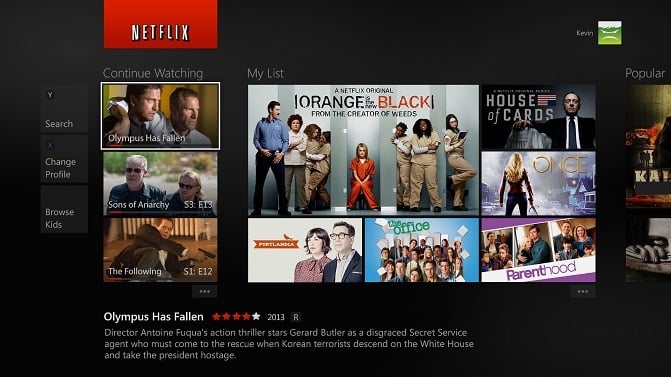 Microsoft's "double charge" for Netflix for the Xbox One is highly unpopular. (Source: Xbox.com)

The Fire TV, like the Kindle Fire, will likely be sold at a loss to keep users locked into its ecosystem. That bold plan worked beautifully with the Kindle Fire -- the average Kindle owner now spends $443 more per year than an Amazon user who does not own one, according to Consumer Intelligence Research Partners.

Great for videos, not so great for video games
Whereas Fire TV has a great price point, powerful specs, and an impressive strategy to disrupt its rivals in terms of video, it's a lot less impressive when it comes to gaming. Fire TV, like the Kindle Fire tablets, runs on forked Android, and Android console gaming is an idea that has fallen flat in previous attempts.

The Ouya, which also cost $99, was an ambitious attempt at bringing smartphone and tablet games to the TV. Three lucrative ideas helped the company raise $8.5 million on Kickstarter:

Several other companies believed in that idea so much that they also launched Android consoles of their own. Mad Catz launched the M.O.J.O., which cost $200. Nvidia (NASDAQ: NVDA) released Shield, a handheld Android console that cost a pricey $299. These consoles all failed to expand very far beyond a niche group of gamers who liked to play Android games with physical controllers. Three big reasons made Android console gaming impractical:

Yet Amazon is convinced that it can succeed where those companies failed. The company has stated that prolific publishers like Disney (NYSE: DIS), Gameloft, Take-Two's (NASDAQ: TTWO) 2K, Ubisoft (NASDAQOTH: UBSFF), and Double Fine are all on board. The Fire TV's optional controller will be used for some games, but won't be required -- games can also be played via the remote control or on the second screen of a companion mobile app.

It's a slightly more promising idea than Ouya, M.O.J.O., or Shield, but it's still not likely to appeal to the mainstream console gaming crowd, which buys full-featured titles on the Xbox One, PS4, or Wii U. Amazon doesn't seem to be pursuing that market anyway -- the company has stated that the average price per paid game will be a mere $1.85.

My fiery takeaway
In conclusion, the Fire TV looks like a great leap forward for Amazon. It looks poised to repeat its Kindle Fire strategy on set-top boxes, and its massive ecosystem of loyal Prime users could quickly make it a market leader in streaming video. In terms of video games, Fire TV probably won't fare much better than Ouya, but it's still a nice bonus option for the set-top box.