The Dow Jones Industrial Average (DJINDICES:^DJI) is slipping today, led downward by Visa (NYSE:V), which is having an outsize effect on the index due to its $209 share price (Dow components are weighted somewhat arbitrarily by stock price). The S&P 500 (SNPINDEX:^SPX) has fallen from its highs today, losing a substantial 0.85%.

Visa is down 3% today after numerous pieces of bad news. Earlier this week Wal-Mart (NYSE:WMT) sued Visa over what it believes to be the illegal price fixing of swipe fees. Wal-Mart alleges $5 billion in damages, and because this is an antitrust case, if Wal-Mart wins it may be able to claim a penalty of three times that amount. In December, MasterCard and Visa settled a case with retailers for $7.5 billion in damages over the same allegations, but Wal-Mart, among others, opted out of the settlement in order to pursue their own suits. The first case took seven years to settle, and this one will likely take years as well.

Second, today Wal-Mart announced that it will switch its branded cards from Discover to MasterCard. This is a win for MasterCard and a missed opportunity for Visa, as Wal-Mart is the largest retailer in the U.S. 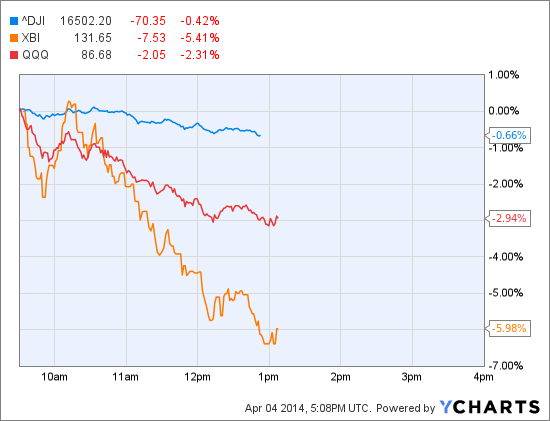 The Nasdaq 100 is being led down by Microsoft, Apple, and Google, which together make up 28% of the Nasdaq 100.