Investors love stocks that consistently beat the Street without getting ahead of their fundamentals and risking a meltdown. The best stocks offer sustainable market-beating gains, with robust and improving financial metrics that support strong price growth. Does International Business Machines Corp. (NYSE:IBM) fit the bill? Let's look at what its recent results tell us about its potential for future gains.

What we're looking for
The graphs you're about to see tell IBM's story, and we'll be grading the quality of that story in several ways:

What the numbers tell you
Now, let's look at IBM's key statistics: 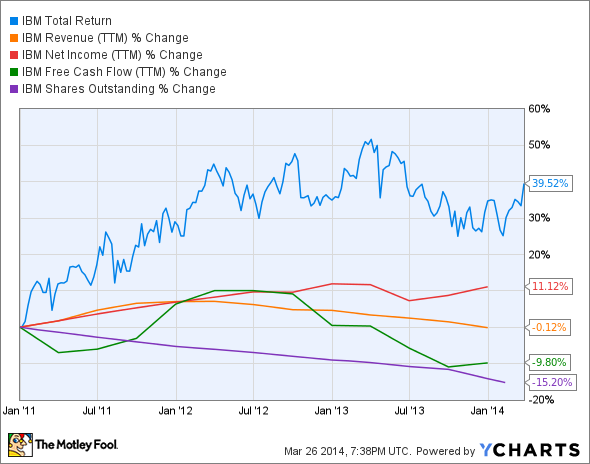 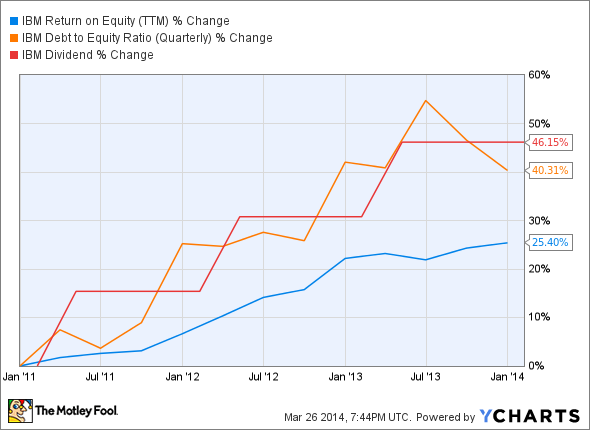 How we got here and where we're going
IBM puts together a rather strong performance for such a large and well-established company by earning six out of nine possible passing grades. The biggest worry appears to be IBM's declining free cash flow, but flat revenue is also a concern despite the company's Herculean streamlining and buyback efforts, which have juiced bottom-line growth over the past few years. The company did raise substantial new debts to support its buybacks, which undermined it on the debt-to-equity assessment. How can IBM return to real growth? Let's dig a little deeper to find out.

IBM has been aggressively moving away from its traditional hardware segments in recent years to become a leader in cloud computing and business analytics. IBM recently sold its x86 server business to Lenovo, which depicts strong commitment to its cloud computing business. Fool contributor Chris Neiger notes that IBM has already completed about 15 cloud-focused acquisitions for a total of roughly $7 billion. According to IBM, the global cloud-computing industry is expected to be worth $250 billion by 2015, which bodes well for IBM's BlueMix platform, a cloud-based development tool. The company also plans to build 15 new data centers at a cost of $1.2 billion, which is expected to generate more than $7 billion in revenue by 2015. However, the company is already facing cutthroat competition from well-established cloud-computing players, most notably salesforce.com, Microsoft (NASDAQ:MSFT), Amazon.com, and Google.

IBM's also a big player in "big data," and according to IDC, total spending on big data technologies and services will increase by 30% this year over 2013, and more than a quarter all global applications will be moved to cloud over the next two years. Fool contributor Mark Girland notes that Microsoft recently announced its plans to utilize cloud-based networks to create smarter cities, while Intel (NASDAQ:INTC) introduced its Intel Cloud Technology program, which will allow customers to compare a wide variety of cloud-based technologies and services -- in essence, creating a one-stop-shop for the world's major cloud offerings. Cisco (NASDAQ:CSCO) will also be a major cloud player, as it's investing $1 billion to create Cisco Cloud Services to compete in this crowded field. Meanwhile, IBM continues to emphasize market penetration in emerging countries around the world, especially in the BRIC nations, which could be its leg up over less geographically diverse rivals. The company also signed a deal with Pitney Bowes (NYSE:PBI) to integrate IBM's cloud applications with latter's location services.

IBM also has high hopes for its Watson artificial intelligence suite, which first gained worldwide fame by trouncing the best human players to ever compete on the Jeopardy quiz-game show. Watson has since been adapted to medical uses, and its latest deployment is into financial services, where it's able to comprehend millions of pages of financial data in seconds while simultaneously parsing conversational data, including customer queries. IBM's Watson Group recently inked a partnership with Singapore-based DBS Bank, the country's largest, which is scheduled to begin in the second half of this year. Fool contributor Jessica Alling notes that Watson and the other software-based planners could offer greater potential upside for and encourage greater participation from the Millennial generation, which is still in the early stages of building its wealth.

Putting the pieces together
Today, IBM has some of the qualities that make up a great stock, but no stock is truly perfect. Digging deeper can help you uncover the answers you need to make a great buy -- or to stay away from a stock that's going nowhere.