Please ensure Javascript is enabled for purposes of website accessibility
Log In Help Join The Motley Fool
Free Article Join Over 1 Million Premium Members And Get More In-Depth Stock Guidance and Research
By Jessica Alling - Apr 5, 2014 at 7:00AM

With the potential for massive exposure through social networking bringing more and more companies to the table, these companies have proven to be the best at using the new way to interact with their customers.

Any way that a company can increase its exposure to potential customers is a good thing, right? Well, the surge in corporate participation in social networking has proved that the likes of Twitter and Facebook are prime spots for making a good impression on the masses. Here is a list of four top companies that are killing it with social networking.

1. Taco Bell
Often the butt of jokes, the Yum! Brands (YUM 1.86%) chain has turned the tides, using its Twitter account as a witty and enjoyable tool for engaging with its customers and haters. By quickly responding to customer jibes and rants, Taco Bell is able to ensure customer enjoyment inside and outside their restaurants.

This Valentine's Day, Taco Bell sent some of its followers presents:

It's also keen on giving some good advice:

And with its new breakfast menu, Taco Bell's feed has proved very valuable in shoring up consumer interest for its March 27 launch:

But it's not all fun and games; Taco Bell customers have also found the chain's Twitter feed as a helpful outlet for serious complaints. And Taco Bell is just as quick to respond: 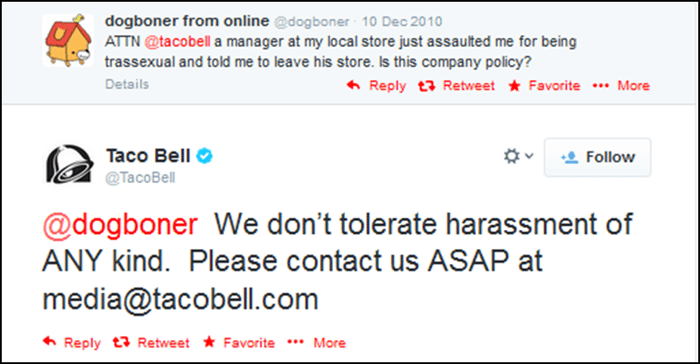 2. Procter & Gamble
Some of the most boring products are the ones you need every day. But the brains behind Procter & Gamble's (PG 1.44%) various brands marketing have found their stride, making memorable commercials and quick-witted social networking accounts.

Whether you like the animated bears touting the softness of P&G's Charmin brand, most readers of the personal care company's Twitter feed can get behind the comedy inherent in bathroom humor.

The toilet paper purveyor was also quick to jump on the chance to make an enormously popular pun when Thor: The Dark World was released last year:

Though the tweet was a big hit, the company quickly deleted the post -- possibly after rethinking the underlying message, or perhaps spurring on the chatter surrounding the post.

Along with its viral video commercials, P&G's Old Spice brand is also a keen player in the Twittersphere. The company was one of the first to really capitalize on social networking with its introduction of the "shirtless Old Spice guy" and his personalized YouTube responses to questions that stemmed from the recent introduction of his popular TV commercials in mid-2010. By collecting questions from various sources (Twitter, Reddit, etc.) the company got celebrities involved, who then told all of their Twitter followers as well.

3. Delta
Though airlines may open themselves up to huge backlashes from complaining customers, Delta Air Lines (DAL 5.55%) isn't afraid of putting itself out there. Here's one of the airline's best posts:

4. Clorox
Though the offering from The Clorox Company (CLX 0.46%) doesn't fall within the typical social networking environment that other companies are using, its latest offering to customers is particularly interesting. Aimed at young consumers, Clorox's "Sock-It" app allows a user to broadcast an alert to others using the app (preferably your roommate) that you're indisposed and would like some privacy. Think college dorms with socks on the doorknobs.

While it's somewhat unnerving that Clorox is interested in the private activities of young persons, either college students or young professionals, it's clear that there was a lighthearted attempt to connect a funny (and often embarrassing experience) with the boring tedium of laundry. Just hope the app's users remember to wash those socks when they're done.

Why social media matters
Technology is allowing a broader range of consumers to air their grievances and favorites, making the social media presence of any major brand more important. While many companies find Twitter and other social networking platforms as suitable outlets to broadcast productions or promotions, the best companies interact with their followers.

By making light of their products or services, the companies listed above show their fans and foes that they're comfortable with connecting to the broad swath of consumers who use social media. Though their posts may be light and witty, being a great social media participant is a serious advantage.