GameStop (NYSE:GME) has an interesting problem on its hands: It's selling too much brand-new -- and expensive -- stuff. After an almost two-year siesta, video-game fans are back to spending with a vengeance. In fact, people are buying new consoles released by Microsoft and Sony at such a fast pace that it's sucking the air out of the rest of the market.

The problem
To see this phenomenon in action, look no further than GameStop's latest business results. Powered by record launches for the Xbox One and PlayStation 4, hardware sales spiked higher by 100% over the holidays last year. That's great news for GameStop, especially since it managed to increase its market share to a record high.

However, that success came with a big drawback. Sales of new software titles for prior-generation consoles plummeted by 22% over the same period, suggesting that gamers were depleting their budgets on the $400 and $500 consoles, leaving little room for other purchases. And this shift in spending has resulted in a major reordering of GameStop's sales mix: Software sales tanked to 33% of revenue last quarter, as compared with 45% in the same period of 2012. 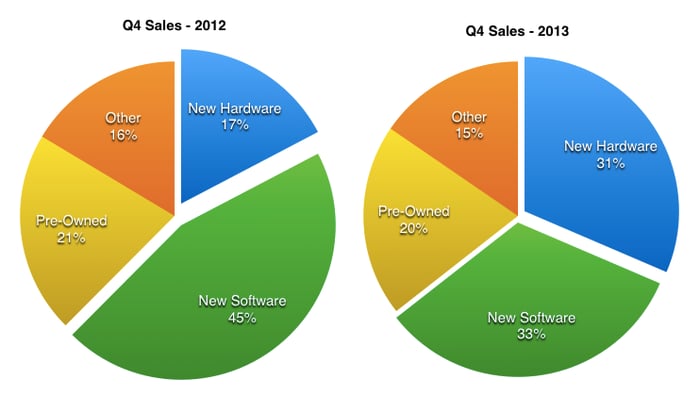 The problem for GameStop is that consoles are much less profitable than every other product that it offers. The company logged an 11% profit margin on console device sales last quarter, which was less than half the margin it got from new software sales and just one quarter of the profitability it registered in its lucrative used video-game division.

That profit swing goes a long way toward explaining why GameStop missed its latest earnings forecast despite clocking a strong revenue boost. Sure, comparable-store sales rose by an impressive 8% last quarter, but earnings fell by 14% thanks to the unfavorable product mix.

The answer
A good portion of this issue will actually solve itself over time as the next-gen consoles mature, and as more titles come out for the devices. A deeper used and new video-game market will develop soon enough for the Xbox One and PS4, and GameStop can then expect to return to its usual, more profitable sales mix. But the company also aims to help that process along by making a push into the market for cheaper video games.

The category for games priced at $20 and below, as opposed to $60 for big-name blockbusters, was worth $400 million in sales last year. That's an enticing category, considering GameStop's total video game revenue in 2013 was $3.8 billion. However, to protect its massive profit margins on pre-owned games, the retailer has left that market mostly to competitors. While GameStop dominates used and new video game retailing overall, its market share is much lower in the value category.

Foolish bottom line
Entering that market should give the company a healthy sales boost, on the order of a few percentage points of revenue. Still, investors should expect a trade off in slightly lower profitability going forward.

By GameStop's estimates, its pre-owned game margins will be pulled down by the addition of value offerings, falling to roughly 45%, as compared with the 48% it has enjoyed until now. That's still a very profitable business model. And its likely a worthwhile trade if it grows the overall sales pie and gives the company the opportunity to sell more games in addition to those popular console devices.