If there's a phrase that's been used to get the hopes of Intel (NASDAQ:INTC) investors up over the past several years, it's been "back to school." But over the past two years, the "back-to-school rush" hasn't materialized. While Intel's lower end Bay Trail-M chips for low-cost PCs should ramp nicely for system availability during the back-to-school season of August and September, thus solving Intel's key issue in PCs, it looks as though Intel's first 14-nanometer Core processors, codenamed Broadwell, for higher-end systems will completely miss the back-to-school period.

Back to school? Not for Broadwell.
To successfully launch a chip, Intel needs to build enough of them to support a mass launch of systems based on the new chip. What happens if the system vendors launch these brand-new shiny systems with the latest fifth-generation core processor, only to end up supply constrained, especially after clearing out prior-generation inventory at a discount?

So with Broadwell shipping "by the end of the year," according to Kirk Skaugen, GM of the PC Client Group at Intel, at his Intel Developer Forum 2014 keynote in Shenzhen, China, it's clear that Broadwell misses the back-to-school selling season. While this seems like bad news, it's actually a good thing. 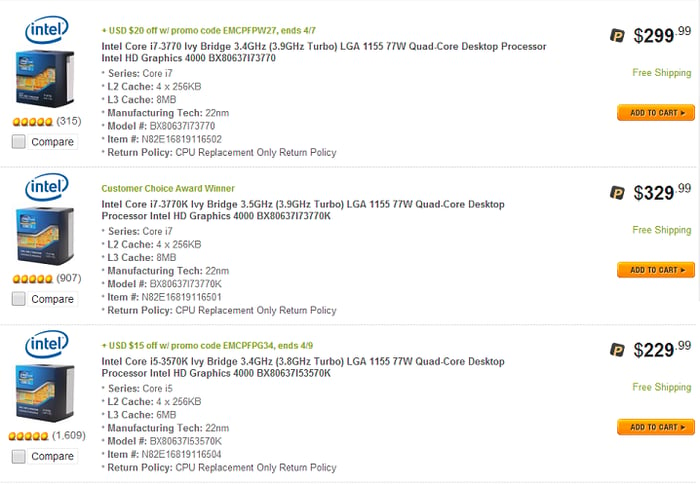 The channels are filled with Ivy Bridge just waiting to be sold. Source: Newegg.com.

Before PC sales fell off a cliff back in 2012, the pattern was as follows:

To illustrate the point, Intel's older-generation Sandy Bridge products, shown below, are priced meaningfully higher than either the socket-compatible Ivy Bridge or the newer Haswell products that occupy similar spots in Intel's product stack.

It seems likely, then, that the channel is full of Ivy Bridge inventory. While this problem was easy to illustrate with the boxed desktop processors, it's even more pronounced with many budget and mid-range notebooks -- not coincidentally, where the weakness in notebooks is. With Ivy Bridge still clogging the channel and with Haswell and Bay Trail-M ramping, it's unlikely that the PC market would particularly care about yet another CPU launch at the moment.

14-nanometer yields: Intel can take its sweet time
Intel's definition of "ready for volume production" for a given process is when the lead product is yielding at a sufficiently high rate so as to run the wafers. If Intel were desperate to get product out faster, it would simply eat the bad yields until it got yields under control. However, given the limited competition in the PC market from rival Advanced Micro Devices (NASDAQ:AMD), which has yet to catch up with the power efficiency of Intel's Ivy Bridge, let alone Haswell, what incentive does Intel have to launch new products until the 14-nanometer process has exceptional yields?

Indeed, given that Intel is launching a mid-year "Haswell refresh" for desktops, and the fact that Haswell-based Ultrabooks didn't appear en masse for last year's back-to-school selling season (outside of the MacBook Air and the Sony Vaio Pro 13), Intel can probably get by just fine using Haswell during the back-to-school season.

The only exception, of course, is Apple (NASDAQ:AAPL), which is probably hungry for new, higher-performing Intel silicon for the MacBook Air. Indeed, it's unclear whether Apple will just get dibs on Broadwell and launch earlier than the other PC OEMs stuck with Ivy Bridge/Haswell inventory or if Apple will move to a new chassis without upgrading the processor.

Broadwell for Christmas?
Based on this analysis, I expect Broadwell-based systems in limited quantities by Christmas, with Haswell-based systems making up the bulk of the shipments. Further, Intel's refusal to commit to a 2014 launch for Broadwell-K for desktops seems a dead giveaway -- it's not coming until Q1 2015. Notebooks that will benefit from the much lower-power Broadwell chips will likely get the initial run for that Christmas availability.