Six years ago last week, Altria Group (NYSE:MO) and Philip Morris International (NYSE:PM) began trading as separate public companies. Spinoffs have traditionally fared better than the market, and this one was no different; both stocks have far-outperformed the S&P 500 index over the last six years. Here is a look at which piece of the old company fared better and which is the better buy today.

Reason for the spin
As legal liabilities in the U.S. wound down in the latter half of the last decade, regulatory risk became the primary concern for U.S. tobacco companies. As a result, Altria decided to spin off its enormous international operations to focus on cutting costs and raising margins at home.

In addition, management believed that the combined company received a conglomerate discount and the two companies would receive higher valuations as separately traded stocks. That notion turned out to be true; since the spin, the S&P 500 has returned 66% including dividends, while Altria returned 151% and Philip Morris returned 117%. 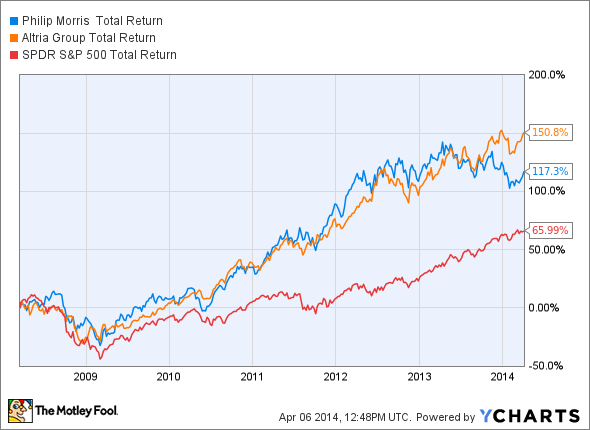 The stunning outperformance of these defensive stocks -- in a bull market no less -- is a testament to the value-unlocking properties of spinoffs as well as the value-creating abilities of these dividend stocks.

Which is the better buy today?
With high dividends and stable earnings, both stocks look attractive today for long-term investors. Altria yields 5% and Philip Morris yields 4.5% while paying out 81% and 68% of earnings, respectively.

However, for non-dividend-focused investors, Philip Morris appears more attractive than Altria. Philip Morris not only has a lower price-to-earnings ratio, or P/E ratio, than Altria -- 15.6 vs. 16.6 -- it also trades in-line with its historical average P/E ratio; Altria trades above its historical average P/E ratio. The story is the same for the price-to-cash-flow ratio, or P/CF ratio. Philip Morris actually trades at a slight discount to its average P/CF while Altria trades above its average. This means that Altria has to grow its earnings and cash flow at a faster rate than Philip Morris just to meet the market's expectations.

However, with both companies generating billions in cash flow each year, the risk of needing to raise capital is small. The real implication of Philip Morris' higher debt load is more subtle. Philip Morris' debt is much higher than its historical average debt load. This means that cash flow that would have otherwise been returned to shareholders will instead be used to reduce debt. This lowers shareholders' returns in a way that is not accounted for in the P/CF ratio.

Without taking debt into consideration, Philip Morris is obviously more attractive than Altria. It trades at a lower P/E ratio and P/CF ratio while offering a similar dividend yield. However, the lower price multiples are likely due to Philip Morris' relatively high debt burden. Cash that otherwise would have gone into shareholders pockets must instead go to creditors. As a result, investors should consider both companies to be close to equally attractive based on historical operating results.

Bottom line
Altria and Philip Morris appear to be equally attractive after six years of market outperformance. With growth opportunities in Asia, contraction in Europe, and uncertainty in the U.S., it is hard to say whether Altria or Philip Morris will grow earnings faster in the next decade. However, the more diversified Philip Morris appears to be the safer bet, all else equal (and, it would seem, all else is equal).